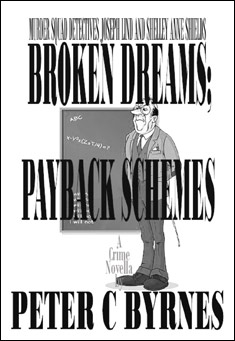 As one door closes another opens.

Lind becomes a father again at the age of forty-eight

A murder of a retired School Teacher in an outer suburb of Sydney leads nowhere with few clues and little forward movement until another homicide points to the same assailant.

But what is the motivation?

The pair of Detectives stumble across an old photograph of an assembly of Teachers celebrating their thirty-fifth re-union. The Group have remained friends from the old Teachers College days to the present time. The photograph giving the first clues to a possible series of connected homicides.

I was a little disconcerted by what was happening!

Here I was on one day thinking of throwing in the towel.

The next, the world was all rosy.

My life was good and I was to become a father again...fast approaching fifty.

I mentioned it to the Police Shrink, letting her know that it was a worry to me.

One minute, my life is full and worthwhile, then I am effected by the completion of a Case and its innocent victims and sadistic assailants, and I seem to plunged into a depressed fugue state. I was sure that the phenomenon had never occurred before in my life.

"Joseph? You've had an up and down life. From childhood, where you picked up the unsaid vibes that your maternal Guardian, your Grandmother, flung out on the character of your birth mother and your drunk gypsy of a grandfather, your possible molestation at the hands of a Teaching Brother before you were a teenager which I might add, you have not dealt with even now...through to your wife's murder and your feeling of inadequacy in bringing up your son..."

She moved the writing pad that she had perched on her knee. Placing it on the desk behind her.

"Your feelings of guilt each and every time that you worked overtime or on an extended shift, concerned that your work was eating into the valuable time with your son...completely natural, I might add. Those subconscious minor worries are concerns that all working parents share...but with you and your penchant to worry about the most trivial matters, they developed into something else entirely..."

"No. I don't think so. Everything experienced throughout your life has an effect on your mental state. I have no reason to believe that you are a manic depressant. In fact, the complete opposite...what I do think is that the insecurities, the concerns that dwelt within you after your wife was killed in how you were to bring up a ten-year-old boy alone, has resurfaced. Fermented by you soon to become a father at such an age with all its challenges...mixing with your basic insecurities of your own childhood. You are a good man, Joe...and your continued close relationship with your son...and his choice of partner, show that you are an acceptable person to again become a parent...and you must realise that Estelle will be there to help shoulder the burden this time...I'm going to prescribe a light Anti-depressant for you. You suffer more from an Anxiety Complex which can be treated. Managed. Handled. I want you to take the drug as directed each day for a period of four weeks. Come and see me then. Say at the end of the month. The last Friday of the month. Ten thirty. OK? Keep a close account of your mood swings and what they involve within that four weeks...and what may trigger those moments of melancholia especially. We may have to juggle with the dosage...Joe? I say it again, you're a good man. A good cop. Don't kill your future with these insecure thoughts. I think you have a tendency to cut off your nose to spite your face...you need to keep a handle on that emotion. Okay?"

"Out on the Picton Road. Behind the new sub-division from where our missing woman was from. We'll have to wait for DNA sampling tests to be run for confirmation. Maybe in a fortnight we'll have some indication."

"Yes, Detective. I cannot see her carting a Jerry Can full of petrol a couple of hundred metres into the bush along a rough fire trail and then setting herself alight...and somehow making those same jerry cans disappear...self-conflagration appears not to be included in her psyche."

There was a certain amount of disdain in the Station Sergeant's voice in answering my question.

"An accelerant was used? There is evidence of it, then?"

"Has the body been removed?"

"Yes, Detective....as we speak. Do you want it left in-situ until you get here?"

by Stellen Qxz She’s an outspoken activist priest who may be headed for premature sainthood. He’s a hometown boy made good......