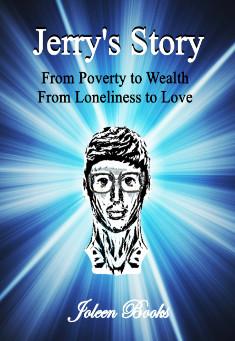 A story about a young man named Jerry who has to make his way back up the ladder in life, from a place of having nothing but his car and living on the streets. And not only does he have to make his way to success in life, he also finds himself searching for true love while feeling this endless mysterious connection to a woman he does not even know.

I was around five years old when I first became interested in the none reality of all things; as I like to call it. I never loved reality and have always thought that imagination was much less boring, and a lot more entertaining than reality. I was though, always feeling too guilty to express this childishness, as my father would not allow it, he was a very logical thinker and hated anything to do with imagination. Until one day when one of my best friends came over to my house and handed me a mask. I realised that, with the mask on, I could express my true nature without feeling any guilt at all. After my friend left, I went and stood in front of my bedroom mirror and I took the mask, that my friend had conveniently left at my house, and I put it on. I felt such a rush go through me; I began to play around in my bedroom with the none reality, which at that time were my imaginary friends that I created with the mask on.

When I became a teenager, I was not the best looking guy, so none of the girls were interested in me and I ended up creating an imaginary girlfriend for myself. She became my entire reality. I would sleep on her chest every night; which was my pillow. I would have fantasies about her and about how she looked; exactly how I had created the image of her in my mind. I found that she was one of the best things my mind has ever created. She never asked questions; she just understood. When I would lay on her chest at night feeling down about something, she was just there, I didn’t need to tell her what happened, she already knew and she understood a one hundred percent how it felt within me. I could lay on her chest and feel horrible and she was just there.

The problem came when I met a real girl that I liked and she actually liked me too. I mustered up the courage and asked her out on a date and as we were out watching a movie, and the movie turned into a kiss later that evening when I dropped her off at her house, I realised how guilty I felt. I felt like I betrayed my girlfriend; the one I created in my mind. I could feel her anger and no matter how much I knew that it was absurd, as my “girlfriend,” at home is nothing more than my own mental construct – I still felt guilty.

I went home and like many other nights, I made love to my imaginary girlfriend. The next day, back at school, the girl I liked took a huge step and asked me out. That night I brought her home and we made love, it was my first time with a real girl. Our relationship, my relationship with the real girl, continued on for about a month until we had our first actual fight. I needed someone to be there because I had a horrible day and all she did was ask questions about it, and then she tried to fix my problems, she did not just understand like my imaginary girlfriend did. I got mad at her, we had a fight and I rushed home. At home I wondered what had happened. Then it hit me like a meteor falling straight down crushing me entirely. My imaginary girlfriend is me, that is why she is do damn good at knowing how to work with me, since I created her, she is me, she is a part of me, and it won’t get any better than her – unless she became a real human being somehow. That is why I felt guilty about being with someone else, I felt like I was cheating on me. The real girl is not me, she is another person and if I couldn’t accept her the way she was, and we couldn’t work out a way to get along despite our differences, and different opinions on stuff, we would not work out – which we didn’t. Our relationship ended, I ended it deciding that I was better as a girlfriend, I wanted to be with me. That is when I also realised just how powerful imagination really is, imagination really can give you infinite times more than reality ever can – it even has the power to create. And people underestimate just how powerful of an effect imagination has on all of us in our everyday lives. In reality, my imaginary girlfriend helped me, in some awkward way, to fall in love with me – that is a blessing that very few have.

by G. A. Henty A classic tale of nobility, loyalty and courage set in 11th century Britain. It relates the adventures of Wulf, a young,......

Fashion Figures: How Missy the Mathlete Made the Cut

by Melissa A. Borza Missy Maker is a middle school girl who loves math and fashion. She sees math in everything she does. She tries to hide......