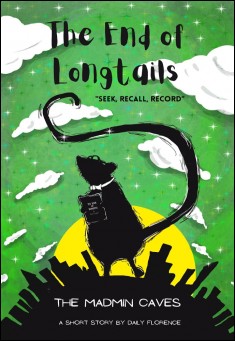 This is the FIRST short story in a set of short space stories from Orb Central Library. In the far reaches of the Canis Major Dwarf, on planet Orb, a young longtail named Denver works at Orb Central Library as a librarian, where he fights fake news alongside his fellow longtail species and collects moments (otherwise known as stories) to submit to the Orb Central Library for all of eternity. With dreams of rising up the ranks and becoming a space collector — just like his grandfather — so that he can one day travel the universe to collect moments from outer space, Denver decides to break longtail tradition and form a crack-fake-news team made up of the other animals of planet Orb to help him in his mission — a decision that is to set off a cataclysmic chain of events. In this short space story, Denver meets his new recruits and starts his first day as team leader of the newly formed story division when he goes and makes one huge mistake on his walk to work — a mistake that could cost him his job. With Orb hitting a panic scale seven, a team of dysfunctional new recruits, a bunch of spiritual moggy burners out to sacrifice him, and Vince, a fellow team leader who has it in for him, hot on his tail, Denver has his work cut out to submit his first-ever moment to the Orb Central Library before sunset.

It all started with a meow, a long, lingering, hypnotic meow that made my ears twitch to attention. In front of me that day stood Kitty Stevens, a tall, slender and oh-so-graceful ex-student of the University of Cat. As I slowly pushed the sign-up form toward her, I studied her whiskers as she spoke, it seemed that despite her words being directed at me, her eyes were casually studying the empty room as if a large crowd had gathered and I was the least interesting animal in the vicinity.

Her attention, however, suddenly snapped back in my direction.

Kitty Stevens took a seat in the empty room and began filling in a form as I tried to look busy, polishing my spectacles and doing my absolute darnedest not to look at the clock.

Today was such a big day for me, I was making history in the Orb Central Library with my brand-spanking-new diversity programme. You see for as long as any of us on Planet Orb can remember, us Longtails have been the only species of animal to ever set foot in our beautiful Library — until today that is.

Throughout history, Longtails have been referred to as 'communicators', a gifted race with the ability to store and recall every moment that we have ever been told or lived. We are known as “the preservers of moments, the seekers of fact”.

As natural as it is to you that you must sleep, us Longtails must seek, recall and record: with Orb Central Library being our epicentre of worship to our craft.

Soon enough Kitty Stevens had finished filling in her form. 'Would I be the only recruit this year?' she said as she picked fur from her pristine dress.

I placed my spectacles on, fought off a nervous giggle and stared intently at the door.

But just as the internal panic and hallow silence in the room began conjoining inside of me into a thundering volcano, the door burst open and in walked a Deer wearing a stripy top and a pair of creased chinos. But rather than acknowledge either of our existence, the Deer headed straight for an empty seat, plonked himself down and face-planted the table with a deep sigh.

Undeterred, I didn't stop for so much as a single moment to acknowledge the weirdness of his entrance. Rather, I raised my shiny nose and shouted over to him in a highly professional tone. 'Hello Sir, if you could just fill out this form then that would be fantastic,' and began waving a sign-up form in his direction.

Without moving an inch, the Deer raised one hand above his head and began grasping at the air, causing Kitty Stevens to swing her head back around and shoot me a cold stare. I still wasn't owning anything. Instead, I scurried past her, slammed the sign-up form into the Deer's hand and sauntered over to the door where I hung my head out, leaving the rest of my behind positioned firmly inside the room.

'Of course, you're both terribly early,' I shouted back to the pair as my head searched the long winding hallway for even so much as a hint of a stray animal. 'Which, and I must say, is awfully decent of you both considering this is your first day.'

What the hell was I on?

I gripped my mouth in horror as I imagined the confused look that was now sweeping Kitty Steven's face as she caught sight of the clock — she’d been bang on time. The Deer, I was fairly certain, I didn't need to worry about.

But in the distance, walking aimlessly in various directions, I spotted a slow-moving elderly Rhino hanging off the arm of a miffed looking Giraffe.

'Yoo-hoo, here, I think you're both here,' I shouted, waving my arms frantically in the air.

They both trekked toward me. And, whilst at first, I felt thoroughly delighted to make their acquaintance, I noted the feeling wasn’t mutual as they approached at the speed of a slug.

The elderly Rhino waved her walking stick at me. 'Where're the signs? Young man, answer me now, how do you expect us to find our way around with no signs? How did we even get here?'

The Giraffe peeled the elderly Rhino’s hand off his and glared at me.

She was right, I'd totally forgotten to put signs up. Orb Central Library was a maze of underground tunnels that Longtails had no problem navigating but the same can’t be said for other animals.

'I'm terribly sorry,' I said, ushering them inside.

I studied the Giraffe as he past, there was something about him making my whiskers stand on end. 'Do we know each other?' I asked. But rather than stop to greet me, he mumbled something then waltzed straight in the room.

Right behind them, a buffalo in a dapper black suit followed by a well-dressed Rabbit stepped through the door. I sighed with relief as I ushered them in.

It was hardly the turnout I'd expected for my new diversity programme, but at that point, if I could rate my optimism on a sliding cheese scale, ten lumps of cheddar being 'I think I'm going to take over the world' and no cheese being 'I may as well just die now', then I would comfortably be sitting at an eight with my relentless positivity and winning smile.

So there'd been a few mishaps, true, and neither was it the turnout that I had expected, also true, but, you know what, they looked a respectable bunch and I couldn't wait to get stuck into my welcome speech, followed by an inspiring tour of our spectacular library, which I was sure they were going to love. I slapped my little hands together and skipped to the front of the room and got started.

'It's just so lovely to have you all here,' I began. 'You are all the first of any other race of animal on Planet Orb to so much as step into our beautiful library, let alone get a job as one of our employees. You're making history as we speak.'

I looked around for even the faintest bit of enthusiasm but noted a room full of deadpan faces.

My cheese scale slid down slightly but I forged on.

I Don't Want That in my Ice Cream

by George Fratton Sophie finds herself saying hello to a huge apple in a rocking chair and swimming in a cup of 'toad tea'. Aliens......