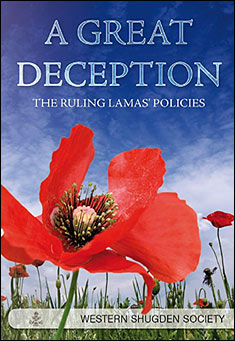 With this book the Western Shugden Society wishes that individual people around the world will use their influence to help millions of Buddhist practitioners who are presently suffering religious persecution instigated by the Dalai Lama of Tibet. For this reason we are making the e-book available at a complimentary price. We ask you to read this book and then ask the Dalai Lama to stop this persecution. For his own personal political ends the Dalai Lama is persecuting Buddhist people who practise the Buddhist Deity Dorje Shugden.

The explanations given in this book are to encourage people not to follow or be influenced by ‘Lama Policy’, which like a drug causes people to be confused about the real nature of Buddhist practice. In this context, ‘Lama’ refers to the Fifth, Thirteenth and Fourteenth Dalai Lamas of Tibet. The policy of these lamas has been to use religion for political aims, thus causing suffering to millions of people from generation to generation. Because of the Fifth Dalai Lama's policy of mixing religion and politics, the Nyingma, Sakya and Kagyu traditions of Tibetan Buddhism rapidly declined and, as a result, for hundreds of years millions of people who followed these traditions experienced great difficulties. Today, some people from these traditions say that it was followers of the Gelug Tradition who caused their tradition to decline, but this is untrue. The Gelugpas themselves had no political power. It was the Fifth Dalai Lama who alone used his political power to destroy the development of these traditions, both spiritually and materially.

The Fifth Dalai Lama achieved political power in the 17th century through the military support of Gushri Khan, the ruler of the Qoshot Mongols, who helped him fight a war against Karma Tenkyong Wangpo, then the principal ruler of Tibet. At the request of the Fifth Dalai Lama, Gushri Khan sent his Mongol armies into Tibet, and as a result won the war. Karma Tenkyong Wangpo was captured and later executed, and the Fifth Dalai Lama achieved political power and became the ruler of Tibet. This event alone shows the nature of Lama Policy. The Fifth Dalai Lama was an ordained Buddhist monk having the commitment not to kill or otherwise harm others. He therefore acted directly against the spiritual commitments laid down by Buddha. This is a very shameful example for a Buddhist monk holding the position of a high lama, a supposedly holy being.

In their teachings the Fifth and Thirteenth Dalai Lamas talked about compassion, but they behaved like dictators creating so many problems for their society. This is true also of the present Dalai Lama. Despite this hypocrisy, many people because of their extreme religious view and blind faith still believe that these lamas are holy beings. In Tibetan society, anyone who has views and intentions that are different from those of the Dalai Lama is immediately accused of not being Tibetan; they are criticised, threatened and ostracised. This happened in the past and is happening to Dorje Shugden practitioners today. From this alone we can see that this Lama Policy continues to have a devastating effect on society. This problem cannot be solved unless the lama himself changes his own attitude.

The Fifth Dalai Lama was the founder of Lama Policy, which he called ‘the union of religion and politics’. The nature of Lama Policy is deceptive; its function is only to mislead people and to use religion for political aims. It is like a rainbow, which from a distance looks beautiful but upon closer examination is seen to be completely empty and hollow. The lamas who have principally upheld the policy established by the Fifth Dalai Lama are the Thirteenth and Fourteenth Dalai Lamas, and of these two the policy of the present Dalai Lama is the worst.

Constitution and Government of the United Kingdom

by Wikibooks This free book comprises two parts, the first is the political history of all monarchs in succession. The second part of......

An Easy Route to Peace

by Roy T James Why is our society always in a state of boil? A small perturbation can lead to a world war, which could exterminate the......