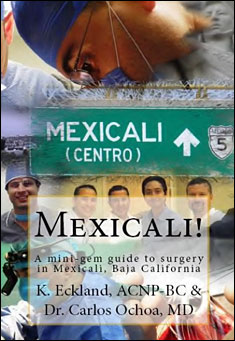 Just across the street from the modest city of Calexico lays a modern day Goliath, the million person metropolis of Mexicali, Baja California. This close proximity has attracted medical tourists to this heat baked desert city in droves.

In a dramatic change from previous Hidden Gem titles, the authors of Mexicali! bring a more casual look at the good, the bad and the ugly side of Mexicali while maintaining a critical and objective look at the burgeoning medical tourism industry in this border city.

K. Eckland, ACNP-BC is a nurse practitioner in cardiothoracic surgery and medical writer specializing in medical tourism. This is her fourth offering in this genre.

Dr. Cuauhtemoc Robles Cairo, a professor of architecture at the Universidad Autonoma Baja California and expert of the architecture of Mexicali, with several additional books to his credit.

While many of my readers are more familiar with my previous guidebooks that specialized in the medical tourism genre, this offering is different.  This book was created during my time as a student in Mexicali, and is not intended to be a comprehensive guide to the surgical services of this city. In contrast to my prior books, which provide readers with critical analysis and objective information on hospitals,  facilities  and  procedures  in  Latin  America,  this  book  gives  more  a  personal  look  at Mexicali.  The surgeons interviewed were, in part neighbors, colleagues and people I encountered during my day-to-day activities as a student.  This creates a significant but unavoidable bias that must be acknowledged here, since surgeons who encountered me in the role of a student were probably more likely to consent to be interviewed.  While I attempted to balance this by specifically seeking out other surgeons from different facilities across Mexicali, I quickly realized that this is not Bogota,  and  in  many  cases,  even after  formal  introductions,  surgeons  were  unwilling  to  be interviewed.

While Mexicali was written with a different audience in mind, I created it for the same reason as all of my previous works – as a labor of love, to provide readers with more information on topics essential to their health and well-being in an age of international health care.

This volume is more casual and relaxed in nature and was created to serve as an informal guide to friends, families and others traveling to Mexicali, Mexico. I created it based on my observations during the several months I lived and studied in Mexicali, Mexico.   As such – this is not a definitive or exhaustive guide to the city, but just some shared tidbits, news and other information. During my  time  in  Mexicali,  I  came  to  love  this  charmingly  chaotic  city,  and  its  friendly  and  kind inhabitants.

While I’ve written several books, I don’t make my living as a writer.  I am a nurse by trade, specifically a nurse practitioner in thoracic surgery.  I wasn’t looking to write another book when I came to Mexicali.  Initially, I traveled here to interview a surgeon for another one of my projects.1 But after interviewing Dr. Carlos Cesar Ochoa Gaxiola, and following him around for an exhausting 43 hours in a 48 hour period – I knew that I needed to return to Mexicali.  Not as a writer, but as a student.

As a nurse practitioner in the eastern United States, the majority of my experience in thoracic surgery was related to the treatment of cancer; esophageal, lung and mediastinal cancers with some occasional infectious processes and other pathologies mixed in.  In the short time I spent with Dr. Ochoa during my first few visits, I knew all of that was about to change.  The realm of thoracic disease is heavily correlated with the demographics of the area, meaning that in the wealthier communities of the United States, surgery for tuberculosis or advanced pulmonary infections are relatively uncommon.2   However, this is not the case in a city like Mexicali, which draws many of its clientele from outlying rural or more impoverished areas.  In these areas, diseases like tuberculosis, complicated pneumonias and advanced empyemas are endemic.