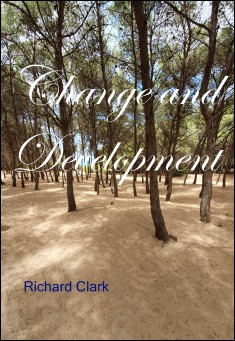 Change and Development
By Richard Clark

Following on from Life and Sentience this book looks at how human life developed from about 200,000 to 300,000 years ago to more modern times, not from a religious or scientific point of view but from a perception of the makers of human life, the energies involved and how those energies were used to advance humans.

In Life and Sentience it was said that humanity is on a journey where the physical body is developed by the Physical Sentience of this universe and when that development has reached a certain point, that is where a brain is staring to form, Brain Sentience takes up residence in that brain and takes over the process of advancing human systems and processes, energy and mental development, effectively advancing humanity.

All physical life up to and including pre-humans had been developed by the Physical Sentience of this universe passing blended energy from the sun into cells it had put together producing different forms of physical life with a developed body and basic systems, but not much more than that.

To continue development humans had to emerge filled with passion and drive, ideas and the ethics, virtues, skill, talent and everything else needed to advance humans.

Previously energy essence, which controls the way energy works, was passed into very early human males to advance the immune and nervous system, form pathways in the brain and the senses and lay down the basic framework for all the electrical systems in the male body.

Over time pre-humans started to appear the forerunner of modern humans, but the problem was the suns energy couldn’t deliver the content needed to advance the pre-humans.

The sun’s energy could not develop those pre-humans to have drive, passion, emotions, ethics and virtues, intellect, advanced mental functions and a personal self leading to complexity and the ability to gain understanding that Previous Life and Sentience required from us.

Using the suns energy Physical Sentience had developed physical life to about the level of primates, but couldn’t develop life any further.

So Brain Sentience took over the development of humanity firstly through a program of selectively breeding the pre-humans of thousands of years ago recycling their energy to accelerate their development.

Brain Sentience exists in all mobile physical life that has a brain and is an extension of Previous Sentience, which it is still connected to like a power socket in a home is connected to a power station.

This new system would move the development of other mammals forward as well, but not too far bringing them to the point where they have today gained some basic emotional and mental content.

In the background to this driving human development is Brain Sentience, which has moved humanity to where it is today and is still working expressing itself differently through females and males.

Brain Sentience used energy essence from previous universes, passed into males through viruses, to lay down essential systems and processes in pre-human males, improving them physical and then the energy from the soil and bacteria of this universe were used to advance females.

The two were kept separate although both virus and bacteria act as receivers.

Only males received energy essence and virus energy through viruses and only females receive soil and bacterial energy from bacteria.

It also allowed the Brain Sentience in each a different expression through them with females becoming internal and more self focused and males becoming more external and physical.

Programming ideas received from Previous Life and expressed through males by Brain Sentience programmed food energy enabling males to build and construct making males more interested in things and structures, but that all came much later.

Females also gained the energy of bacteria linking them to nature, the world around them and improving the way their internal systems worked.

During the transformation from pre-humans to modern humans bacterial energy was used to improve the immune and nervous system and the brain.

These main systems in humans were already in place formed from energy essence and adding bacterial energy to them added to their abilities and functions especially the immune system and brain.

The arrival of the personal self about 6,000 years ago changed the energy content of humans from active to violent with males expressing that violence physically and females expressing it emotionally.

The Psychology of Motivation

by Richard Brown Do you usually feel demotivated to pursue your dreams? Do you lack the drive to push through difficult situations? Are y......

by Tom Dingus Driving is risky business. Only cancer, heart attacks, and strokes cause more unintentional deaths among the general pop......