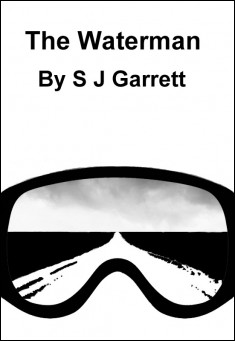 Book 1: Brothers By Numbers
Book 2: Beautiful Beautiful
Book4: The Some Of Many

‘The Waterman’ is the third instalment of this series and takes place early in the twenty-sixth century where there are just a hundred million or so people remaining on the Earth that can still call it their home. They are all that remains of a former planetary population that once numbered in the billions. Some of the remaining vestigial population on Earth live in small rural colonies where their individual populations are limited to two hundred colonists per settlement and they fought long and hard against the Republic to win that and the right to not have to work up top. The remaining vestigial populations on Earth live in one of seven city states that are barely tolerated by the governing Republic.

There is however, a young upstart city vying for city state recognition called Vancouver Island that has found its self fighting for its very existence under a deluge of marchers and refugees from all across rural America who want to settle under the security of a new recognized city state. They only want peace. They only want security for themselves and their loved ones. This is the story of their struggle and it’s told by a selfless common hero named Curran – the waterman.

For the readers of the earlier e-novel: ‘Brothers By Numbers’, the reader may recall the predicaments of those who were being evacuated from the same fated city at a transporter station and those who manned the city’s defences the best they could on that fateful day. This is their story.

I am a waterman. I’m sixteen years old and nearing the end of my apprenticeship.

In some places, such as most of the near and deep space colonies, being  a waterman more or less meant that I’d be the local plumber and that I’d for certain have a lowly place on the list of the colony’s tech men. But where water is difficult to find, you become the most important member of the colony after the acting mayor that is.

No water, no life.

My journeyman: Taffy,  - has managed the needs of our colony for twenty-five years now but bad habits have taken a toll on his health of late. And in his day I’ve heard that he was once a legend of sorts for his divination skills.

“All apprentices must learn by the book, Curran. We learn the right way first and then we’ll see if there’s some of that magic in you that they say your mother had.”

I remember those words like they were yesterday. Taffy was two years younger at the time and I was as new and green as they come. I recall being quite apprehensive, shy, and quite uncomfortable about my appointment back then. There were surely many better qualified candidates for the apprenticeship out there I thought, but I however had a history.

I’ve not met my mother. It would have been nice had I, but many people have no mother technically speaking. Just consider the New Eurons – they come from a butcher. They’re spat from a machine like cookie dough. They all look the same.  If having a mother that I’ve never touched or hugged, helps to distinguish me from the likes of them: I’ll take it.

And of course, as fate would have it my mother was also a waterman. Her colony however was located more than two thousand kilometers from here on the shores of the Pacific. Sea water can be made potable but the real difficulty in her case was collecting it safely. There was some serious competition to contend with when it came to collecting sea water – about three of them; big bruisers, too. Between the three of them they have the monopoly for all the open salt and fresh water resources on Earth. How about that? There was the New Euron Water Group, the Inter Stellar Water Corporation and of course – JUNCKE; they’re into everything.

Anyhow, my mother was sucked up into one of their water spouts. These water spouts were man-made micro storms or vortexes that lifted the sea water up and into the lower atmosphere where it was collected and transported away by tankers.

You can’t blame the colonists for getting too close to those spouts because there was an immense amount of fresh protein left behind as the local shore lines would recede when the water spouts were active. Even here, where it’s dry as a bone, we contend with weather vortexes of our own as often as once a day and ours aren’t man-made and ours seemingly have a mind of their own like the devil himself our elders say.

But regardless, man-made or otherwise you need god’s good guidance or the good sense to get out the way when a vortex was around. All my short life, I’ve been teased for being the son of an unfortunate fool or hero depending on how you want to look at it. It’s what got me into this whole thing and ironically only a fool would say no to the job because there are lot of worse occupations – like working on top for instance.

If you aren’t seriously gifted, clever or had some seriously debilitating disability – you worked on top. The colony needed your income. It didn’t matter if you were done in ten years or had come back crippled – your colony would take care of you the best it could till you were dead.

Pouring forms wasn’t for me, not if I could help it. That’s where they’d normally start you up top - makin’ concrete. Twelve hour shifts, and longer when required. Freezing till you turned blue on build-ups and tear-downs and swimming in a pool of your own sweat from the neck down when they were curing the forms. People would tell you all the time that you were making good money, but they weren’t the ones being irradiated in an oven or frozen in a weightless hell. There were some up top that believed that shit even though the fact of the matter was that for every day you spent on top your life would become a week shorter.
So much for man’s ‘Immortal Revolution’.

‘A man can live forever now’, - they’d tell you when you were little and unaware, but just not you you’d find out later. Your heroes; they get to live forever. The ball players, the big media types, the very top of the tech men; they are the immortals. And, those precious extra days they get to live were on the backs of others – namely the colonists.

I’ll be one till I’m dead. I know my place. If you’re not New Euron and you still live on Earth these days as I do; they call you the vestigials when they want to be nice and the ‘vesticles’ as in testicles when they want to be nasty. We fought a war more than a hundred years ago to gain our colonist status. Vestigial colonist status on earth means never living past forty for most of my brethren and that makes me want to be the best waterman I can be for them.

The Some Of Many

by S J Garrett Book 1: Brothers By Numbers Book 2: Beautiful Beautiful Book 3: The Waterman The novel ‘The Some Of Many&rsq......

by S J Garrett Book 1: Brothers By Numbers Book 2: Beautiful Beautiful Book4: The Some Of Many ‘The Waterman’ is the......