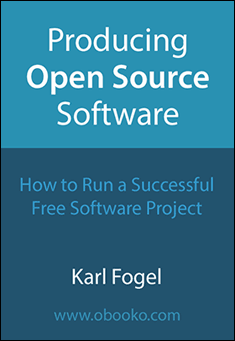 Producing Open Source Software is truly the first e-book of its type: it's a handbook that clearly explains almost every associated concept, technology and terminology commonly communicated by free software developers. And all this without the assumption that the reader has any in-depth familiarity, although it is suggested readers do have some familiarity with general, established software concepts.

This previously under documented and sparsely commented information is brought together in a single digital manual. And, practising what is preached, the book itself is open source and in this case distributed by obooko under a Creative Commons license (which you will find at the end of the book.)

This e-book may also serve well as an introduction for journalists, corporate managers and personnel; in fact and anyone else who is engaged with and interacts with the world of free software. Professionals and specialist experts by comparison will find the book also contains useful information for working with the project management of free software development. Producing OSS offers not only advice to those commencing new projects, but an opportunity for managers of existing open source projects to compare lessons learned with the best practices laid out in the book.

We tend not to hear very much about the failures. Only successful projects attract attention, and there are so many free software projects in total1 that even though only a small percentage succeed, the result is still a lot of visible projects. We also don't hear about the failures because failure is not an event. There is no single moment when a project ceases to be viable; people just sort of drift away and stop working on it. There may be a moment when a final change is made to the project, but those who made it usually didn't know at the time that it was the last one. There is not even a clear definition of when a project is expired. Is it when it hasn't been actively worked on for six months? When its user base stops growing, without having exceeded the developer base? What if the developers of one project abandon it because they realized they were duplicating the work of another—and what if they join that other project, then expand it to include much of their earlier effort? Did the first project end, or just change homes?

Because of such complexities, it's impossible to put a precise number on the failure rate. But anecdotal evidence from over a decade in open source, some casting around on SourceForge.net, and a little Googling all point to the same conclusion: the rate is extremely high, probably on the order of 90–95%. The number climbs higher if you include surviving but dysfunctional projects: those which are producing running code, but which are not pleasant places to be, or are not making progress as quickly or as dependably as they could.
This book is about avoiding failure. It examines not only how to do things right, but how to do them wrong, so you can recognize and correct problems early. My hope is that after reading it, you will have a repertory of techniques not just for avoiding common pitfalls of open source development, but also for dealing with the growth and maintenance of a successful project. Success is not a zero-sum game, and this book is not about winning or getting ahead of the competition. Indeed, an important part of running an open source project is working smoothly with other, related projects. In the long run, every successful project contributes to the well-being of the overall, worldwide body of free software.

It would be tempting to say that free software projects fail for the same sorts of reasons proprietary software projects do. Certainly, free software has no monopoly on unrealistic requirements, vague specifications, poor resource management, insufficient design phases, or any of the other hobgoblins already well known to the software industry. There is a huge body of writing on these topics, and I will try not to duplicate it in this book. Instead, I will attempt to describe the problems peculiar to
free software. When a free software project runs aground, it is often because the developers (or the managers) did not appreciate the unique problems of open source software development, even though they might have been quite prepared for the better-known difficulties of closed-source development.

One of the most common mistakes is unrealistic expectations about the benefits of open source itself. An open license does not guarantee that hordes of active developers will suddenly volunteer their time to your project, nor does open-sourcing a troubled project automatically cure its ills. In fact, quite the opposite: opening up a project can add whole new sets of complexities, and cost more in the short

term than simply keeping it in-house. Opening up means arranging the code to be comprehensible to complete strangers, setting up a development web site and email lists, and often writing documentation for the first time. All this is a lot of work. And of course, if any interested developers do show up, there is the added burden of answering their questions for a while before seeing any benefit from their presence. As developer Jamie Zawinski said about the troubled early days of the Mozilla project:

Open source does work, but it is most definitely not a panacea. If there's a cautionary tale here, it is that you can't take a dying project, sprinkle it with the magic pixie dust of "open source," and have everything magically work out. Software is hard. The issues aren't that simple.

Ruby on Rails Hints and Tips for Professionals

by Peter Ranieri Over 200 pages. Subjects covered include: Getting started with Ruby on Rails Routing ActiveRecord Views Ac......