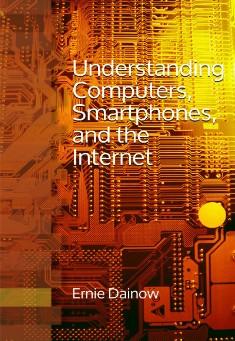 This book is for people who want to understand how computers work, without having to learn a lot of technical details. The most important guideline in writing this book was to be concise and simple. The book provides clear explanations of hardware, software, the Internet and smartphones, using examples and diagrams that are easy to follow.

Most introductory books about computers are long, detailed technical books such as those used in a computer science course or else tutorials that provide instructions on how to operate a computer with little description of what happens inside the machine.

This book fits in the large gap between these two extremes. It is for people who would like to understand how computers work, without having to learn a lot of technical details. Only the most important things about computers are covered. There is no math except some simple arithmetic. The only prerequisite is knowing how to use a web browser.

As an alternative or adjunct to reading the book, you can watch a series of short videos by going to youtube.com and searching for “Understanding Computers, Smartphones and the Internet”.

Only current day technology is covered. People who are interested in learning about how computers evolved from the earliest machines can read the companion book “A Concise History of Computers, Smartphones and the Internet”.

The power of software to do so many things has revolutionized many industries by providing great cost reductions and/or new ways of doing things. Many new start-ups have been created based on their innovative software.

Some of the revolutionary applications of software have been:

Accounting - one of the first applications to be automated with computers, first large companies using mainframes and then small and medium companies when less expensive microcomputers became available.

Spreadsheets - tabulating information in tables with simple calculations. Advanced users are able to automate various series of calculations, almost like writing programs, without having to become computer programmers.

Computer-Aided Design (CAD) to create and analyze designs and prepare data for manufacturing.

Computer graphics - has had a significant impact on many types of media. It has revolutionized film animation, movies, advertising and graphic design.

Games - are a huge market that appeals to many age groups. There are many game platforms: consoles that connect to a TV (Sony PlayStation, Microsoft Xbox, Nintendo), games you can play on your computer and your mobile phone, and online games you can play over the Internet. Improvements in the video quality of games depends a lot on hardware advances. Leading edge game software has driven a lot of the computer graphics industry and has led to the development of special graphics chips.

Education - many universities and other educational organizations provide online courses and training over the Internet.

Science and Research - in physics, chemistry, astronomy, biology, medicine. For example, the Human Genome Project that identified and mapped all the human DNA in 2003 would not have been possible without software.

Social Networking - is based on providing a service where members can set up a network of friends and communicate with them by posting messages, photos and videos. When the Internet became widely available and made it easy for people to join such services, social networking grew very rapidly. Many people have found this a better way to stay in touch and communicate with friends than using older technologies like telephone and email.

Although there are quite a number of different social network systems, Facebook has become the dominant force, with over 1.5 billion members. Twitter is a more public social network that allows people to “follow” anyone else or topics on Twitter. Twitter has become an important source for breaking news which often appear on Twitter before the traditional news media or other web sites.

Artificial Intelligence/Robotics - research is complicated and progress has been incremental. There is useable software for speech recognition and language translation and driverless cars are coming. Specialized robots have been successful in factory automation and there have been recent advances in more general purpose robots.

Important Linux Commands You Should Know

by Manjunath.R The command-line interface is one of the nearly all well built trademarks of Linux. There exists an ocean of Linux comma......

Introduction to Git and GitHub

by Bobby Iliev This is an open-source introduction to Git and GitHub guide that will help you learn the basics of version control and s......