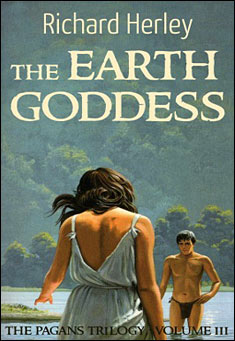 The Earth Goddess
By Richard Herley

Book III of the Pagans Trilogy.

It is 3000 BC. The cult of the Earth Goddess is controlled throughout the vast empire of Europe by the secretive and unscrupulous Red Order, the priesthood which manipulates all power for its own ends. The land that is now called England has been annexed and its lord, Brennis Gehan Fifth, betrayed and murdered. The Lady Altheme, his consort, has escaped to the forest. She is carrying his son, Paoul, rightful inheritor of the Valdoe domain.

In the grounds below his fortress Lord Heite, Gehan of the Gehans, had built a small pavilion by the lake. On spring mornings such as this he liked – when the burden of his duties allowed – to come here to meditate or perhaps to receive in privacy an especially favoured guest. Constructed of fragrant timber, five-sided, and with a gently sloping roof, the pavilion stood at the water’s edge and allowed the occupants to hear each nuance of the quiet surge of ripples on the shore.

The sun had just come out: the ripples were being repeated as a network of light on the cedar uprights and supports, on the lintel and across part of the ceiling. A chiffchaff began to sing from the leafless sallows. Lord Heite looked down again, at the water, and breathed deeply. He was at peace. He had made the right decision.

A dry branch snapped on the path behind the pavilion. His bodyguards were waiting at a distance, on duty in the grove. They had let his guest come through.

“Please join me, General Teshe,” he said, and looked round.

The general mounted the steps and, bringing his bulky form to a halt, gave a correct but informal salute. His eyes were friendly; his broad, blond-bearded features were about to break into a smile. He had been travelling all night, but he looked, as ever, immaculate. The grey leather of his dress armour creaked softly as he accepted the unspoken invitation to seat himself beside his lord. In the regulation manner he drew about him his finely woven cloak, grey and darker grey, edged with black serpents along the hem. His kneeboots gleamed. Even when seated, he kept his shoulders perfectly square; yet he was also at ease. There was something permanent about the man, timeless, infallible. It had been the same twenty years ago, when he and Lord Heite had been boys together at the academy. “Well, Kasha,” said Lord Heite, free now from the ears of his entourage. “Tell me. How are you?”

“Growing older, liege.” The smile broadened; his teeth were white. “The pagans in my care would age even Heite Gehan.”

“How did you once describe them? ‘Fractious’? Was that the word?”

“Let us say that their resentment of authority is second only to their idleness.” “On the contrary, Kasha. You have tamed them remarkably quickly. The returns from your province tell me so.”

“You flatter me, my lord. Much remains to be done.”

“But not by you.” For a moment Lord Heite regarded the peaceful waters of the lake. Then he said, “Do you remember my kinsman, Brennis Gehan Fifth?”

“His father tried to make the island country independent of the mainland. When he inherited Valdoe, Brennis Fifth pursued much the same idea. We tolerated the position until he, fortunately or otherwise, went out of his mind. It then became necessary to replace him.” “With General Hewzane,” General Teshe recalled.

“Exactly. That was seven years ago. Did you ever meet Torin Hewzane?”

“Well, now of course he is Lord Brennis. Unlike you, Kasha, he lets such titles go to his head. I must say he has disappointed us. A mistake was made. We misjudged him.”

by Michael DiBaggio Justin Agnarsson is stationkeeper and lone crewman of South Atlantic House of Refuge #49, a floating sanctuary for the t......