Call Me Montana - The Beginning
By J. E. Richman

This is the first of a series of young adult novels that follow sixteen year old William Dean Ritter, aka "Montana" from his Montana farm to a Wyoming cattle ranch, Dodge City, Kansas and Texas. Through the several adventures he encounters in pursuit of his dream to become a cowboy, something unexpected happens - he becomes a man.

The saga starts with "Call Me Montana - The Beginning," where you get to know the boy and his famous horse "Spirit." The characters and plot lines harken back to the best of the western serials of the 40's and 50's, where morality, integrity and self reliance ruled the day. This 195 page novel is suitable for young adult readers.

I remember that morning like it was yesterday. The sky was blue as a robin’s egg and there was a light breeze coming up from south. I was just two hours into my journey, and already having second thoughts about it.

New things are always a little scary at first, and my decision to leave home gave me pause to consider how my life was about to change. At the same time, I took comfort in the familiar scenery around me. Over the course of my youth, I’d ridden that trail many times, and knew it well, but as much as I tried to concentrate on the trip itself, my mind kept flashing back to the look in my mother’s eyes as I’d said goodbye, just hours before.

Neither of my parents had been all that comfort-able with my decision to leave, but in the end they both seemed to accept that it was going to happen one day, anyway. I know mother knew it because she was the one who’d exposed me to the rest of the world in the first place. Why would she have John E. Richman
had me read all those books, if she didn’t think I was actually going to go?

Father’s reaction had been a little different. At first, he was dead set against my leaving. After a while though, once he could see there was no talking me out of it, he seemed to get a little more comfortable with it.

It would be another fifty or so miles before the scenery began to look new to me. I supposed it would probably not be much different for a while, but I was watchful for when it would change from old to new. I expected there’d be more adventure in looking at scenery for the first time.

My given name is William Dean Ritter. At home they called me Billy, but most folks call me Montana. I suppose it’s because shortly after the war ended, my folks’ wagon train dropped them off near a huge patch of nothing called Bighorn Lake in Montana country. There’d been some sort of argument between the wagon master and my father about directions. Story goes, they were on their way to Oregon, but got a little off the trail. To this day, my father maintains it wasn’t his fault.

I was born and grew up on a small, bottom-land farm that bordered Bighorn Lake where the soil was rich and the winters were hard. We grew potatoes, wheat and barley, but mostly potatoes. Seems they liked the moisture in our little valley.

My sister Mary came after me and both of us were home-schooled by our mother, who’d gone to college back east.

It was a good life, but at sixteen I’d learned just about everything there was to know about Bighorn Lake, and I was bored. I planned to work my way south to the Wind River country of Wyoming, where I heard a good cowboy could get a job. Now, truth is, at sixteen I wasn’t really a good cowboy. I reckon I wasn’t a cowboy at all, but I had lots of ambition. 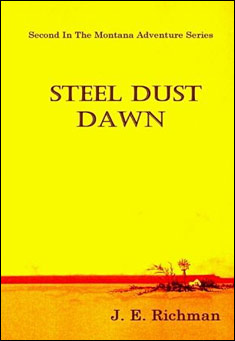