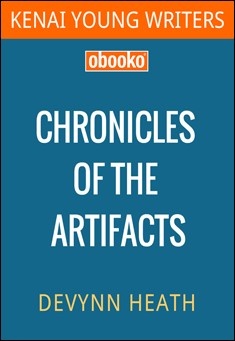 Chronicles of the Artifacts
By Devynn Heath

This story starts out on a very uneventful day, in a strange house, on a normal street. And in that house a semi-ordinary boy and his semi-ordinary sister, plus their parents, live quite comfortably. These semi-ordinary twins and their parents actually enjoy the things most teenagers abhor. Yes, it's terrible, they love to read. They love to read all kinds of different books, from big books, little books, to average sized books, boring books (although they don't prefer them) and exciting books. They read fiction, science fiction, history books, nonfiction, adventure, fantasy, and countless other genres from those large and small sized books. Their house is full of books, every nook and cranny holds some sort of exciting adventure, ready to be opened by an eager soul. In fact, their house is so full of books that it's almost like a library, but not quite a library, more like... a bookstore.

The Pollon's owned a beautiful bookstore. Like I said, they owned every book imaginable and happily sold them at Books & More Books bookstore (Very original name, isn't it?). One might ask: why would I want to read a book about a family who own a book store? Because, I answer, the story I have to tell makes a whole book of its own. It is full of secrets, agents, secret agents, and mysterious items with unexplained abilities. Sound exciting?

As was mentioned, this story started out with a semi-ordinary boy by the name of Deklin, and a semi-ordinary girl named Meira. They live in a very normal neighborhood, in a bookstore. They get many visitors who just come to read and drink a hot beverage sold at Books & More Books bookstore. The walls are practically made of bookshelves, and there are so many shelves that it is a wonder how one can squeeze through, let alone find their way back to the entrance. The Pollon’s live upstairs above the bookstore, but you could never tell it was actually a house, for it looks just like the floor below, except for a few pieces of furniture you probably wouldn’t find anywhere but in a house.

Exactly five people live in the Pollon’s house: John Pollon, Helen Pollon, Meira Pollon, and Deklin Pollon. Who is the fifth? Well, they aren’t exactly a person, but sometimes they like to think so. The fifth member is really a ferret. A very annoying ferret, in Deklin’s opinion, and his name is Pazz. Most the time he thinks he is a cat or a dog, but sometimes he thinks he is a human being. Pazz is very confused, and he never acts like his own species. Meira fell in love with him when she saw him for the first time in a pet shop. She was only eight years old at the time, but she begged her father to let her take him home. Pazz only listens to Meira; he is as obedient as a dog, but, unfortunately, only to her.

John is a very strange man. Mr. Pollon mostly keeps to himself, and hardly ever speaks. He spends most of his time in his study, doing anything from writing a book to experimenting with acid.

Helen Pollon is John’s wife and the mother of two children. Her parents were the original owners of Books & More Books.

Meira is very intelligent for a fourteen-year old, the whole family is smart. Meira thinks they have some sort of smart gene. She is the one who would run into a burning building just to say she did. She is great at persuading people to do things, so she gets her way most of the time.

And the last to be introduced is Deklin, quite the strange anti-social kid. He is only 18 months older than his sister (That made him fifteen-and-a-half on her birthday), but sometimes feels like a third parent to Meira. He spends most of his time reading books and watching movies. He is very smart, but doesn’t prefer to show off his talents all the time. He is more serious than his sister, and would be the one to run into a burning building to save someone, not just for the heck of it.

Everyone from the Pollon family enjoy reading, which is convenient because they own a bookstore. Yes, they are one of those weird families that love books.

Once again, in the strange house/bookstore, Deklin woke up to his alarm screaming at him.

It was 6:00 am on a Friday, their last day before spring break, if they were in school, but they homeschool instead. Mrs. Pollon says it gives them more family time. Whatever that means. Oh, but she still makes them get up at the regular time for school. What’s the point in that?

He went about his morning routine before school, groggily because he wasn’t quite awake yet. By the time he got downstairs to eat his breakfast, it is already 6:50. His sister (who had a very similar experience that morning), dad, and Pazz were already eating breakfast at the table; all the humans had their noses stuck in books.

Pazz was perched on the edge of the table licking a bowl of cereal, presumably Deklins, when he walked into the room. Pazz looked up, milk dripping from her furry muzzle, and growled at him.

“Oh, I made you a bowl of cereal for you… oh, never mind,” She said, noticing a ferret licking the cereal. “Silly Pazz.” Meira cooed at him.

I am going to have a terrible day, Deklin thought as her poured his own cereal and milk. Meira thought the exact opposite.

Normally, Deklin is in charge of the counter in the bookshop, while Meira made the drinks. They had a few people come in and order coffees while they browsed the shelves.

The two Pollon children had a very normal day; nothing very interesting happened besides Deklin finished the book he had been working on. It was just a regular day, so far.

Now, one might think that their life was quite boring, because it revolved around books, but it isn’t quite as boring as you might think. Normally they would do their schoolwork after lunch. They got assigned homework every day, so they would shut themselves up in their rooms. Before dinner, however, they had to complete their chores. As if running the bookstore wasn’t enough. For free time they would pick up that book they had been reading earlier. But today was a bit different.

by C.B. Smith Song of the Veil, Book #2 So Gobby and me are total BFFs now. We traveled across the veil into the spirit world even.......

by Daily Florence This is the FIRST short story in a set of short space stories from Orb Central Library. In the far reaches of the Canis......