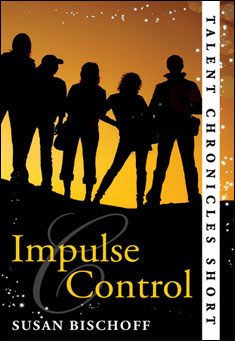 In the world of the Talent Chronicles, kids born with supernatural powers are taken from their families and forced into government research facilities called State Schools. At one such school, a dangerous experiment has killed two young inmates and threatens others. Ethan, a shape-shifter, is reluctantly recruited by his best friend Karen, a telepath, and Elle, the unique Talent he has a crush on, to help thwart the faculty's plans. If they're caught they face Detention, and Detention at a State School has a whole different meaning.

The natives were getting restless.

My fellow inmates were getting restless. The class we were waiting for should have started two minutes ago. Doesn’t seem like much, two minutes, but classes were always on time. Everything was always on time. And any deviation from routine generally meant some kind of trouble.

It was unusual for them to leave us unsupervised. Well, how unsupervised can you be with two cameras mounted in the room? But it was unusual not to have any NIAC—National Institutes for Ability Control—personnel physically there to eyeball us. I’d heard stories from kids who hadn’t been at State School #15 as long as I had, who’d come from normal schools and normal lives on the outside. They said kids acted up at school sometimes, caused trouble just for the sake of causing trouble. Took the consequences just to get attention, or for the thrill of breaking rules and the possibility of escaping with no consequences at all.

It was hard to wrap my brain around that. But then, Detention doesn’t mean the same thing to them. Out there.

My pencil snapped in my hand. Damn.

Ethan, Karen’s voice soothed its way into my brain, you need to relax. It’s probably nothing.

I glanced over to throw her a smile, reassure her that I was fine and not a danger to myself or others…except for the pencil. She was fiddling with her long, black hair, and while her mental voice was calm as ever, she couldn’t hide the apprehension in her grey eyes.

Then those eyes flicked to Elle who, a moment later, turned in her seat and reached across the aisle toward me. I put the two pieces of the pencil in Elle’s hand. She closed her fist around it, opened her hand, and I retrieved my pencil, good as new, from her palm. My fingers brushed her skin and I felt a tingle all the way up my arm. I had to clear my throat to whisper “Thanks,” at her. I doubt she heard me. I barely heard me. She was already facing front, and I was looking at her honey-brown braid again.
You know what you learn when you can read minds? Karen “asked.”

I heaved a heavy mental sigh. Lots of things that aren’t your business, I’d imagine.

Don’t you have anyone else to pick—?

The door opened and three people entered the room.

One was the armed guard who would stand in the corner and look bored the entire time our instructor was in the room. One was the instructor for this class. The class was called Mental Defense, but the instructor had never told us his name. Lots of NIAC personnel didn’t give us their names. We called him Sir. The third was a guy about the same age as Karen and me.

He was on the tall side, pale and really skinny, and his hair was cropped so close to his scalp you could hardly tell what color it was. Brown, I guessed. He walked kind of strangely, one foot dragging a little with each step. The instructor didn’t tell him to take a seat. As the kid stood at the front of the room, it seemed he had a tick that caused his head to tilt to the side a few times a minute.

“This,” the instructor said with a tone of suppressed excitement in his voice that made me kind of nervous, “is Anderson. He’ll be helping us test the telepathic blocking techniques we’ve been working on.” I definitely didn’t like the sound of that. “Anderson has come to us from Delta Facility.”

by Stephanie Van Orman Beth Coldwell should not be in love with Christian Henderson. She's a teenager. He's a grown man. She wished she......