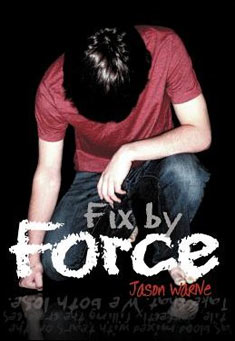 Fix by Force
By Jason Warne

Spencer can't choose to be different than what he is--the son of the town's worst enemy, the weakling who can't stand up for himself, the loser without friends. He can't change the way things are. Or maybe he can. Immediate confidence. Rapid change. Instant hope. These are the things Spencer believes he needs to fix his life, and that is what the steroids promise--a quick fix. But promises can be broken and shortcuts are often treacherous.

My dad gave me a tape recorder for my sixth birthday. I thought it was nice, but my mom said it was garage-sale garbage.

I recorded the ﬁght that ensued.

Later that night while listening to the playback, I accidentally taped over one of my mom’s profanities, with my own, “Oh, shoot!” taking its place.

I thought it was hilarious—like my own little ad-lib exercise—and after I had worn out that segment of tape by replacing my parents’ attacks and accusations with the best stuﬀ  my six-year-old mind could conjure up, I moved on to making up my own skits and pretend celebrity interviews.

My impromptu productions eventually developed into fully scripted stories and songs—things that I would work on non-stop by rewinding and erasing, then re-recording until I was satisﬁ ed with the ﬁnished product.

I could manipulate everything on tape.

But then one day the last of my batteries died, and so did my dad, and I was forced to follow someone else’s script.

And that’s all life was to me—some kind of massive screenplay with a role for everybody. But I hated my part. I even hated my name—Spencer Allen Shane, son of David Spencer Shane, who was still somehow reprising his role as the town’s most hated person years after his death.

Almost every script I knew was basically about good versus evil— heroes against villains. I ﬁgured real-life was probably the same, except my family wasn’t either of those. We didn’t deserve a lead role—not even as villains. We were too insigniﬁcant—too one-dimensional. We were more like the cowards that ran whenever trouble would arise. We were everything the heroes were not.

I was well aware of how I’d been cast, but that doesn’t mean I accepted it. I tried whatever I could think of to rewind, erase, and force a rewrite. I played on the football team, changed my appearance with every trend, pried my way into social situations with the popular kids, and even pretended that I liked whichever pseudo-reality show everyone was talking about. But all that any of my classmates seemed to remember about me was my performance as, “idiot who broke boy’s wrist,” when trying to help the kid with a bone disease into his wheelchair, or, “loser who lost half his hair,” after dyeing it school colors for football homecoming, or my most recent act as, “tool who busted the teacher’s lip,” while I was rescuing her from an aggressive hornet by throwing a few open-handed jabs. No matter what I tried, I was center stage, portraying the character I was meant to.

But now that I had made it to senior year, I knew that I’d have to fade into the background if I even stood a chance of graduating.

So I wasn’t going to try anymore.

No more acting. No more posing. I had failed a third of my classes and missed about two total months of school during the last three years of tirelessly ﬁghting to change the script, and if I continued this year, I’d never earn enough credits to graduate.

So the plan for senior year was invisibility. A full year of hiding. Nothing more than the background actor that nobody notices.

But my plan had too many special clauses for things I didn’t really want to change, and there I was in plain sight, running across the football ﬁ eld as Zack Durbin—my story’s arch-nemesis—motored right toward me with unwavering eyes and stanch determination, in wannabe hero fashion.