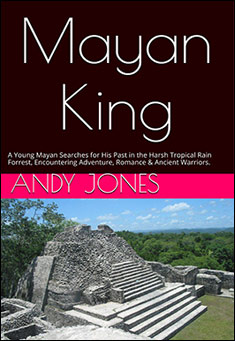 The Mayan King
By Andy Jones and Cenaida Raymundo

A young Mayan searches for his past in the jungles of Belize surviving on the skills passed down to him from his ancestors. On his journey he encounters his ancestors who guide him on a journey into the past.

"It started so innocently when I think back on it. I was reading a book the American missionary had left in the school library. It was so exciting - that young boy who ran away to the forest called Yellowstone Park. All alone in the forest with only the animals as friends, he had to make his own tools to survive; and that large burnt out tree - oh, that did make the nicest home.

"Was I unhappy at home? No.... at least I don't think I was unhappy. But happiness: exactly what does it mean to be happy? What does one do to become happy? Is it a new machete or maybe when the missionaries came into our village and gave us candy bars? Yes, that did make me happy...... But...... what, exactly, was there to be happy about or for that matter to be sad? I was alive; wasn't that enough? Did I have to be happy also? That was a strange word, happy. I would have to think on it some more.......but later. Today I want to get ready to do as that little boy did in Yellowstone Park, except I would not waste my time doing nothing as he did.

"My father told me stories about our people. He said I was the descendant of a Mayan king. He told me that our people had built the great pyramids I see in the picture books. I would not waste my time as that young American boy did. I would go and look for my people. I wanted them to know that their Mayan king was alive." Those were my thoughts; that is what I made up my mind to do. My plan was simple: on the next day when we would be sent to the American school I would not go. Instead, I would go and find my people.

The rest of the evening took up most of the young boy's time as he prepared for the long trip. He had a small camouflage Kuxtal that he put all his essential items into. He put a piece of dried fish. There was more hanging over the smoky fireplace but he knew that his brothers and sisters would be hungry later. He did not want them to be angry with him for being greedy. Taking two fishing hooks and a small roll of fishing line he put them into a small bag his mother had made for him out of a colored cloth his mother had bought from the Cobanaros as they passed by selling their goods. It was called a Kuxstal. He went to the wall and removed his bow and the new arrows he had just finished making. He might need them in case one of the large jaguars came to attack him in the forest. He had heard the men tell stories of the injured jaguars attacking men or children and dragging them off into the forest never to be seen again. They said it was the men from the large towns who shot them with their guns. Sometimes they did not die after being shot and became very dangerous. Next he went for his small machete used for cutting his way through the forests of Belize. He took one of his mother's lighters promising himself he would take good care of it. His mother had only two of them and there was not much money in the house for her to buy back another one and she would need this one in case the other one stopped working. He then took out a small shirt and his extra pair of pants in case the one he was wearing became wet. Stuffing them into a small black plastic grocery bag he tucked them into his bag next to the dried piece of fish.

by C.B. Smith Song of the Veil, Book #2 With her newfound spirit world abilities, Lacy creates a connection so powerful her friend......