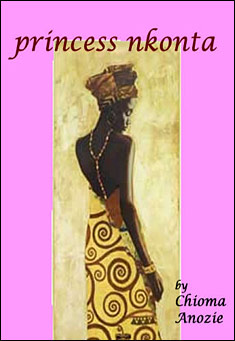 A story of love, the green-eyed monster called jealousy and despicable betrayal shall I spin. It all happened in the kingdom of Okonti, a far away kingdom tucked away in a lush island surrounded by the sparkling waters of the Atlantic Ocean. Now you probably know the ocean isn’t always sparkling but can be a deep forbidding blue or murky brown, but dare I say, the crystal-clear waters surrounding the beach of this lush island glistened and shimmered in sunlight. And what an exotic island it was. Wildlife ranging from lions to playful monkeys, roamed the island. Insects of diverse varieties fluttered, crept or crawled as they went about their various businesses on trees laden with different types of fruits and flowers. Yes the island was beautiful. And so was the great kingdom of Okonti.

Okonti. Sitting majestically on a hilltop, it was a grand kingdom to behold. It was also ruled by a noble warrior, king Isuki and his beautiful wife queen Ivabi. They had two children: Prince Nweze and Princess Nkonta. And my, oh my, were the King and queen ever so proud of their children. Prince Nweze was the best archer and swordsman of his age grade and a very handsome sight for sore eyes indeed. And the princess, I would liken her to a young goddess. She had an oval face with mesmerizing green-brown eyes and a smile that could lighten up a room like the first rays of sunlight did the sky. Her hair was dark brown and as long as a giraffe’s neck. She was slim and had a voluptuous figure too. Despite her exceptional beauty, the princess was a joy to be with, as she was sweet, kind and caring.

In the royal palace also lived the King’s brother Prince Azuchu, a weak-willed man who secretly despised his brother the King because of the King’s strength, gentility, generosity and power. Prince Azuchu had a daughter, Princess Omizi. Omizi was a beauty to behold with her slightly long curly black hair, light brown eyes and olive-brown skin that always glistened. Her character however was a different kettle of fish. Spoilt, arrogant, selfish, vain and wicked barely describe her. You had a greater chance of pleasing an attack-ready cobra than you had of pleasing her royal snootiness, Princess Omizi as her servants knew too well

“Will you clean off that spot on the floor right now!” she once shouted at the poor cleaner boy

“You have not washed my cloths yet? I thought I told you to wash them 5 mins ago. You will be fired” she shouted at the washerwoman a week ago.

“Did you taste this before serving it? It’s a disaster!” she said as she flung the plate of food on the poor cook’s clothes during dinner time while her spineless father watched.

Yes, Omizi was a royal terror and hence nobody in the palace and indeed the whole kingdom liked her. She had no friends and everybody avoided her. Everybody that is but Princess Nkonta, who loved everyone and was inexplicably fond of her nauseating cousin. One day, as Princess Nkonta was sneaking out of the palace, Princess Omizi saw her. “Where do you think you are going?” asked Omizi, her eyes full of suspicion.

“To the beach. I want to pick shells and swim a little” replied Nkonta, an innocent smile breaking across her face.

Omizi pressed her lips into a tight pout and her eyes bulged out of their sockets as she scrutinized Nkonta. She looked like a scary cross between a scarecrow and a foreboding, stern teacher then. “where are your bodyguards and your entourage of maidens?” she queried finally.

“I wanted to go alone this once. I just want to have a normal girl’s life today. Do things normal girls do and not have a bodyguard stop me from going here or there and have maidens falling all over themselves in a bid to do something I could easily do myself. You know what, why not follow me. It will be a lot more fun if we went together” said Nkonta.

Omizi squeezed her face even more as wild thoughts chased each other in her brain. If you guessed that the Omizi was thinking her cousin was lying, you guessed right. In fact Omizi couldn’t understand how a crown princess would want to ‘have a normal girl’s life’ unless she had a secret. Yes! Maybe she was going to see…someone. Someone special. Ahhhh! I will find out and tell everybody her secret. A sinister smile crooked Omizi’s mouth to one side and gave her eyes a look of dark delight, the kind usually seen on a cat’s face before it pounces on an unsuspecting prey.

Fashion Figures: How Missy the Mathlete Made the Cut

by Melissa A. Borza Missy Maker is a middle school girl who loves math and fashion. She sees math in everything she does. She tries to hide......

Behind His Mask: The First Spell Book

by Stephanie Van Orman Evander is a complete mystery to Sarah until she's given a spell book he authored. Pulled into the story, she plays......