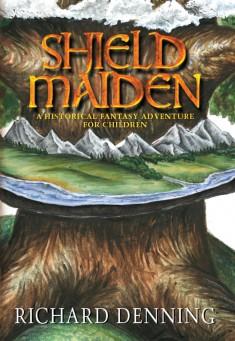 Anna is a 12 year old girl growing up in a Saxon village in 7th century Mercia. Her life changes when she finds a golden horn in the ruins of a Roman Villa. Soon an ugly dwarf, a beautiful sorceress and even her own people are after her.

What powers does the horn have and why does everyone want it?

And why is Anna the only one who can get a note out of it?

this is the first book in The Nine Worlds series in which the historical world of Anglo-Saxon England meets the mysterious world of myths and legends, gods and monsters our ancestors believed in.

What is it?” Hild asked in a loud whisper.

No one answered her. They were all eyeing the dark shape they could see moving in the shadows at the foot of the trees lining the road. As it came closer, the shape seemed to merge with the nearest tree and then ... it disappeared.

Anna crept closer to the tree, staring intently at where the shape had vanished. She could feel her heart pounding in her chest. The other children held back and peered over her shoulder.

There was dead silence all round, which made what happened next seem even more terrifying.

“HELLO!!” screeched a voice from above their heads.

Once more the children jumped and then they looked up, seeking whoever had spoken. Anna was the first to change from being afraid to annoyed as she spotted what, or rather who, was sitting on a large branch of a tree about ten feet from the ground.

“Ellette! Is that you? What in the name of the gods did you do that for?” Anna shouted up at the small mischievous girl.

Nine-year-old Ellette dropped into view hanging upside down from the branch, suspended by her bent knees, her head level with Anna’s. She stuck out her tongue and then made a rude noise at the older girl.

“Cos I can. You all call me little. But it’s not so bad being little you know. I can move around and sneak up on people. So...” she paused and did a small somersault, landing lightly on her sandalled feet, “what are you doing now?”

“We are going to explore the ruins,” Lar said. “But you are too young, little elf, so go home.”

“The ruins. In the dark? They are haunted aren’t they? Great - I’m coming too.” Ellette jigged up and down with excitement.

Ellette grinned at her. It was not a nice grin. It was a grin that meant, ‘Oh yes I am and you might think otherwise, but there is nothing you can do about it!’

“If you don’t let me come I am going back to the village and I will tell all your parents where you are!”

“Oh, come on! Let me come along. It’s not fair always to be left out,” Ellette pleaded, looking up at Anna with puppy-dog eyes.

Anna sighed and glanced around at the faces of the other three. Their expressions suggested that she might as well give in and let the girl join them.

“Oh, very well. But just you do exactly what I tell you to!” she ordered.

Ellette grinned and this time it was a sweet grin that said, ‘Of course I will. I am a good girl.’

“If we are going, let’s go now,” Wilburh said, his gaze lingering on the sun, which was already dipping below the western horizon.

They left the road and headed eastwards towards the ruins, across the flat fields that ran along the north bank of the brook. Beyond the brook, through a small orchard that grew at the top of the village, they could make out the headman’s hut, Iden’s temple and some of the other village buildings. Smoke rising from several of them appeared inviting. The late summer evening was cooling quickly and looking at the dark shape of the caved-in walls and the collapsed roof of the Roman villa, Anna shivered. She felt suddenly cold, as if something was watching them, something ancient and evil.

“It’s just fairy stories and make believe, nothing more,” she muttered to herself, but by the time they reached the ditch that ran around the ruined house she was already regretting her rash decision to come here. Why had she suggested it? To prove a point that she was worthy to be a courageous warrior? That seemed ridiculous now. She almost suggested they abandon the expedition altogether, yet she could not turn back now could she? Not without losing face. She could hardly argue with her father about becoming a warrior and then run away, scared by a few old stones.

Anna walked closer to Wilburh. The quiet boy did not say much, but she knew he spoke to Raedann a lot and was always studying runes and scrolls in Iden’s temple. She had once asked him if he wanted to be a priest one day. “No,” he had replied, “a wizard.” She had giggled at the time, but Wilburh seemed so serious and Raedann did tell stories about wizards and magic so maybe it was not so much nonsense after all. As well as trying to learn spells, the boy had learnt a lot from both Raedann and Iden about history, about the tales of the gods and legends about monsters.

by Meadow Murphy The sequel to Priorities: Rita's story, Rita's priorities are different than Carries when it comes to love! See......