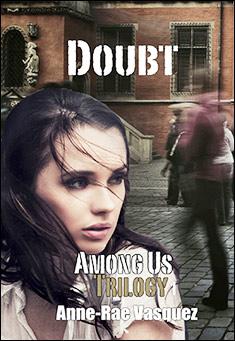 Free book: Doubt, Among Us Trilogy 1
By Anne-Rae Vasquez

Among Us is a book series which delves into the world of the supernatural and how it intersects with the everyday lives of seemingly ordinary young people as catastrophic events on earth lead to the end of times. Among Us weaves the theme of a young man and woman, who while not fully understanding their 'abilities', are drawn together in their desire to find out the truth about the world they live in which is similar to themes used in J.J. Abrams' TV shows Fringe and Lost.

At 21 years old, Harry and Cristal are fresh out of university with their PhD's. Labelled all their lives as being 'weird' and 'geeky', they find true friendships with other outcasts by playing online virtual reality games. Now they face the challenges trying to get used to their 'adult' identities. Harry Doubt, a genius programmer and creator of the popular online game 'Truth Seekers', has a personal mission of his own; to find his mother who went mysteriously missing while volunteering on a peacekeeping mission in Palestine. His gaming friends and followers inadvertently join in helping him find her; believing that they are on missions to find out what has happened to their own missing loved ones. During Harry's missions, Cristal and the team of 'Truth Seekers' stumble upon things that make them doubt the reality of their own lives. As they get closer to the truth, they realize that there are spiritual forces among them both good and evil, but in learning this, they activate a chain of events that start the beginning of the 'end of the world' as they know it.

COINCIDENCE? HARRY'S MOTHER always told him that there were no such things as coincidences. Only fools believed in that garbage.

This may have explained her erratic behaviour when his father, Aaron Doub, a respected quantum physicist, collapsed in front of them. A simple, impromptu after-work dinner party, that his mother Bina was hosting at their home, turned into an unforgettable nightmare.

His father's last words were..."We have the theoretical and experimental capabilities to build a time machine to the future. We have also discovered a scientifically feasible way to go back into the past..."

And suddenly, his father's marble-brown eyes bulged out of their sockets, his mouth opened as if to finish the sentence, and then in slow motion Aaron fell forward, his face landing into the pile of whipped mashed potatoes on his plate. The glaring bald spot, which Aaron meticulously polished and combed over every morning, was all what Harry could see from his end of the table. What would Dad do if he had built his time machine earlier? Would he be here right now? Harry glanced over his shoulder wondering if there was the slightest possibility that an 'Aaron Doub from the past' was standing in the shadows, observing the circus freak show unfolding in front of them.

Thankfully, a young woman, the wife of one of the guests, guided his mother away. Meanwhile, Dr. Saeed was performing mouth-to-mouth resuscitation on Aaron. Harry could see his father's chest rise and fall with each breath of air Dr. Saeed blew into his mouth. Dr. Saeed stopped when he realized Harry was watching.

HIS FATHER WAS PRONOUNCED DEAD an hour after they arrived at the hospital. Harry was walking back from the vending machine. The ER doctor came out of surgery and found his mother and Dr. Saeed in the waiting room. Harry could read from the grim expression on the doctor's face that the news was going to break his mother's heart. "We found a small clot lodged in your husband's brain," the doctor said to his mother. "It caused hemorrhagic damage to the surrounding tissue. I'm sorry Ms. Schwartz...we did all we could."

His mother, Bina, pushed the doctor away, screaming, "No! It's not true!"

The doctor waved to a nearby nurse who went to get help. His mother stepped forward and grabbed the doctor's scrubs with both hands. "He's not dead! What did you do to my Aaron?!" When he didn't respond, she turned wildly towards the other people in the waiting room. "They took my husband! Please help me!"

Harry wasn't surprised with her reaction. She was an Israeli wife and mother who tended to be over dramatic when she expressed her emotions. But something in her eyes made him wonder if she was right.

Three nurses came rushing back, grabbing hold of his mother's arms. "Let me go! Let me go!" She struggled as one of the nurses stabbed a needle into her arm.

"You need to relax, Bina," Dr. Saeed said in a soothing tone. He helped guide his mother down into a chair. "Everything will be just fine."

"Saeed, you need to find Aaron," my mother said, before passing out.

Harry had observed everything from a distance; not fully comprehending what was happening. Funny how a tiny blood clot could bring a man as brilliant as Aaron Doub to his demise.

Harry was only seventeen when his father died; a university senior writing his thesis, 'Mind-reading computers: intelligent assumptions of complex thought processes.'

Besides the fact that his father was an atheist and that his mother pretended to be one too, growing up in Harry's home had been anything but normal. The rare times Aaron was home, Harry might as well have been invisible. When Aaron did acknowledge that Harry was alive, he would rattle on and on about his theories, asking Harry what his opinion was on the matter. If Harry even tried to respond, eight times out of ten, his father would spin around and say, "Where is Saeed? You're not Saeed!" When Aaron did not confuse him with Dr. Saeed, Harry could actually have a profound conversation with his father. But those moments were so infrequent that Harry had to mentally accept the fact that he didn't really have a father.

Now that Aaron was dead, Harry didn't have to pretend anymore. A year later, Harry legally changed his last name to 'Doubt'.