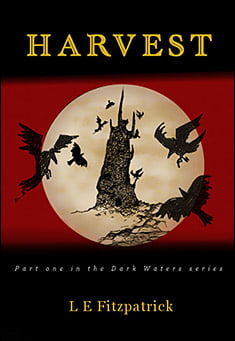 Part One of the Dark Waters Fantasy Series.

Finn is a simple priest living a life of solitude in the Temple until the night his dying father sends for him. Finn learns that, not only does he have a half-sister, but that she is a captive in the Vaults - a prison reserved for the most heinous criminals. Vowing to save her he enlists the services of the scoundrel pirate, Egan Wey. Together they set off to commit treason.

But their adventure only starts with a rescue. Across the ocean a plague is coming, dead men are walking and blood is like gold. Someone is behind this, but can they find out who in time...

This epic fantasy adventure is pulsing with adrenaline and dark humour, with swashbuckling pirates, raging zombies and copious bottles of rum...

Sunlight beamed down through the dense foliage. The shadows heated and slowly the dew began to dry around the body of a man and his wolf. A large rook dropped down to the burnt cinders of a dead fire where the small bones of a pigeon rested. The wolf watched the bird hungrily. He snorted and placed his wet nose against the man's dirty hand. There was no response.

The wolf stretched out his paws and whined to himself. He thought back to the departed pigeon he had shared with his companion and he remembered how much his friend would needlessly waste. His eyes glanced over the man; the snoring oaf had been close to unconscious for over five hours. The day would soon escape them and lunch would be out in the cold again.

There was a noise from beyond the cove they slept in. The wolf raised his ears and nudged his friend again. Reluctantly the wolf got up and licked the dirty bristles on his companion's face. "Stop it," his friend moaned, "Stop!" He pushed the wolf away with his hands, forcing his eyes to remain closed.

The wolf persisted and finally his friend opened his bleary, bloodshot eyes and scowled at the morning. His head pounded. As he moved the world around him spun and he held onto the dirt for support. His bladder was aching, but it was going to have to wait. Egan Wey's hearing focussed on the approaching party up ahead. He examined his shambles of a camp. Grabbing his hat and rucksack of necessities, he clambered down into the roots of a large oak, concealing himself and the wolf as best he could. The marching footsteps grew louder, but Wey and the wolf were well experienced in concealment. They knew to lay still and silent, only taking the slightest breath and listening closely.

"Sir," a small voice called, "The fire's cold. Estimate travellers left at least three hours ago." "And in which direction?" A commanding voice said.

Wey could only see the arms and legs of the uniformed men ahead of him, but he recognised them as the local militia. There were five of them in total, not a patrol and Wey noticed they were missing their swords. He smiled, it was a training party. With a silent sigh he rested back against the bark and waited patiently for them to continue with their nonsense.

"The footsteps are confusing," the trainee paused. "A dog has been here, contaminated the evidence sir."


There was a long silence and finally a third voice spoke up. "We can determine that the traveller was less than half an hour from Langley and six hours from Helmsgate, therefore it is likely he is journeying to Langley. Is probably at Langley already?"

"Yes sir, by the smell of the fellow's sleeping place I would say he was a drinker and given there are no discarded bottles it is likely he will head for a drop of ale to start his day."

Wey listened as they stomped away. When they were out of earshot he began to laugh. He wiped the dust off his hat and jacket, noticing another hole in the leather. Unbuttoning his trousers he took a long piss over his former camp. That would certainly confuse the soldiers on their return.

They were of course mistaken; Wey was neither heading to, nor leaving Langley. Nor was he likely to go anywhere near Helmsgate. What the soldiers had never even considered was that he arrived by boat during the night, camped in the wilderness before heading for the city and he was taking such an erratic route to avoid the authorities. They were right about one thing though, he did need a drink.

The wolf whined and nudged the pigeon carcass. "We'll see what we get on the way."

It was a blazingly hot summer's day, too hot for Wey. He trudged through the wilderness, avoiding all signs of civilisation, in his large leather jacket. After the first mile he was soaked with sweat and regretting his choice to bring rum and not water. Wey rarely learned from that oversight. The jacket, like the rum, was necessity; it held every tool of his trade in concealed pockets and linings. His sister had made it for him six years ago and the time was starting to show in the worn sleeves and collar. Still if he lived long enough he could get her to make him another one.

Thorin kept a steady pace with his friend, keeping alert for foes and, more pertinently, food. He was desperately hungry and longing to be back on the ship. The ground seemed wrong when it wasn't swaying in the sea. After three months on the water Thorin had acclimatised himself so well he hated being in his natural habitat. He waded through the foliage grumpily.

It was a two day trek to the Hermia's heart on foot, providing they got an early start. Wey accepted that it would probably be three days before he reached the city and meet his contact, but if he hurried he might get a day's whoring in to set him in the right frame of mind.

by D.K. Hansen Corruption. Greed. Murder. The road to hell is paved with good intentions, and even the wisest man’s obsession can......

by Candy Ray This is a collection of quirky and surreal short stories and flash fiction. They are set in the future, or in a less com......