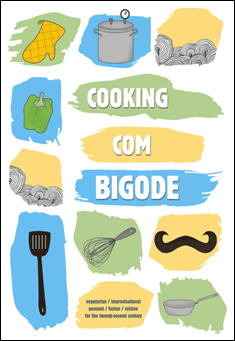 Cooking com bigode [cooking with moustache] is the only twisted moustache of modern recipes and ancient wisdom by ankur shah. The cuisine is vegetarian and international -- indian, mexican, thai, chinese, french, american, south american. the style is personal, relaxed, and holistic. You learn more than mere recipes: you learn patterns.

Cooking com bigode is the vegetarian analog of the proverb: "teach a man to cook a fish and he will eat fish forever". You will learn The (culinary) Jazz. how to improvise. How to see food and cooking and personal relationships from a twenty-second century perspective. the twenty-second century is the century of Love.

Prepare to meet a recipe book unlike any other you’ve ever read. I don’t mean to embark immediately on ﬂights of hyperbole here in this preface to the alchemical stew that awaits, but in this case, I’m simply calling it like it is. Give it a chapter and tell me you’re not a convert.

The Bigode restaurant ﬂourished brieﬂy on the Island of Itaparica off the coast of Salvador in the Brazilian state of Bahia between September 2004 and February 2005. As a real honest-to-God attempt at founding a restaurant in which spontaneity and improvisation ruled the day, the Bigode certainly veered between successful orbit and meteoric collision. Imagine attempting to found a ﬂowering vegetarian establishment in the dense overgrowth of the most militantly carnivorous environs imaginable. (Brings to mind the subtle realm mantra “Location, Location, Location...”) On top of its, say it, out of place vegetarian aspirations, the Bigode also attempted to usher in a new era of idealistic gift-economy relations by posting no prices for its offerings and accepting donations only in exchange for its love-crafted foodstuffs.

You can probably ﬁll in the gory details for yourself. Each weekend, the Bigode opened for business around noon and ordered piping hot vittles straight through to nightfall. Most weekends, the clientele consisted of one or two friends of the proprietors and perhaps the occasional hapless local inquiring about beef stew or the like. As has so often been the case with trailblazing artists and explorers, the true genius of the Bigode did not gain wide recognition during its brief passage through space-time.

With this book, the recipes of the Bigode, nearly lost to history’s compost bin, are preserved for posterity. The dishes you’re about to digest are all, without doubt, mirac-ulous, battle tested and nutritionally complete.

by Obooko Try out these easy recipes for making Scones, bread, rolls, puddings, pastries, cakes and buns. For example: PRESERVE......