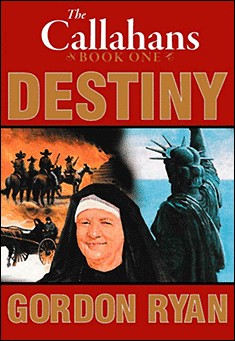 1895, Ireland . . . A young man running away from the law ... A hazardous journey across America . . . A flight to the bustling gold fields of Alaska . . . A young woman bound for a new land with her family . . . An escape through the jungle from a deceptive, polygamous marriage in Old Mexico . . . and a future Destiny for Tom Callahan and Katrina Hansen.

To continue the saga of the Callahans in Book Two, Conflict, and to view all Gordon Ryan's books, please visit the author's Amazon Homepage

It took Tom Callahan nearly a week to walk the hundred miles from Tipperary to Cork. Traveling mostly at night, to avoid any chance meeting with a curious constable, he arrived foot sore and hungry at his destination on the southern tip of Ireland. After a night’s rest, he walked another twenty miles to the port community of Queenstown, south of Cork where ocean liners took their passengers to a world beyond Ireland. Once there, he had saved the expense of renting a room by rigging a makeshift shelter out of the crates of sea freight stacked on the wharf.
The morning after his arrival, the two stack Antioch arrived and moored nearby, and, having decided upon his course of action during his walk through Ireland, Tom booked passage on the steamer. Then for two days, he slept on the docks and kept to himself while waiting for the ship to sail. It was April, 1895, and he was anxious for a variety of reasons to leave Ireland behind him.

The young Irishman spent part of those days amusing himself by watching the comings and goings of a very pretty, blonde young woman. From his hiding place on the wharf, he had been able to observe her without being seen. What he saw intrigued him. She was in the company of an older man and woman, whom Tom took to be her parents, two young girls, probably her sisters, and a young man who Tom guessed was an older brother. They were all apparently going to be passengers on the same vessel as Tom, and he had watched with interest as the young woman and her family busied themselves on and off the ship.

One morning, after a half hour or so of activity on the ship, the family had walked down the gangway and past Tom’s hiding place. They crossed the wharf and went into one of the streets that led to the waterfront in Queenstown. Tom had only been close enough to overhear a snatch of their conversation, but he had enjoyed listening to the young woman’s laughter and watching the graceful way she made her way up and down the gangplank and around the wharf.

Tom was intrigued. They were clearly not Irish or even English. He guessed they were speaking a Scandinavian language. Tom knew the young woman could speak English, though, because he had heard her asking directions of the ship’s First Officer. Whatever language she spoke, it had been pleasant to observe her and entertaining to imagine somehow being able to meet her once they were on board the ship and under way. The idea of sharing the sea voyage with a pretty lass made the prospects of spending nearly two weeks on the water less daunting.

There was no doubt that Tom took a certain pleasure in observing a pretty face and a shapely figure. At nineteen years of age, he had already wooed his share of Irish “Colleens,” but there was something about this young lady that piqued his interest in an unusual way. While he was watching her, the sunlight broke through the overcast Irish skies and the light glinted off her blonde hair. She was tall—taller than most Irish girls—and had the figure and the carriage of a mature young woman, but her girlish laughter and the playful way she behaved with her little sisters made Tom wonder if she might not be younger than she appeared. No matter, he decided. She was certainly pretty enough to merit his attention and might provide some diversion during the voyage.

It did occur to him that meeting her might be something of a problem. It was obvious that her family was wealthy. She and her mother wore full-length, high-necked dresses and tailored, dark wool coats. Tom noticed, too, that the ship’s captain behaved deferentially toward the young woman’s stern-looking, well-dressed father. Considering the steerage rules that had been explained to him when he purchased his ticket, Tom thought it might prove difficult to arrange a meeting. His passage provided only limited access to the upper decks of the ship, but it pleased him to think of making the attempt.

The morning of the day the Antioch was to sail, Tom had a brief encounter that made him even more determined to meet the pretty, blonde woman. There was a good deal of noise and activity on the wharf as the sailors and dock hands made final preparations to embark. Hoping to buy something to eat before the ship got under way, and shivering from the cold, Tom stepped out onto the dock from his dank sleeping place and nearly bumped into her. She was with her brother.