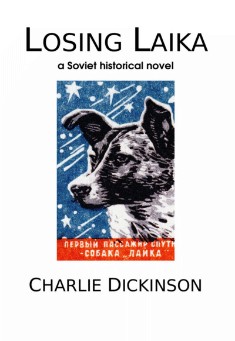 Losing Laika is a Cold War novel. On May 1, 1960, Petró Kravets and colleague Ivan arrive at the crash of the American U-2 spy plane. Experienced optics technicians, they remove the camera. Above all, their work carries on their late fathers' legacy of defending the Motherland.

Petró believes Soviet technology, from Sputnik-1 on, triumphs. And in the Cold War competition with America, the Soviet people hold their own. He hopes a better future awaits his toddler son Andrei. Covering half a century, Losing Laika is an engaging portrayal of a Soviet Everyman and his life and what followed.

THICK, TELLTALE SMOKE climbed on the back of the wind.

A manifold of cords stayed the flare of a white parachute wheeling, jittering on terra firma.

Snick. The belt buckle straps out of the way. Snick. The chest buckle too.

He slipped his right arm out of the harness.

The chute yanked him around, his left shoulder on tether, his eyes transfixed by the clear sky beyond the black smoke and the orange flames a hundred yards away.

He had got out, and they would find him, but what happened?

He pulled the harness away from his left arm, and his body was released and its own again, but he couldn't stand. Sure, the chute worked. No broken bones, but he was waiting for the jelly legs.

The parachute, once freed, shot off, only to hug a pine across the way, its nylon draped like some popped balloon.

He stared at the bunch grass about his flight boots.

He had to figure out what happened.

Lifted off at o-six-two-six hours, Peshawar Air Station, just down the road from the Khyber Pass. First he had to get over the Hindu Kush. Then worry about those targets written out on the clipboard. Ten-hour flight plan, expected touchdown: Bodo, Norway.

Kept the ship on autopilot, its single engine droning along, seventy-thou altitude, slipping over the mountains into the Tadzhik Soviet Socialist Republic. Nothing but clouds. Not the best conditions for taking pictures. Skipped Stalinabad, hidden under the cloud shelf.

Then two hours out of Peshawar, the clouds broke up. He shut off the engine. What he saw affirmed he was on flight plan. He was ready. He'd reached the target at Tyuratam: the famous Cosmodrome where they launched those pesky sputniks. Yep, he let his one-o-four wingspan ship just go into glide--cutting back the vibration for better shots--then flipped switches on the dash, camera door opening and blif, blif, blif--the motorized-drive camera fired away, using up that film magazine: Dozens of feet reserved for his run across the Russkie Empire.

The aviator hugged his head, hands palming his crown.

Then engine restart and on to the next target on the clipboard: Sverdlovsk.

Seventy-thousand feet, thirteen-plus miles up, he was as invulnerable, supposedly, as though he'd been on the far side of the moon. But he didn't buy that, not one-hundred percent. He guessed the Russkies upgraded their radar installations all the time, though the Agency assured him they knew the risks in pressing Islamabad to continue these overflights.

Sure, they had rockets to lift the first sputnik into orbit three years ago--or deliver an H-bomb across the ocean. But tracking and firing a missile to bring down a craft at seventy-thousand feet? That supposedly, according to the Agency, was like a bullet striking another bullet in mid-air and the Russkies could not do that.

So how did it happen?

What got him? A SAM fired from the ground? Or an air-to-air from one of their fighters that max'd at fifty-thou? He shook his head: The possibilities--and they were the only ones--seemed, at best, remote.

It was coming back to him. What it was before he bailed.

Four hours into the flight, he went into a glide to take pictures over Sverdlovsk, its sprawling industry, when blooooom behind the ship. The sky fiery orange. The mighty arm of Thor tipping the right wing of the ship into the dive of Death. Jerked the stick back to the left. But the ship pitched like a stone skipping across water. Rudder probably taken out, altimeter spinning backward.

The seat EJECT didn't work. Somehow he flipped up the canopy, freed himself from the oxygen hose, then levered himself out of the cabin, and to his piss-in-pants relief, the parachute worked. Yep, the parachute ballooned overhead and saved him.

Call it fate, the cabin canopy catching air, the fuselage stalling beside him, then plummeting to the ground. As though something conjoined him to the ship. Only an aviator would understand: The ship wouldn't abandon him, would fall to the ground with him.

He let go his head. Sneezed at the acrid smoke drifting his way. The matte-black pieces: Wing stub, fore-landing wheel, stabilizer tip, engine nacelle, all of it he'd find if he would get up and walk about. Wasn't this the best recon ship in the world scattered over an acre of Russkie taiga? Was anything left to destroy?

He was late for that smörgåsbord dinner at Bodo.

They shot him down.

They would find him.

He simply had to wait.

A few hundred yards away, a charred wing tank spilling fuel smoldered, releasing thick, black smoke. He laughed. Did they need a marker to find him? That fuel would burn for hours.

What had he done? He had nothing to tell the Russkies. He was a dumb flyboy, that was all.

He needed to get up, run, hide. But where to?

Run away from the wreckage? What good would that do? He'd starve. The poison would be quicker, easier.

No, he had to wait for his captors. They'd feed him. Save him. He laughed at how he'd be saved from a wrecked recon mission, nudging some grassy stubble on the ground with his boot.

Took a deep breath. The last time the Agency would get cocky about a mission like this.

Glanced at the chronometer on his wrist, Moscow Time.

They'd find him. Of that he was sure, as sure as he was of the smoking wreckage around him.

He had nothing to tell. Only name, rank, and serial number. Beyond that, he only had to admit those coordinates on the clipboard, what he memorized going through the flight plan.

Reached in his cargo pocket again, fingered the hollowed-out silver dollar with the toxin-coated needle for those hopeless situations. If this was the endgame.

His ship was destroyed, and probably the flames were licking at what film he'd exposed. The only evidence of what he'd done.

The smoking rubble about him saved him the trouble--as he was trained to do--of setting it on fire and waiting for the fuel to explode.

He didn't have to destroy himself too. He only had to say nothing.

Glanced again at his chronometer: 11:50 Moscow Time. Before sundown, he'd be past due at Bodo. And soon even Ike would know he'd gone missing.

Took the dollar out, then flung the coin sideways to his left, as far as he could across the taiga meadow. He hung his head down, clutched his knees, and sat still.

Maybe he would never be trusted to fly a mission like this again. It didn't matter.

Away from the drifting smoke of the plane crash and the dazed aviator, a Mil Mi-4 helicopter lifted off the Ministry of Military Aeronautics installation at Sverdlovsk, rose two hundred meters above the tarmac, then dipped and headed toward the crash. The four men on-board expected a twenty-minute flight.

Commander Solovev piloted the helicopter, and beside him sat Dr. Kosior, if medical aid was needed. The reason for the flight, however, was the two military police, Kalinin and Puzanov, in the rear seat. They were charged with taking the downed pilot into custody, where he would quickly be turned over to State Security agents and transported to Moscow. The Union of Soviet Socialist Republics took aerial spying over its territory seriously and would apply strict sanctions under its military justice code when it found out why an alien aircraft kept invading sovereign airspace, after the first radar spotting near the Aral Sea.

Opaquely black smoke climbed its own column in the distance. The same heading where Commander Solovev knew a parachute sighting had been confirmed.

by John C. Nash Baby-boomers were nearing adulthood. Survivors of World War II and Korea were discovering middle age. The US military-in......