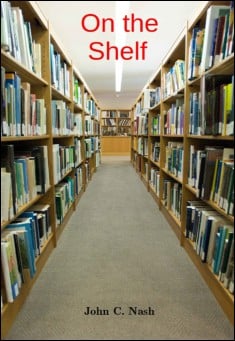 On the Shelf
By John C. Nash

Mother's funeral took place an hour after the deposit of several millions I got from selling the business that had been my primary preoccupation for a quarter century. And a few months earlier, my personal life had undergone a sea change. So here I was, middle-aged and adrift, comfortable financially but at a loose end. That is, except for a strange letter Mother left to be given to me upon her death.

Some doors had closed with a loud bang, but others were now ajar.

In October 2005 my mother died the same week I sold my software business for a tidy sum of cash. Nothing like the $1.65 billion Google paid for YouTube a year later. But the buyers – a Chicago outfit that really just wanted to close me down so they’d not have competition – offered me $ 30 million in their stock or half that in cash.

I took the cash, which was deposited to my account an hour before the funeral for my mother.

That was Tuesday, October 11. One day after Canadian Thanksgiving, which had delayed the settlement of the business transaction and had meant my mother was, as they say, "resting" at the funeral home an extra day.

As you might expect, it was an emotional time for me. I’d put a quarter-century into my business, half my life, and before I founded it as a 1-man consultancy when I was 25 years old, I’d only had one real job. Letting it go, along with three dozen employees, had my insides churning a bit. The buyers were a bit surprised I took the cash. I was not confident that their shares would retain their valuation, or that I could sell them easily, though to date they have not declined as fast as I thought they might. There was additionally a condition that I couldn’t start or participate in any business in a similar market area for 5 years. Fortunately, I didn’t want to. I figured at my half-century mark it would be a good idea to try my hand at something different.

You might also expect that my mother’s passing was a further cause of upset, but she and I had talked a lot about life and death, among other things. I was her only child, born when she was 45 years old and my Dad was 63. He died when I was 8, and while I remember a cheerful, kindly man with whom I shared a number of activities and outings, he was not someone I could say I really knew. On the other hand, I shared a lively intellectual and social life with my mother, who somehow included me in her day-to-day life. In her final year, we were both aware that her heart was failing, and that its beat would stop in a very finite number of days, but she insisted that we appreciate the life she had lived and not diminish the days she had left by bemoaning their limited number. So I was saddened by her passing, but I wouldn’t say I was upset.

Mother was to be cremated, and we didn’t have an open casket. She wasn’t particularly religious, but somehow had come to friendship with a local Unitarian minister who conducted a simple and dignified ceremony attended by two mini-bus loads from her retirement home. The funeral home provided a room for a modest reception after the service where I was the solitary member of a receiving line. The last person to express their condolences was a thirty-something woman who informed me that she was one of the administrators of the retirement home. She handed me a quite fat but business-sized envelope marked “To be given to my son, Joseph Cotton, upon my death”.

I thanked the lady – it embarrasses me, as someone in a business that relies on contacts, that I failed to register her name – and put the envelope in my jacket pocket. As soon as I reasonably could, I let the funeral director know I was leaving and would arrange to pick up my mother’s ashes and any documents when they were ready.

I went home to my condo. 3:30 p.m. on a quite ordinary, rainy October day in Ottawa. My condo was a modest two storey plus basement end-unit that had been advertised as an “executive town home”. That is, it was 1400 square feet plus a single garage in a grouping of 40 in a western suburb. Despite my role as the CEO of a reasonably successful hi-tech firm, I drove a 5-year old Subaru.

You might wonder where I had hidden my family. Well, in university I’d had a wonderful girlfriend. We spent six weeks one summer travelling through Europe. After graduation, she went to UBC for graduate work in marine biology while I did a Masters’ in computer science at Waterloo. And the day after my thesis defense I got a Dear Joe letter.

by Kurtis Sunday Paris, during the bloodiest days of the Revolution: a book entitled An Atheists’ Bible is discovered by the author......

by Kurtis Sunday During the Spanish Civil War a German anarchist and historian serving with the International Brigade discovered an accou......