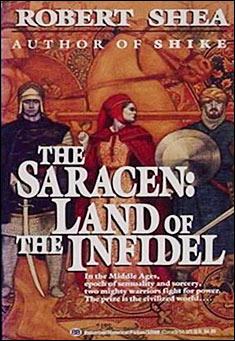 The Saracen: Land of the Infidel is the first volume in a two-part historical novel, set in the 13th century during the crusades. The story portrays an English-born man named David, who is captured as a very young child and sold into slavery to Baibars, a Mamluk officer. He becomes a devout believer in Islam and takes the Arabic form of his name and the surname of a convert, Daoud ibn Abdullah. He develops into a gifted warrior and assassin. He is sent to the Papal Court in Orvieto in the 13th century as a spy, in order to foil an alliance between the Christian West and the Mongolian descendants of Genghis Khan to exterminate the Muslim faith and capture the Holy Land.

Daoud was also trained by the Hashishyya, a heretical Islamic order. One of the many spellings of their name, Hashshashin, is where we derive the modern word "assassin". The author spends considerable time discussing their techniques and philosophy, and it is a major theme of the book.

In the mist-filled plains around Lucera, ***** crowed.

Daoud ibn Abdallah pushed himself slowly to his feet. After days and nights of walking, his legs ached abominably.

Tired as he was, he looked around carefully, studying the other travelers who rested near him on the road, peering at the city wall a hundred paces away with its shut gate of iron-studded oak. In his stomach he felt the hollow ball of dread that had not left him since he landed in Italy.

I am alone in the land of the infidel.

Dawn gave a pink tint to the pale yellow stones of the wall, about twice the height of a man. Above it in the distance, covering the summit of the central hill, rose the citadel of Lucera, surrounded by its own huge wall set with more than a dozen many-sided towers.

Daoud’s feet throbbed in his knee-high boots. For three days he had walked along the carter’s track from the port of Manfredonia on the Adriatic coast into the hills around Lucera. Yesterday at daybreak he had been able to see, from a great distance, the outline of the fortress emerging from the center of a rolling plain. It had taken him another day and a night to reach its gate.

Around Daoud now were dozens of people who had gathered at the gate during the night, mostly merchants with packs on their backs. A few farmers, hitched to carts loaded with melons, peaches, and oranges, had dragged their burden over the plain. The more prosperous had donkeys to pull the wagons.

One man with a long stick drove six small sheep. And a cart near Daoud was piled high with wooden cages full of squawking chickens.

Walking in his direction was a tiny dwarf of a man who appeared permanently doubled over, as if his back had been broken. It seemed to Daoud that if the man were not holding his arms out from his sides for balance, his knuckles would almost have brushed the ground. His little cart was piled with broken tree limbs, firewood to sell in the city.

The dwarf lifted his head and grinned at Daoud through a bushy black mustache. Daoud smiled back, thinking, God be kind to you, my friend.

From within the city issued a familiar cry, in Arabic, that tore at Daoud’s heart: “Come to prayer. Come to security. God is most great.” It was the adhan, the cry of the muezzins in the minarets of Lucera’s mosques. For, though he was in a Christian land, Lucera was a city mostly populated by Muslims.

Daoud wanted to fall to his knees, but he was pretending to be a Christian, and could only stand and ignore the call to prayer as the Christians around him did. He said the words of the salat, the required prayer, in his mind.

The people near Daoud spoke to one another sleepily, softly, in the tongue of southern Italy. Someone laughed. Someone sang a snatch of song. When the Muslim prayer ended, they expectantly looked up at the town wall.

Daoud saw two soldiers standing in the tower to the left of the gate. They were accoutred in the Muslim manner, with turbans wrapped around their helmets and scimitars at their belts. One lifted a long brass trumpet to his lips and blew a series of notes that sent shivers along Daoud’s spine. With a few changes it could have been the call that had awakened him every morning in the Mameluke barracks on Raudha Island in the Nile.

Using ropes, the other soldier hoisted onto a tall pole a yellow banner bearing a black bird with spread wings and claws, and two heads facing in opposite directions. The double-headed eagle of King Manfred’s family, the Hohenstaufen.

With a great squealing of cables and squeaking of hinges, the tall wooden door swung wide.

Daoud reached down and picked up the leather pack that had lain between his feet. Leaning forward, he pushed his arms through the shoulder straps.

He wore draped over his pack a long countryman’s cloak of cheap brown wool. His tunic and hose were of lightweight undyed cotton. Only his high boots were expensive. He needed good ones for the long walk from the coast to Lucera. A sword swung at his belt, short and unadorned, the sort any man of small means might wear. He had chosen it in El Kahira out of a stack of swords taken from Christian men-at-arms during the last crusade.

He drew the hood of his cloak over his head. Later his blond hair and gray eyes would guarantee that no one would suspect what he was. But here in southern Italy, where most ordinary people were dark complexioned, his appearance might draw unwanted attention.

Even though the sun had just risen, he felt the heat on his back. But it was not the dry heat of Egypt that he had known most of his life. A heaviness in the air called forth a dampness from within his flesh. His tunic clung to him.