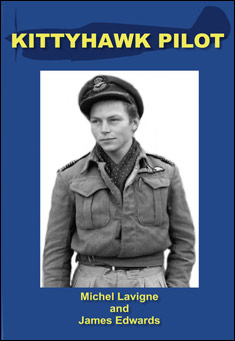 This is the true story of "Stocky" Edwards, Canada's top living fighter pilot. The story begins in Battleford, Saskatchewan where Stocky grew up. During his childhood, shooting partridge, and working hard, Stocky learned the lessons that would serve him well during the Desert War. This is the incredible story of a young Canadian who goes to war and becomes a superior pilot and leader of men.

The events leading up to the Second World War were far removed from the small prairie town of Battleford. Much of the world had declined, until the final moment, to heed the warning signs of impending conflict. Circumstances had decreed that a young Saskatchewan boy would be well prepared for the role he was to play.

When war broke out in 1939, Jim Edwards was in grade twelve and determined to enlist. It was not surprising that he wanted to join the Air Force. It was an exciting thought, but more than that, Jim's formative years had developed in him the initiative and skills which would compel him to seek the role for which he would be most suited. By the time Jim Edwards entered young adulthood, he had become a responsible and diligent worker, a bright student, a healthy, competitive athlete, and a skilled marksman. These characteristics were ingrained at an early age and nurtured throughout his childhood.

The days had always started early for young Jimmy and his brother Bernie. Every morning, by a quarter to six sharp, they were at the old Canadian National Railway station where they clambered aboard Bob Speers' milk wagon, ready for another round of deliveries. They and the other youngsters who met there each morning would put their system to work; as the wagon made its slow trek, allowing just enough time for the boys to make each delivery before it moved on, they ran from wagon to door and back again, with one member of the team remaining on the wagon to load the crates.

On winter mornings, when the slower horse-drawn sleigh was used, the boys could count on over two hours per run in temperatures that could drop to forty degrees below zero Fahrenheit. In the summer, when Mr. Speers brought the truck to the station each morning, the job usually took less time. Averaging a two hour run each morning through the seasons, the boys were rewarded for their efforts when they each received two quarts of milk. Even though milk only cost ten cents a quart in those days, it went a long way to help supplement the family food supply. Besides, the early morning run was healthy and invigorating; it kept them fit. It was one of Jimmy's first jobs. He was nine years old.

But it was not all work and no play for young Jimmy. As a boy, he joined in games of cops and robbers and hauled his sled up the town hill in winter to come careening down the snow-covered slope. There were plenty of outdoor activities with which a young boy could keep himself busy. When berries and mushrooms were in season around Battleford, he picked dozens of gallons and took them home for the eating.

At home, he had chores to do. The Edwards' household was heated by a wood-burning stove. Thirty-foot poplar poles were delivered to the house and Jim and his brother bucked them up and carried the wood into the house. As if he had little else to do, the youngster managed to attend Boy Scout meetings and mass on Sundays. On weekends, he checked the trapline he ran along the Battle River.
Jim showed an interest in hunting at an early age. He had learned to shoot small birds and animals with a slingshot and bow and arrows. When he was only nine years old, he began using a .22 rifle and by the time he was twelve, his father judged both Jim and Bernie capable of handling a 12-guage pumpgun. The boys hunted Hungarian partridges, pheasants, and prairie chickens on the wing. From upland game they advanced to waterfowl, ducks and geese. Situated between the junction of the Battle and North Saskatchewan Rivers, the area around Battleford lent itself to first-rate hunting. By the time he was eighteen, young Jim was known to be a good wing shot. His hunting experience as a boy would prove useful later.

by James R. Cowles The full back-story of my fascination with the US Constitution, its historical origin and ideological provenance via the......

by Joseph L. Locke and Ben Wright (editors) The Second Volume of this Collaboratively Built American History Textbook. (Also available Volume I: To 1877) This is......