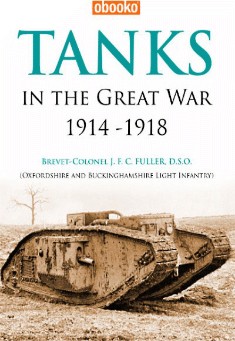 I first set eyes on a tank towards the end of August 1916. At this time I little thought that I should eventually be honoured by becoming the Chief General Staff Officer of the Tank Corps, for a period extending from December 1916 to August 1918. The time spent during this long connection with the greatest military invention of the Great War, it is hoped, has not been altogether wasted, and the story here set forth represents my appreciation of having been selected to fill so intensely interesting an appointment.

Besides having witnessed and partaken in many of the events related, those who have assisted me in this book have all been either closely connected with the Tank Corps or in the Corps itself, they one and all were partakers in either the creation of the Corps or in the many actions in which it fought.

Excerpt from CHAPTER IV, THE MARK I TANK AND ITS TACTICS

The Mark I tank was the direct produce of the experimental machine which was officially tested on February 2, 1916. It may be defined as “a mechanically-propelled cross-country armoured battery,” the maximum thickness of its armour being 12 mm.

The main tactical characteristics of all tanks may be placed under the headings of—mobility, security, and offensive power, and as regards the Mark I machine the following is a general description of these characteristics:

(i) Mobility.—The Mark I tank could move over flat ground at 100 to 120 yards a minute, over ground intersected by trenches at 30 to 40 yards a minute, and at night time at 15 yards a minute. It could cross all forms of wire entanglements, crushing down two paths through them which were passable by two single files of infantry. It could span a trench 11 ft. 6 in. wide, surmount an obstacle 5 ft. high, and climb a slope of 1 over 2.

(ii) Security.—The Mark I tank was proof against ordinary bullets, shrapnel, and most shell-splinters.

The chief limitations of the tank are connected with its mobility. For the Mark I type these limitations were as follows:

Its circuit in action was about 12 miles, and the fighting endurance of its crew 8 to 12 hours. It was not suited for traversing swamps, thick woods, streams with marshy banks, or deep sunken roads. It could be expected to cross shelled dry ground at a slow pace, but should this ground become sodden with rain it would find difficulty in doing so, and might frequently become ditched.

A tactical paper on the employment of this machine was put forward officially in February 1916 by Colonel Swinton, entitled “Notes on the Employment of ‘Tanks.’” This document is of special interest as it is the first tactical note published on the use of tanks. The following are certain extracts taken from it:

“The use made by the Germans of machine-guns and wire entanglements—a combination which has such power to check the advance of infantry—has in reply brought about the evolution of the ‘caterpillar bullet-proof climbing motor, or tank,’ a machine designed for the express purpose of assisting attacking infantry by crossing the defences, breaking through the obstacles, and of disposing of the machine-guns. It is primarily a machine-gun destroyer, which can be employed as an auxiliary to an infantry assault....”

“Hostile machine-guns which it is impossible to crush (i.e. by running over them) will be attacked by gunfire. It is specially for the purpose of dealing with these weapons ensconced in houses, cellars, amongst ruins, in haystacks, or in other concealed positions behind the enemy’s front line, where they may not be knocked out by our artillery, and whence they can stop our infantry advances, that the tanks carry guns. Being covered with bullet-proof protection, and therefore to a great extent immune from the hostile machine-guns, they can approach sufficiently close to locate the latter, and pour in shell at point-blank range....”

“As ... it is proposed that the tanks should accompany the infantry,” they should carry forward the following signalling apparatus, “small wireless sets ... an apparatus for laying a field telephone cable either on the surface of the ground or possibly buried 12 in. deep ...” also visual signalling apparatus and smoke rockets.

“The tanks will be destroyed by a direct hit of any type of howitzer shell. They will probably be put out of action by all except the most glancing hits of high-explosive shell fired by field-guns.... They may also be blown up by mines or land-mines....”

“Since the chance of success of an attack by tanks lies almost entirely in its novelty, and in the element of surprise, it is obvious that no repetition of it will have the same opportunity of succeeding as the first unexpected effort. It follows, therefore, that these machines should not be used in driblets (for instance, as they may be produced), but that the fact of their existence should be kept as secret as possible until the whole are ready to be launched, together with the infantry assault, in one great combined operation....”

“The sector of front where the machines can best operate should be carefully chosen to comply with their limitations, i.e. their inability to cross canals, rivers, deep railway cuttings with steep sides, woods and orchards....”

Tanks should remain at the position of assembly “sufficiently long for the crews to reconnoitre, ease and mark out the routes up to the points where they will actually cross the front defences, and to learn all that can be discovered of the German front-line trenches, and the defence zone behind it over which they have to advance....”

“The tanks, it is thought, should move forward together, say, by rocket signal, sweeping the enemy’s first-line parapet with machine-gun fire; and after they have proceeded some three-quarters of the way across ‘No Man’s Land,’ and have succeeded in attracting to themselves the fire of the German infantry and machine-guns in the front line, the assaulting infantry should charge forward so as to reach the German defences soon after the tanks have climbed the parapet and begun to enfilade the trenches....”

“... unless expectations are falsified, if the machines accompany the assaulting infantry, moving with it, or just ahead of it ... both will be across the enemy’s front line and on their way to the second before the curtain of fire descends, and the latter will be behind them. It is hoped similarly that, owing to the prevention of the usual checks to the advance, which the action of the tanks will ensure, by the time the German gunners shorten the range in order to provide a second curtain in front of their second line, our assault will have already swept beyond the line.

“The above anticipations are admittedly sanguine; but if the tanks are employed and are successful, it is thought that they will enable the assault to maintain most of its starting momentum, and break through the German position quickly,” a condition which up to the present it has not been possible to attain, “even after immense sacrifice of life.”... “Not only, however, does it seem that the tanks will confer the power to force successive comparatively unbattered defensive lines, but ... the more speedy and uninterrupted their advance, the greater the chance of their surviving sufficiently long to do this. It is possible, therefore, that an effort to break right through the enemy’s defensive zone in one day may now be contemplated as a feasible proposition.... This being the case, it appears that when the tanks are used the contingency of such an extended bound forward being made should be most carefully legislated for in the way of preparation to send forward reinforcements, guns, ammunition, and supplies....”

“The necessity for the co-ordination of all arms to work together in the offensive generally requires no remarks here, but the desirability of the specially careful consideration of the subject in the case of an operation by tanks, requires some emphasis, since the orchestration of the attack will be complicated by the introduction of a new instrument and one which somewhat alters the chain of interdependence of all. A recapitulation of this chain will make the matter clear. The tanks cannot win battles by themselves. They are purely auxiliary to the infantry, and are intended to sweep away the obstructions which have hitherto stopped the advance of our infantry beyond the German first line, and cannot with certainty be disposed of by shell fire. It follows, therefore, that the progress of the attack, which depends on the advance of the infantry, depends on the activity and preservation in action of the tanks.

“The weapons by which the tanks are most likely to be put out of action are the enemy guns. The only means by which we can at the earlier stages of an attack reduce the activity of the enemy’s guns, are by our own artillery fire or by dropping bombs on them from the air.

“It follows, therefore, that in order to help our infantry in any operation in which tanks take part ... the principal object of our guns should not be to endeavour to damage the German machine-guns, earthworks, and wire, behind the enemy’s first line, a task they cannot with certainty carry out, and which the tanks are specially designed to perform. It should be to endeavour to help the infantry by helping the tanks, i.e. by concentrating as heavy a counter-fire as possible on the enemy’s main artillery position, and on any field or other light guns whose situation behind the first line is known....”

100 People Who Changed History and the World

by Manjunath.R This book takes readers back and forth through achievements of 100 of the world's most inspirational and influential......

Precarious lives: Black Seminoles and other freedom seekers in Florida before the US civil war

by A. A. Morgan For a century and a half during the American slavery era, some of the men, women, and children who fled captivity found......