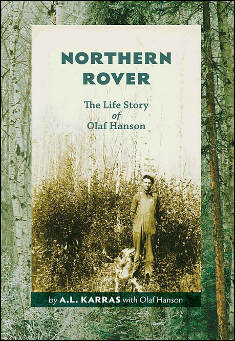 Northern Rover: The Life Story of Olaf Hanson
By A. L. Karras

From 1919 to 1970, Olaf Hanson was a trapper, fur trader, prospector, game guardian, fisherman, and road blasting expert in northeastern Saskatchewan. He told his life story to popular Saskatchewan author A. L. Karras, who wrote this historical memoir in the 1980s.

In an uncompromising, straightforward style, Karras and Hanson reveal the geography, wildlife, natural history of the region as well as the business and social interactions between people. Their book offers a look at the vanished subsistence and commercial economy of the boreal forest, wound around a fascinating personal story of courage and physical stamina.

It was October of the year 1919 when I ﬁrst went into northern Saskatchewan. While working in the harvest ﬁelds of the southern part of the province, I had made it known that I wanted to get as far away from civilization as possible to hunt and trap for a living. I had spent a few years on my homestead near Maple Creek and I had been in British Columbia, yet I had never found anything to my liking in the way of establishing a permanent occupation.

The news of my intentions spread among the harvest hands. Co-workers Ernest Stender of Kisbey, Saskatchewan and Harry Hughes, late of the state of Oregon, were as anxious to see the North as I was. We entered into a partnership.

We bought an outﬁt of traps, guns, skis, tent, folding camp stove with collapsible stovepipes, and all the other tools and supplies we would need to spend a winter in the bush, then shipped it all by rail to Prince Albert. Then we purchased one-way railroad tickets to this jumping-oﬀ place for the land of our dreams, a land of opportunity, adventure, and peace.

When our little group arrived in Prince Albert, we walked into a building called Lacroix Hardware on River Street. I was elected to enquire where we might ﬁnd a Game Commissioner and was directed to see Mr. Andy Holmes, at that time Chief Game Commissioner for the Province of Saskatchewan. We found him at his residence, and thus began my long friendship with one of the ﬁnest gentlemen I have ever met.

That day was October 3, less than one month before the trapping season was to open officially. Holmes suggested that we locate ourselves at Candle Lake without delay and work our way north from there. We had been told that trappers must purchase trapping licenses. Holmes said that, starting with the current trapping season, trappers were indeed required to buy a license, which cost twenty-ﬁve cents each. He pointed out one advantage to the holder: if he failed to show up in the spring, then the authorities would have some idea where to look for him. That day we bought the first trapping licenses to be issued in Saskatchewan. Harry was issued No. 1; I had No. 2; and Ernest had No. 3, as that was the order in which we sat on the bench when we faced Holmes. I have no idea how many licenses were issued that year, but it gives me a good feeling to know that we were first in line. By the next year a trapper could be taken to court if he failed to be licensed, and the cost of the document had risen to two dollars.

Now it was urgent that we find someone to freight our supplies to Candle Lake. Back again at the helpful hardware store, we were told to look up a Mr. Van Ryswick, who was the proprietor of a confectionery on Eighty Street and First Avenue East. We were in luck, as Van Ryswick was expecting a friend from Henribourg who did commercial hauling with horses and would freight our supplies over the bush trail to Candle Lake. On October 5, this man, whose name I have forgotten, arrived with a wagon and a team of horses, and on the following day we left with him for his farm.

The next day the weather was sunny and mild—a grand autumn day. Our host spent that day preparing for our trip and invited us to go hunting to pass the time. It was also my birthday, and we would go hunting in order to celebrate it. We spent the morning in a fruitless search, but by mid-afternoon I had bagged my first deer in the North, a nice buck with a fine set of antlers and a grand birthday gift for a greenhorn big game hunter. The farmer got half of the meat, while we would take the remainder with us on our trip to Candle Lake.

As we slept that night, our beautiful weather left us. The next morning visibility was down to less than one hundred yards; it was snowing heavily and deep snow covered the ground, creating a great silence all around. We were unable to set out on our journey until October 10, the day it stopped snowing.

Arthur L. Karras was the author of the Saskatchewan classic books North to Cree Lake: The Rugged Lives of the Trappers Who Leave Civilization Behind (1970) and Face the North Wind (1975). This manuscript came to light after his passing in 1999. 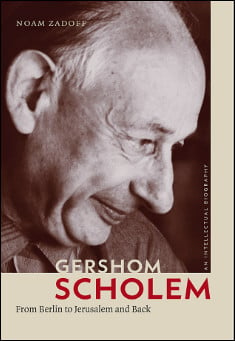 Gershom Scholem: From Berlin to Jerusalem and Back

by Noam Zadoff German-born Gerhard (Gershom) Scholem (1897–1982), the preeminent scholar of Jewish mysticism, delved into the his......