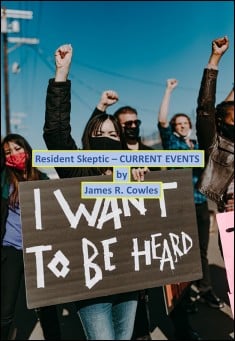 As Skeptic-In-Residence, my charter said that I was to adopt a "contra" or skeptical attitude to accounts of current events and recent history. I did this with regard to, e.g., former President Trump's "many fine people" remark about the anti-Semitic / fascist marchers on the University of Virginia's Charlottesville campus, the moral ambiguity of people engaging in dangerous activities from whose consequences others would have to rescue them at peril to their (the rescuers') life and limb, the traditional wisdom about fitness and fatness, and the too-facile rhetoric surrounding the abortion controversy via mythical locutions like "the moment of conception," etc. If there is one pattern to my skepticism in these columns, it is the tendency of rhetoric to overrule substance, and the consequent virtues of a skeptical attitude toward both.

I am learning – the hard way – to get knee-jerkingly suspicious every time someone mentions the phrase “moral equivalency” – and certainly when anyone attempts to employ moral equivalency in arguments. I suppose there are occasions when that term, and that rhetorical tactic, are justified, but I have not encountered any examples lately, least of all examples in real life. In fact, I would even make bold to say that at least 90% of the time – and I mean for that number to be interpreted quite literally – entities and acts that are said to be “morally equivalent” are anything but.  Most of the time “morally equivalency” could be more accurately rephrased as “moral imbecility”.  Two examples leap to mine immediately.

Somewhat more subtle – comparison with Trump sets the “subtlety bar” pretty low! – is the kind of rhetoric one encounters from time to time, presumably among people who have no business not knowing better, but who pride themselves on bending over backward to be disinterestedly fair-minded, alleging that the Republican and Democratic Parties are both equally corrupt because “Aw, gee-gawrsh” – here the speaker removes his index finger from his nostril and examines the results of such prospecting – “they both do it!” Not exactly a “booger” of an argument, even when illustrated with slick imagery like that immediately below on the left. I will certainly not break a lance arguing that the Democratic Party is the repository of all political wisdom and propriety. But – as a matter of historical fact, assuming anyone studies history anymore, which assumption is far from limpidly clear – they both don’t do it to anything like the same extent, and least of all do “they both do it” with the kind of stiff-middle-finger brazenness so evident during the Obama years. Herewith some questions:

o Which Party adamantly and with cyborg-like reliability continues to oppose even modest efforts to regulate firearms commerce – like true universal background checks – advocated by roughly 90% of Americans, even in the face of “slaughters of the Innocents” like the Newtown, CT, shootings? If the First Amendment were interpreted this anarchically, falsely yelling “Fire!” in a crowded theater would be protected speech.

o Which Party nominated a candidate who – ignoring precedents like NY Times v. Sullivan, about which one may be assured he knows less than nothing – advocates “opening up” libel laws, the better to enable aggrieved neo-fascists to sue dissident news media into financial submission. And by the way, does that candidate even know that there are no national- / Federal-level libel laws?

o Which Party nominated a candidate who, running roughshod over the “establishment” and “free exercise” clauses of the First Amendment – to say nothing of the “due process” clause of the Fifth and Fourteenth, and the “equal protection” clause of the latter – would institute registration of Muslims, even native-American-born Muslims, and the warrantless surveillance of their mosques?

o Which Party’s candidate advocated oil-drilling and mining on national-monument land, and signed an executive order to that effect once in office? At considerable risk of giving him ideas, I will say that I am getting more than a little hinky about the security of the Gettysburg Battlefield, Arlington Cemetery, and the Tomb of the Unknowns.

o Which Party’s candidate taps into an evidently inexhaustible reservoir of braggadocio about how the American military is always “locked and loaded” while cutting food-stamp support for their families? I have worked closely in the past with members of the Services, and, to their eternal credit, they are indeed “locked and loaded”. Now we can add a third adjective:  “hungry”.

o Which Party confirmed as Secretary of Education a woman, Betsy DeVos, whose avowed intent is to privatize education with the ostensible goal of improving it, but whose real agenda is to enable schools thus privatized to thereby circumvent the “establishment” clause of the First Amendment so as to re-introduce prayer and Bible-reading into schools, and to substitute creationism and intelligent design for legitimate biology in school science curricula?

o Which Party’s candidate views with such alarm the decline of coal-mining jobs in the US, but who is evidently apathetic about the combined number of dancer / choreographer and podiatrists’ jobs, which equal roughly 50% of coal mining employment? Why is there no proportional hysteria about the job crises in professional dancers / choreographers and (the closely related field of) podiatry? Are dancers and podiatrists not equally deserving of gainful employment? Are they, unlike coal miners, to be relegated to public assistance, and thereby summarily consigned to Speaker Ryan’s Hammock of Laziness? Which leaves us with a burning question:  without podiatrists, who will save those dancers' soles.  Finally, I was wrong in my initial assessment. In the process of writing this column, I have reappraised my cynicism about the strategy of “moral equivalence” in ethical discourse. In fact, I have discovered one context in which the attitudes and rhetoric of “moral equivalence” are fully justified. Compare the current Republican Congress and Republican Executive Branch ... oops! ... sorry! ... I'm being redundant! ... with a similar combination of the National Socialist Party of the 1940s and National Lampoon’s Animal House. Or think of it as “Horst Wessel Meets The Three Stooges”.

The universal all-purpose answer to all the above "Which Party ... " questions: It damn well ain't the Democrats.

Now that's what I call true "moral equivalence", for which I read "moral imbecility":  the resemblance is positively uncanny!

Ladies and Gentlemen, the Mayor of the United States

by Hector Luis Bonilla This year’s general elections will be great! Not only a new president, but also and for the first time in the hist......

We The People - The Constitution of the United States (with Amendments)

by James Madison and Others Ebook edition of The Constitution of the United States of America. Including the 27 Amendments. The supreme law of th......