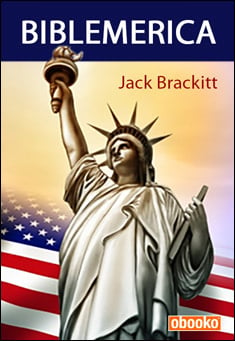 Same messages, new words. This is a lighthearted, contemporary adaptation of the books in the King James Bible. Jack Brackitt substitutes people, places and situations with modern-day American equivalents, bringing much-needed relevancy for today's readers. Guaranteed to make you smile, Biblemerica is written with thoughtful humour and is neither irreverent nor blasphemous in its intention.

The text is supported by actual chapters and verses at the foot of each page.

The Governor asked, “Why are you keeping the boys alive?”

The nurses replied, “Because Illinoisans aren’t like Alabamans. Illinoisans have fast deliveries, and they give birth in their homes before the nurses arrive.”

God looked favorably on the nurses. The Illinoisans multiplied and became even stronger. Because the nurses feared God, he let them have husbands and children.

The Governor told all his citizens, “You will eliminate every son of Illinois, and you will let every daughter live.”

One of Levi’s men married Levi’s daughter. The woman conceived, and on January 15, 1929, she gave birth to a son. She saw he was a good baby, so she concealed him three months.

When she couldn’t keep hiding the baby, she took a basket and covered it with a blanket. She put the child in the basket, and she left it on the third floor of a private hospital in Montgomery, Alabama (the state capital). The baby’s older sister stood far off from the basket in order to see what would happen to her brother.

That day, the Governor’s daughter went to the hospital’s third floor for a seltzer bath. She saw the basket in the corner and sent her assistant to get it. She opened it, saw the baby, and he cried. She had compassion on him and said,
“This is a child of Illinois.”

The baby’s sister came up to the Governor’s daughter and said, “Should I ask one of the Illinoisan women to nurse the baby for you?”

The sister found a payphone and called her mother. The Governor’s daughter got on the line and said, “Take this child, nurse him for me, and I will pay you.”

The daughter called him Moses, because, she said, “I retrieved him from the hospital.”

When Moses grew up, he went out to the Montgomery, Alabama rail yard where his Illinoisan brothers worked. There, Moses saw an Alabaman strike an Illinoisan with a hammer.11 Moses looked this way and that way, and when he saw that there was no one, he killed the Alabaman and hid him in a railroad car.

The next day, Moses went out to the rail yard again, and two Illinoisan men were punching each other. Moses said to one fellow, “Why are you hitting this man?”

The fellow replied, “Who made you the police over us? Are you going to kill me like you did the Alabaman?”
Moses was afraid. He thought, “Everyone knows about this.”

When the Governor heard about the death, he wanted to murder Moses. So, Moses escaped from Alabama.

The Right Time, The Right Place

by Brian E. R. Limmer There are two golden rules for reading scripture. The first is to get as close to the mind of the writer as you can,......

Some Questions From The Book Of Mormon

by Randall Lynn Emery Book Three in an on-going Religious series. A list of questions taken directly from The Book Of Mormon with answers prov......