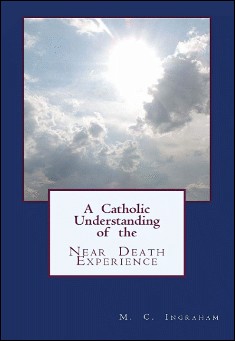 Free book: A Catholic Understanding of the Near Death Experience
By M. C. Ingraham

The book concludes that all major NDE elements are within the bounds of Catholic theology. The light tunnel and friendly light beings are part of common culture, but NDE reincarnation, previous lives and "the contract" are assumed to be at odds with Catholic theology. These NDE elements are actually mislabled and misunderstood but are with the bounds of Catholic theology. NDE elements examined are: Light tunnel, Light being(s), Boundary of Heaven, Jesus, Life contract and task , Previous lives, Reincarnation (future lives), Life review, Heaven, Unconditional love, Salvation, Religion, Spiritual level (vibration of spirit), Purgatory, Hell, Distressing NDE, Ketamine induced NDE; and more.

“It was midnight and I was walking to my car which was parked on the street. A man emerged from hiding and demanded by wallet and keys. He had a knife. I dug into my purse for the wallet and pulled out my pepper spray, but he stabbed me before I got off an effective spray. He stabbed me once more then ran.”

“I started my car and drove towards the hospital which was several miles away. On the way I passed out and hit a telephone pole. The next thing I was aware of was looking down at a woman in an emergency medical clinic.1 She had been stabbed and the staff had just stopped resuscitation attempts.”

“It then occurred to me that the woman might be myself. I was near the ceiling, but I could see the entire area of other rooms. I went down to the woman to examine her ring which looked like my own class ring. As I was beside her, trying to lift her arm the nurses moved right through me, and my hand was likewise unable to grasp the victims hand. I arrived at the certainty that the victim was me because of a tattoo, scars and dental work.”

“I was then aware of being pulled into a tunnel of light, and being propelled toward a singular point of light at the end. I felt no fear, and was entirely at peace. I arrived at the light, which would be unbearable in intensity, but again I felt only peace.”

“The light then took the form of a man. I recognized him as my brother who had died several years ago. Other people came into view, I did not know their faces, but I felt that we were all family. All the while I felt an intense love from all of them. One held a cat who also projected love to me.”

“My brother spoke to me, telling me how proud everyone was of me. I asked him who were these people and where was I? He pointed to a gate and said it was the entrance to Heaven, but it was not yet my time and I could not enter. He also said that Jesus would be pleased to speak with me.”

“I consented, but all the time we were communicating without words, we used only thought. Someone then said, ‘I am pleased to see you Jane.’.”

“It was Jesus. I was not told this, but I knew who he was with certainty. He was of medium height with brown hair and quite beautiful. It was now just Jesus and me, and I wondered how he could run Heaven and take time out for me alone.”

Resident Skeptic -- POSTMODERNISM BORN OUT OF DUE SEASON

by James R Cowles I was raised a fundamentalist Baptist, and eventually migrated to conservative, but non-fundamentalist, Protestantism. O......

by John Everett This is a continuous account of the life and teaching of Jesus Christ using the four gospels (in a modern translation) i......