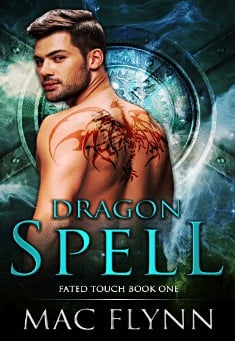 Jane is a normal orphan with unusual grandparents. She doesn’t realize how unusual until she returns on holiday from college to discover that her grandmother has been kidnapped. Her grandfather reveals that her kidnappers are a new foe from an old world, and her grandmother’s only hope is for them to travel to the other side after her.

The Shifting World, however, isn’t as easy as ours. Every monster, witch, demon, and other mystical fable that haunts the fairytale books of our world resides among those lands. Jane finds herself stumbling through one adventure after another as she tries to learn the ropes, and the magic, of the new world in order to save her grandmother, and herself.

Even a place as strange as the Shifting World, however, has its familiar handsome men. One of them is Caius, a dragon shifter with a sly smile and a glint in his eyes. He joins their search for her missing grandmother, but Jane isn't so sure it isn’t another member of her family that he’s interested in.

Tears dry eventually, and I had a lot of time to dry mine. My grandparents helped, especially during those first few months. It was a hard transition from one life to the next, but their quaint little two-story cottage nestled up against the last remnants of wilderness in the city limits helped ease my pain. There were trees to climb (and fall out of), squirrels to chase (and be chased by), and the quiet walk through the brambles (followed by a hard scrub of peroxide against my many scratches).

Quiet. Peaceful. Secretive. There were some places I couldn’t go, and the rules were laid down as I broke them. Curious as I was, it didn’t take much time to break all of them.

The first started with a curious exploration of the attic. The little cottage’s attic was a narrow strip along the highest peak of the roof, and over the rafters of the second-floor ceiling were placed ply-wood and on top of that were chests and boxes filled with the unknown.

My grandparents thought I couldn’t reach the ring on the attic trap door, but I reached it via an end table in the hall and a heavy stack of books swiped from my grandfather’s extensive library on the first floor. My precocious self grasped the ring in both hands and gave a might tug. The trap door came down followed by the heavy wooden ladder. It hit the floor just shy of scuffing the top of my grandmother’s end table.

I rhetorically wiped my brow and scurried up the ladder to the unknown. The attic was dark, lit only by two small windows at either end of its long stretch. They showed the setting sun. My grandparents would be home soon from their card party. I crept along the ply-wood that acted as the floor and feasted my eyes over the many trunks and boxes.

One of the boxes caught my attention. It was rectangular and made of a dark wood. The faces were unadorned except for the lid which had a honey bee flying in front of a bolt of lightning. My young, childish mind thought they were cute, so I plucked it from its stack and tried to pry open the lid. No-go. A small silver lock in the clasp kept me from discovering the mysteries of what I had dubbed The Bee Bolt Box. I tried to pry it open with the nail of my pinky finger, but it wasn’t a good substitute for a pick.

As I was still fumbling with the lock the shadows outside lengthened. A faint sound came from below me, but my complete concentration lay on prying that wonderful box open. Maybe I could use it as a jewelery box, or maybe a box to put my little glass animals. Or maybe-
“Jane!”

I yelped and spun around to face the trap door. The last glimmer of sunlight disappeared from the windows, and only the glow from the hallway light gave my weak eyes a look. My grandfather’s face peeked out from the floor like a disembodied head. For a second I thought his head had come to scold me for my prying like some haunting figure. That got me screaming and in my fright I dropped the box.

My grandfather’s eyes widened and he used the floor to lung up and forward. He stretched out his hand and caught the box in his palm.

My grandma peeked her head above the floor and looked around. “My goodness, it’s dusty up here.”

“And that makes it no place for a young lady,” Grandpa added as he set the box back in its place courtesy of the dustless spot atop the boxes.

Grandma’s eyes fell on the box and her face lit up in glee. “Are we to have-”

“Dinner,” he interrupted her. “Isn’t it about time for dinner, Bee?”

She sighed, but a little smile played across her lips. I quickly learned that that look meant trouble or teasing, or both. “Oh, I suppose so. Come along now, you two, before you change into a couple of shades.”

“But I can’t be shade,” I protested in my infinite four-year old wisdom as my grandfather shooed me toward the trap door.

“You won’t be because you’re staying out of here,” he assured me as we climbed down the ladder. Grandpa pushed the door back into the ceiling and turned to me with his steely gaze. He knelt in front of me and set his hands on my shoulder before he looked into my eyes. “Now Jane, I’m going to lay down a few rules. The first rule of the house is you don’t go up to the attic.”

“Because it’s dark up there.”

“And you’re not supposed to be up there.”

A snort escaped my grandfather’s lips as he shook his head. His expression was less of annoyance and more of admiration. “You’d make a good High Inquisitor.”

“What’s a high quizzer?” I asked him.

He shook his head and stood. “It’s nothing. Just forget I said it.”

Grandma took my hand and led me toward the stairs. “How about we start dinner together, Jane? You can help me boil water for the spaghetti.”

That was a good distraction. Spaghetti was my favorite meal, not least of which because the meat balls my grandma made were always huge. However, that didn’t entirely wipe the episode off my mind.

I glanced over my shoulder and looked forlornly at the shut attic door. Maybe someday I’d go back.