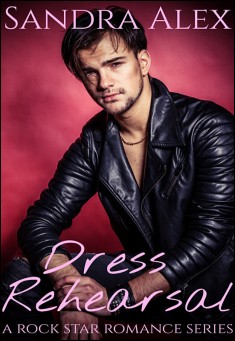 The tormented guitarist. The fearless security guard. The kiss that’s seen globally. The razor blade that threatens to end everything.

Billy Nestor has everything he’s always wanted: a band, the best guitar skills, a creative edge like no other, a thick skin, and the chops to climb the charts. The one thing he’s missing is a supportive father. While his mom is his biggest fan, his father has chided him since the day he picked up an instrument, slating that the boy would never amount to anything unless he applied himself to something other than heavy metal.

Michelle Parsons has seen the world through the eyes of the battlefield. She’s determined, tough as nails, and has enough brains and drive to get her anywhere she wants to go in the world. Until she gets fatally shot in combat and has to take a backseat job as a security guard for a nothing band, and what’s worse, she gets the job after her dad calls on a friend for a favor. Despite the disappointment, she quickly learns that protecting a band is almost as exhilarating as dodging landmines behind enemy lines. In the band’s third month of touring as an opening act, the city that they play in is riddled with an unexpected, potentially life-threatening situation. Michelle has to put her life on the line once again, only this time, without her hard hat and camouflage.

After getting the band on the stage safely, a certain band member seeks her out once the applause quiets, and a fast friendship evolves. Billy finds himself seeking Michelle out, escaping the sheltered life inside the hotel room, until Michelle and Billy come to an impasse on a serious topic, one close to Billy’s heart. But little does Billy know that Michelle has also become close to his heart, and he doesn’t realize it until she climbs onto the shuttle bus to go back to the airport…out of his life forever.

A heartbreaking, true-to-life story about the trials and tribulations of being a rock star, and falling in love unexpectedly. Billy and Michelle’s story will leave you laughing, crying, and rooting for the main characters as they take you through their journey of love, heartbreak, success and triumph.

The sweat beading on my back is beginning to trickle down, but I try to ignore the sensation, and focus on getting the band to their dressing room in one piece, and before Mr. Bush decides to whiz on one of the walls leading to the room. Hopefully there is a washroom inside the dressing room, and I pray to God that the staff here were at least competent enough to clean it after the last band was here. As we find the room, I realize that it is a makeshift dressing room, with literally nothing in it other than a couple of wooden benches and some hooks on the walls. The painted brick resembles an old library.

“Sorry, guys. Snake must have the other dressing room.” It looks like an old utility room for the maintenance staff. Smells like it, too. At least there is a tiny two-piece bathroom, which I can see from here. It looks visibly clean, even though it’s so old, I swear I can see a cord hanging overhead, like a water closet.

“That’s cool. When are the roadies bringing our shit up?” Neal asks, eying the bathroom. He walks in, unzips, and begins peeing, while still addressing me, having no regard for the fact that his dick is hanging out for the world to see.

I have the grace to turn away. “I’ll find out for you.” I answer, pulling the radio from the clip of my pants. “Michelle to Ned.”

“When is Storm’s stuff coming upstairs?”

Long pause. “I’ll find out.” I place the radio back on my belt. Billy, or Mr. Nestor, walks over to a shelving unit, which holds various industrial cleaning products, and pulls a long sheet of paper towel from the roll. He walks over to me, and without permission, simply pulls my bleeding hand up, wrapping the towel around it. “So, are you going to tell me how you did this? Or do I have to guess?” he asks. The tone in his voice reminds me of when my dad used to address me as a child, when I did something I shouldn’t have done, and he wanted the truth.

“There was a long piece of metal sheeting covering a window that I had to move, so I could see out the window.” I explain, as he applies pressure to my hand. “Didn’t realize said metal had a sharp edge.”

He ignores my statement and pulls the paper towel away when it’s sufficiently soaked with blood. He looks at the wound and seems almost impressed by it. “F*** me…that’s going to need stitches.”

“Oh yeah?” Danny comments, coming to take a look. Suddenly, my bloody hand is more interesting to them than the fact that there is a bank robber on the loose, their clothes and belongings are in limbo, and for all intents and purposes, they’ve been handled like a bag of dog shit coming to perform at this venue.

“Not as much as getting shot did.” I guffaw.

“Really? You got shot?” Danny is about to burst.

I smile. I don’t think I’ve ever had this much male attention before in my life. Men usually ignore me. And military men are trained to focus. “That’s how I got discharged from combat.” I answer.

Ivan joins in on the charade. “Did you ever shoot anyone?” I nod. “Yes.” I hesitate. “It’s not something I’m proud of, but it was either shoot or be shot.”

Neal flushes the toilet and primps himself in the grimy mirror above the sink. “Did you kill him?”

“Did you kill anyone?” Ivan asks.

“Probably. But it’s not something that you keep count of when you’re in a battle zone. Generally, you’re more interested in getting out alive than keeping score.”

by Sandy Appleyard A Town Without Pity Book 1 A riches to rags cowboy. A hardened cowgirl. The gunshot that erases all doubt. Laura W......