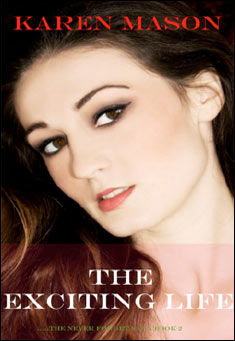 The Exciting Life
By Karen Mason

Officially licensed for obooko members. Scroll down to get your free book. Age Rating 17+

A sister and brother, adopted at the beginning of the second world war by by Nesta Villiers, have now reached adulthood. After the suicide of her racing driver husband, Annie is now widowed and heavily in debt. While Kenneth is managing his aunt's business. Now entering their lives is the enigmatic Iris Lindholm. Will things ever be the same again?

Annie Holland put down the bottle of Chanel No.5 and looked at her watch. It was nearly nine o'clock. Three hours to go until it became 1959 and three days until she reached twenty-five. She turned back to the mirror on her dressing table and leaned closer. Had any lines appeared? Could she still be considered a youthful beauty? It was hard to tell. She'd applied so much of her signature smoky make-up around her eyes, it was impossible to see if any wrinkles had started to form. Her pout had been accentuated with its usual rose coloured lipstick, and the powder around her mouth stopped it seeping into any spider lines that may have formed. Annie was wise enough to know that a girl's face was her fortune; and if she started to lose her looks, she was up shit creek without a paddle.

There was a call from the hall, which jolted her back to her senses.

'Are you ever coming out of there!' Mandy, her best friend shouted impatiently. 'That poor taxi driver's been waiting for half an hour.'

'It's alright for you,' Annie said, standing up and smoothing down her black shift dress. She then creased it again by bending over and checking her chignon was still in place. Enough people had told her she looked like Audrey Hepburn, she felt she had to keep up the illusion. 'You're gorgeous without the aid of a ton of make-up.'

She found Mandy at the tatty little mirror that had come with the furnishings of the flat, and decided her glamorous friend, with her long, wavy blonde hair and curvaceous, Marilyn-type figure looked out of place in such dingy surroundings.

'How do I look?' Annie asked, reaching for her swing coat, which was hanging from the rusty brass hook on the wall. She really needed to spend what little money she had on improving the decor of this place.

'Like Audrey Hepburn on the game,' Mandy quipped, taking one more glance in the mirror and standing on tip toes so she could ensure her tight-fitting midnight blue dress showed enough cleavage. 'Come on, let's go.'

They left the house and walked down the front steps to the pavement. Annie still couldn't get used to living in this grotty little Fulham street. Not after all those years of living in Knightsbridge with Mario. Harrods used to be her nearest shop. Now it was old Mrs Hawley's off licence on the corner of Filmer Road. She couldn't wait to get into the taxi and be on her way to Bruno's. At least for a few hours she could pretend to be wealthy again.

It was a freezing night, and Annie snuggled close to Mandy as the cab drove through the London streets, and the dinginess of Fulham turned into the more upmarket Chelsea - reminding Annie of what she'd left behind.

'You two got fellas waiting for you at this nightclub?' the taxi driver said.

Annie stifled her laughter. Mandy always said this when she wanted to shut a bloke up. Her boyfriend was actually called Jeremy, and he was an investment banker who was currently spending the holiday season with his very posh parents in Suffolk. Indeed where Mandy had been over Christmas.

'What about you?' the taxi driver asked Annie, and she noticed him wink at her in the rear view mirror.

'It's my nightclub,' she said confidently. 'So I'd better make an appearance.'

'Your nightclub!' the taxi driver exclaimed. 'How did a pretty little thing like you get to own a nightclub?'

'From my husband committing suicide,' Annie replied matter-of-factly. That shut the cab driver up. Well, for a few moments anyway.

'I'm sorry to hear that love,' he said, his tone turning serious. 'What's he do that for when he had a beautiful girl like you waiting for him at home?'

'Oh he just thought it was easier to die and leave me his debts,' Annie sighed, looking out of the window and feeling a stab of pain as they drove past Harvey Nichols. Mario - the bastard - had promised to buy her a mink coat from there for her twenty-fifth birthday. Instead, all her furs, diamonds and other treasures had been sold to pay off his gambling debts. But for all that, she missed him. He'd been her first love and she couldn't imagine falling head over heels for someone in such a powerful way ever again.

'She's just being a misery guts,' Mandy laughed, trying to lighten the mood. 'Everyone knows that Bruno's is one of the top clubs in town. She makes a fortune. Don't you worry about her.'

Mandy and the taxi driver then started talking about the famous faces who'd frequented Bruno's, and the things they got up to. Annie was glad they were leaving her out of it, because it gave her a chance to sit back and think about her situation. Bruno's was the only asset she had in the world. All her friends thought she was mad - her adopted Aunt Alice was better known as Alicia Bloom - one of the world's greatest actresses. She could go and stay with her in her New York penthouse apartment any time she liked or even stay in the house in Belgravia that Alice owned. She could even go to Hollywood and stay with her 'cousin' Alana - Alice's daughter; her husband Dirk dealt in finding homes for people, and would happily find her a little beach-side condo. But Annie didn't want their charity. Whilst she'd had a wonderful childhood, at just five, becoming the legal ward of Sir Michael and Lady Nesta Holland; growing up in Elliott House in Oxford, and enjoying a private education and having ponies and all the things a girl who was born in the slums of Battersea, should never have. At the end of the day, none of it was her birthright, and she couldn't keep taking off her family.

Marrying Mario at eighteen had seemed like the answer to all her prayers. What young girl straight from boarding school wouldn't have their head turned by a handsome Italian racing driver? And even though she'd lived on his money, at least she gave him something in return. She slept with him each night, and always looked good so he'd have a trophy on his arm. What she didn't know was that behind her back he kept a string of mistresses and thousands of pounds of gambling debts run up in every country he'd ever raced in. And when it had all got too much, he'd driven into a brick wall to escape his responsibility.

Now the only asset she had was Bruno's, the nightclub Mario had won in a card game against some gangster. It brought in enough money each week for Annie to pay the rent on the Fulham flat and to keep herself looking nice. But even Mandy didn't know that the shoes she was wearing were a pair she'd paid ten bob for from a stall on North End Road market. She'd tarted them up with a red silk bow she'd got in Barbers the department store and they now looked like something from an exclusive boutique in the South of France. Annie couldn't afford the real thing any more.

Bruno's was situated beneath a French restaurant at the Oxford Street end of Wardour Street. It was just far enough away from Soho to be semi-respectable, but Annie knew darn well that most of her clientele were dodgy - villains who wanted to be photographed with some minor celebrity, or MPs who enjoyed ogling the young hostesses. But they were her bread and butter, so she had no choice but to paint on her cheeriest smile and help them see in the New Year.

As she and Mandy entered the club, their coats were taken by Sylvio, Mario's cousin who worked as a meeter and greeter.

'How are things?' Annie asked, peering into the club.

'Not bad, but there are a couple of dodgy-looking sorts I don't recognise.'

'Who am I looking out for?'

'Fat, greasy-looking sod who looks like a vampire and a good-looking bloke who's with a blonde with big tits. Not sure who they are - probably nobody, but you know me Annie, I have a sense about these things.'

'Thanks for the warning,' Annie said. 'I don't need any trouble tonight. I'm not in the mood.'

They walked into the club, and Annie was pleased to see it was packed. She recognised all the usual faces - a few models and starlets, a couple of Maltese gangsters and their floozies. The rest were people who'd taken their chance and come in, hoping to have a good time. The house band - led by Ray Scott, were playing some light jazz on the stage, and the air was filled with smoke and the smell of alcohol. A few people came up to greet Annie and she gave them the cursory 'hello' and 'how are you?' before moving on to the next person - all the while looking out for the interlopers. She'd had a gut feeling for ages that Bruno's would be the next thing on Mario's debtor's list and that someone would come along to take it off her. Maybe these strangers were henchmen, come to start trouble.

'Hello Annie darling,' a voice suddenly said, awakening her from her thoughts. She looked round and saw it was Moira Brand, a young up and coming actress who used to go out with Kristien Lax, an old team mate of Mario's. Even though they'd split up, she still came to Bruno's. Mandy couldn't stand her for some reason and predictably walked away as soon as Moira joined them.

'Hello Moira,' Annie said, kissing her on both cheeks. 'How are you?'

'Rather excited,' Moira fizzed in her deep, plummy voice. Annie always wondered if Mandy's dislike for her came from the fact that Moira was a genuinely classy blonde. Her mother was a Lady and her father a banker. Whereas Mandy did her best to hide the fact that she grew up in Enfield and her dad was a station manager for London Underground. 'I found out just before Christmas that I'm making a film with James Robertson Justice and Sylvia Sims.'

'Oh it's some comic caper. I play a secretary who discovers a secret plan to bomb the Russians. I don't really care. It's my first proper supporting role and that's all that matters.'

'The first of many,' Annie said. 'Can I get you a glass of champagne to celebrate?'