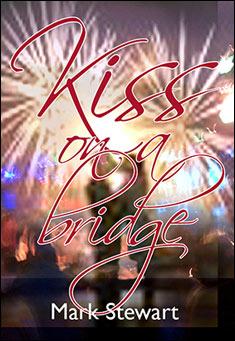 Kiss on the Bridge
By Mark Stewart

If a handsome man you had never seen before came up to you on new-years-eve and asked for a kiss, how would you react ?

This novel is set in the year 1974. Striking land fall in Darwin on 25th December 1974 at 9:55am and desecrating Darwin, was Tracy, the infamous cyclone. After the storm had devastated the state there was nothing left ... except this story. From the ruins, love sparked and developed between Wade and Anneli, who were destined to meet and relate their story for years to come.

He'd strolled along the bridge overlooking the Yarra River, stopping at arm's length to a young lady.

"Is it?" questioned the brunette.

"Yes. I have to add the stars are complimented by your beauty."

The woman he spoke to seemed to have misunderstood the meaning. She remained staring out across Port Phillip Bay. After several moments, she turned her head so she could look directly into the man's eyes.

"May I request your last name? Before you answer, let me guess, you never disclose the name to a stranger standing in the middle of a bridge on new-year's-eve."

"It's a tradition," teased Anneli.

"I again ask my first question."

"Are you always this insistent on hearing answers to your questions?"

Wade let a friendly chuckle slip. "I have to apologize. I never meant to sound rude or invasive."

"To comment on your opening line, it could be a nice night. I'm actually hiding from my father and brothers so I can watch the fireworks, alone."

The young lady focused her attention back on the bay to a point on the horizon. Wade had seen the look too many times before. He could easily slip into the faraway daydream too. The tone >of the young lady's voice signaled she definitely wanted to be left alone. Wade started to weigh up the pros and cons of walking back the way he came when she spoke.

"I'm waiting for my hero to save me from my life," whispered Anneli, shifting her attention to where she stood.

Wade's quick sidestep closed the gap between them by half. "Good luck. Before I leave you to your thoughts, this is new-years-eve. It's an Australian tradition everyone must have a kiss to see in the New Year. May I?"

Anneli lifted her gaze. She gave him a warm attractive smile. "I wouldn't want to break tradition."

Wade squared himself to Anneli. His blue eyes were inviting. His handsome looks melted the heart of every woman he came into contact.

Anneli shifted her weight from one foot to the other. Her shorts flared out at the sides revealing slender olive coloured thighs. Her white button up shirt crinkled slightly at her shoulders when she raised her hand to halt Wade's advances.

"I never kiss a man I don't know the last name of."

"What if the couple happened to be standing alone on a bridge overlooking a river at midnight?"

Anneli let a whispered giggle leave her throat. She bit her top lip to disguise the noise.

"There are always exceptions to any rule."

Wade slipped his hands onto her hips. His gaze met the young woman's stare. Although her amazing shiny brown eyes were full of life, glistening in the light of the fireworks exploding over Melbourne to welcome in 1974 her spirit revealed a deeply troubled girl.

'The young lady standing before me is indeed an interesting woman,' thought Wade. 'He wondered if their meeting might be no more than accidental, just a moment in time; a kiss on the bridge and nothing more. Could it ever be anything other than a coincidence?'

When Anneli brought her lips in close, Wade leaned forward. He could feel her heels lift off the ground so their lips could be welded.

Wade stood an even six foot. Anneli, wearing her black two-inch heels almost matched his height. She lifted her hands to hold onto Wade's shoulders, signaling she didn't want the moment to end. He felt it in her strength. He patted himself on the back knowing how to summarize people by the way they looked, talked, sat, stared or gripped their fingers. He'd succeeded in being a good lawyer. His bank balance proved it.

Wade and Anneli's lips lightly touched. He felt her breath quicken when she exhaled and inhaled rapidly. He so wanted time to stand still. Slipping his arm further across Anneli's back, he started to dip the woman. She didn't resist. The light touching of their lips teased him. Their lips touched and retouched. Every muscle in his back flexed, anchoring the woman safely in his arms.

The young lady reeled him in closer, welding their lips.

Not only did Wade kiss her long, gentle, using maximum passion, she kissed him back.

Emotions flowed unrestricted between them. The intensity of the kiss didn't fade. It grew stronger.

The kiss had meaning, a magnetism of its own. Wade felt positive he'd never been kissed so passionately before. He wondered if the young woman in his arms felt the same. He'd ponder the thought later. He didn't want to skip a single second. He opened his eyes to stare at her closed eyelids. For the first time in his successful career, he could only guess what she might be thinking.

Anneli slowly opened her eyes. She too devoured the moment.

Time stopped for the kiss on the bridge.

The fireworks continued to rage behind them in the night sky. The bright lights seemed to heighten the kiss. Maneuvering her arms for a firmer grip, Anneli wanted to portray to this tall handsome stranger the kiss happened to be the most enjoyable moment she'd ever felt in twenty years of being alive. She didn't want anything to interrupt the kiss on the bridge.

As if she were a delicate red rose in full bloom, Wade's arms never flinched while holding the woman. The kiss lasted longer than he planned. How could he attempt to end it? He secretly hoped Anneli might be the one to break the moment. Slowly he brought the woman back to vertical, yet the kiss remained. Their lips were glued for eternity. They sent a silent signal to each other to remain locked.

The only part of the fireworks remaining was the smoke hovering over the bay in a large cloud.

Anneli and Wade slowly pulled away at the same time.

Both took a backward step. Wade nodded politely. Anneli mirrored his move. Both

simultaneously walked off the bridge in opposite directions.

Wade hesitated before stepping off the east side of the bridge. He turned to have a last look at the woman. He saw her stop under a streetlight, looking over her shoulder at him. Her long black hair cascading over her shoulders trapped the light causing each strand to glisten. Her incredible luring brown eyes made his heart skip inside his chest. The way she looked burned the image in his mind. Heat rose up from his feet to his head. He broke out into a sweat. Water trickled down the valley to his lower back.

Again the moment seemed to last for hours.

Wade wondered if the look Anneli threw his way could have been deliberate or completely accidental. The corners of his mouth curled upwards. He felt a stirring in his soul, compelling him to taste her one more time. He took a step towards her.

Anneli did the same.

Both blocked out the ruckus developing behind her, too intent on reliving their kiss.

An older man of average height, wearing a three-piece electric blue suit used his baritone voice to get Anneli's attention. When she faced the older man he reached out, grabbing her on the shoulder. His facial expression quickly changed from relief to stone murderous cold.

Wade set himself to run when another four men surrounded her. He hesitated only just long enough to view the scene in its entirety.

"Daughter, get back to my ship. I have been told of your drunken behavior. We will have words after we have set sail to Darwin. Now go." The man wearing the three-piece electric blue suit faced the other four men of various ages, snarling. "Sons, see to it your sister gets back onboard my ship."

"Yes father," echoed each one in turn.

In seconds they started to escort Anneli off the bridge, slipping away into the night.

Wade felt as though his heart had been ripped out of his chest and thrown into the bay.