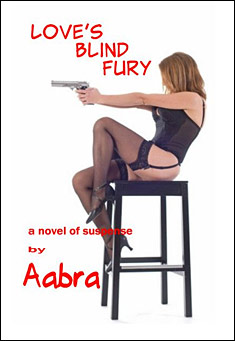 Vicki Karr already has two lovers. First there's body builder Brock Dillon, a two hundred and ten pound, six foot two inch, eighteen-wheeler kind of guy who knows how to drive hard and fast. Then there's Wes McKensey, who packs the same amount of heat and passion but in a smaller, finesse-driven, Ferrari kind of body. Having two lovers, however, doesn't mean Vicki won't feast her eyes on her well-endowed next door neighbor, Don Eddles, whenever she has the chance. But while Don may bare all before an open window, he also has secrets - some of them deadly - that even his wife, Marie, doesn't know about. Likewise, Vicki has a secret of her own, a secret that only she and her thirteen year old techie son, Danny, know about. Vicki is studying to be a Private Detective and the hunky and mysterious Don Eddles is her first case!

The sun had been down for almost an hour and I knew Danny would be coming home any minute. With the tail of my blouse I wiped the binocular lenses for the third time and then fiddled with the focusing dial. Luckily, a light was still on in Don Eddles' first floor bedroom. From my second floor bedroom I could see everything very clearly. At least I could if the lenses didn't keep fogging up!

"Oh my," I whispered as he pulled the tight, short-sleeved yellow golfing shirt over his head. His chest was broad and covered with thick

brown hair. I know, some women hate hairy-chested men but I'm not one of them.

He toed off his loafers and unbuckled his belt. "Oh my-my," I whispered again as his trousers slid down his thickly muscled thighs.

The front door slammed downstairs and I heard the heavy sound of footsteps thumping through the living room which was directly below my bedroom. I knew he would be pounding up the stairway any minute but I couldn't pull my eyes away.

Facing the window now, Don Eddles turned completely around and raked his fingers through his thick shock of brown hair. Then he bent forward slightly, his thumbs hooked over the waistband of his Spandex Jockey shorts. His chest rose up as he took a breath and then, slowly, bumpily, he pushed the Jockeys down.

"Oh ... my ... God," I breathed as my lenses started to fog up again. At the same time, Danny's footsteps started ka-lumping up the steps. He'd be pounding the door in a second.

I snatched another quick look down below and then ran to my dresser and slid the binoculars into my panties drawer. I shoved the drawer shut and then hurriedly switched on the ceiling light.

"Mom?" Danny called out, rapping on my bedroom door. "You in there?"

"Just a minute," I called back. I glanced at myself in the dresser mirror and took a quick swipe at my hair with a comb. I took a deep breath, counted to ten, and opened the door.

"Did you have a good time?" I said as my thirteen year old son charged into the room, his face beaming, his words pouring out at warp speed.

"It was freakin' awesome, Mom. I'm not kidding. Our camp leader is great. He knows all sorts of stuff about science. Knows about computers, too. He said we'll all have to do a science project by the end of camp.

There's this girl, too. You know what a birder is, Mom? It's someone who watches birds through binoculars. Crap like that. I gotta find my binocs before tomorrow. I want to show them to Cindee. She's this girl that sat next to me."

"Okay, Danny," I said. "Calm down. You're talking too fast again." "I know, but what can I do for a science project? I gotta decide by next

week. That's when we have to tell the camp leader what our project's gonna be. Like I said, it has to be done by the end of camp. That's only six freakin' weeks away!"

Danny stopped suddenly and looked around the room and then at me. "How come you're up here? You don't usually go to bed this early."

I felt the heat rise in my throat. I went to my bed and pulled the wrinkles out of the top sheet.

"I was just straightening up my room. Which is something you ought to do every now and then, young man."

He shrugged and looked around again. "Yeah, maybe. But it'll never look as good as your room. You're a freakin' neatnick, Mom. Anybody ever tell you that?"

I mussed his clump of blonde hair. "That's about enough freakin' for now." I glanced at my watch. "And since you mentioned bedtime, I'd say it was about time you hit the sheets, buster. After you take a shower."

"In a minute," he shot back. "First you gotta help me figure out what kind of science project I can do."

Danny shrugged. "You're the one who's always saying I should do stuff now, not tomorrow. Right?"

He had me there, so I thought for a moment. "Remember that show we saw on the Discovery channel last week? About industrial spying. About how big companies spy on each other, hack into each other's computer