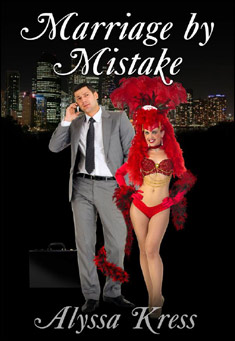 Two days of his life were gone.

Workaholic Boston blue blood Dean Singleton never wanted to act like his irresponsible, womanizing father. But he discovers that he'd been hypnotized, and during that trance had inexplicably flown to Las Vegas and married some airhead show dancer.

Kelly Williams is no airhead. Yes, she impulsively met a man who met her after the show - but only because she could tell they were soulmates. Not so the cold and puritanical man who now claims to be her husband. Is it possible the warm and tender man she does love is buried somewhere inside this iceberg? If so, she's determined to find him.

On a sidewalk in downtown Boston, two thousand miles from home, Kelly Williams should have been standing on the brink of sweet success. Instead, she caught the distinctive whiff of failure.

Jet-lagged and dazed, Kelly braced herself against the people jostling to get to work, her cowboy boots and snug jeans at odds with the tailored suits and designer outfits of the crowd. She peered up at the big, glass office building matching the address of the business card she clutched in one hand. At the roof, huge metal letters spelled out SINGLETON INDUSTRIES.

Please. She was supposed to believe the building was named after Dean? Dean the devil-may-care, Dean the definitely not-at-all-serious Singleton? This big, fancy office building, not to mention the corporation it housed, was named after the casual smile of a man she'd met sliding quarters into a slot machine in time to the song he'd been whistling?

The man she'd foolishly allowed to become her lover, and more, two nights ago? "Drat," she muttered, wishing her upbringing allowed her to use a word that was much, much stronger.


The whiff of failure was becoming a positive stench. Here Kelly'd thought she was going to do something strong for a change, take action when a man walked out on her, instead of sit huddled in her apartment, crying.

She was no closer to the bum than before

With a furious groan, Kelly spun away. She tried to calm down, but it was so...stupid. Indeed, she'd been so stupid since three days ago when Dean had looked up from the slot machine and into her face, his easy grin fading. She'd been sucked in by his seemingly awkward, apparently sincere, charm.

Oh, he'd been an operator, all right. He'd got her, a seasoned chorus girl, to believe every honeyed word and warm look he'd tossed her way. He'd acted like he understood her desire to desert the life of glitter in order to build a real home, a home with a man who truly loved her. Kelly supposed he had understood that part, for he'd used it. He'd sweepingly declared he was that man. He'd said they were made for each other.

And she'd believed him.