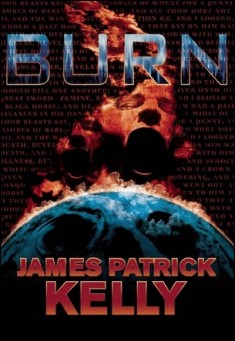 Colonization is the theme of this exciting, complex page-turner that provides a provocative and entertaining look at Thoreau's classic eco-text Walden. Eccentric billionaire Jack Winter has bought the planet Beekman's Pea, renamed it Walden, and created a utopia in which members renounce the technologies of human civilization. Marginalized by these newcomers, the planet's original inhabitants are resisting the colony's dominance by setting fires to Walden's artificial ecology. A member of Walden, Prosper Gregory Leung is a veteran firefighter who believes in protecting Winter's utopian vision, but when he is wounded, he begins to learn of the terrible price that the people of Walden are paying for their paradise. Interwoven with themes of environmental responsibility, political struggle, and courage, this adventure novel nimbly combines political and social relevance with a flawless and gripping narrative from a veteran science fiction author.

Spur was in the nightmare again. It always began in the burn. The front of the burn took on a liquid quality and oozed like lava toward him. It licked at boulders and scorched the trees in the forest he had sworn to protect. There was nothing he could do to fight it; in the nightmare, he wasn’t wearing his splash pack. Or his fireproof field jacket. Fear pinned him against an oak until he could feel the skin on his face start to cook. Then he tore himself away and ran. But now the burn leapt after him, following like a fiery shadow. It chased him through a stand of pine; trees exploded like firecrackers. Sparks bit through his civvies and stung him. He could smell burning hair. His hair. In a panic he dodged into a stream choked with dead fish and poached frogs. But the water scalded his legs. He scrambled up the bank of the stream, weeping. He knew he shouldn’t be afraid; he was a veteran of the firefight. Still he felt as if something was squeezing him. A whimpering gosdog bolted across his path, its feathers singed, eyes wide. He could feel the burn dive under the forest and burrow ahead of him in every direction. The ground was hot beneath his feet and the dark humus smoked and stank. In the nightmare there was just one way out, but his brother-in-law Vic was blocking it. Only in the nightmare Vic was a pukpuk, one of the human torches who had started the burn. Vic had not yet set himself on fire, although his baseball jersey was smoking in the heat. He beckoned and for a moment Spur thought it might not be Vic after all as the anguished face shimmered in the heat of the burn. Vic wouldn’t betray them, would he? But by then Spur had to dance to keep his shoes from catching fire, and he had no escape, no choice, no time. The torch spread his arms wide and Spur stumbled into his embrace and with an angry whoosh they exploded together into flame. Spur felt his skin crackle… .

“That’s enough for now.” A sharp voice cut through the nightmare. Spur gasped with relief when he realized that there was no burn. Not here anyway. He felt a cold hand brush against his forehead like a blessing and knew that he was in the hospital. He had just been in the sim that the upsiders were using to heal his soul.

“You’ve got to stop thrashing around like that,” said the docbot. “Unless you want me to nail the leads to your head.”

Spur opened his eyes but all he could see was mist and shimmer. He tried to answer the docbot but he could barely find his tongue in his own mouth. A brightness to his left gradually resolved into the sunny window of the hospital room. Spur could feel the firm and not unpleasant pressure of the restraints, which bound him to the bed: broad straps across his ankles, thighs, wrists and torso. The docbot peeled the leads off his temples and then lifted Spur’s head to get the one at the base of his skull.

“So do you remember your name?” it said.

Spur stretched his head against the pillow, trying to loosen the stiffness in his neck.
“I’m over here, son. This way.”

He turned and stared into a glowing blue eye, which strobed briefly.

“Pupil dilatation normal,” the docbot muttered, probably not to Spur. It paused for a moment and then spoke again. “So about that name?”

The docbot stroked Spur’s palm with its med finger, collecting some of his sweat. It stuck the sample into its mouth. “That may be what your friends call you,” it said, “but what I’m asking is the name on your id.”

The words chased each other across the ceiling for a moment before they sank in. Spur wouldn’t have had such a problem understanding if the docbot were a person, with lips and a real mouth instead of the oblong intake. The doctor controlling this bot was somewhere else. Dr. Niss was an upsider whom Spur had never actually met. “Prosper Gregory Leung,” he said.

“A fine Walden name,” said the docbot, and then muttered, “Self id 27.4 seconds from initial request.”