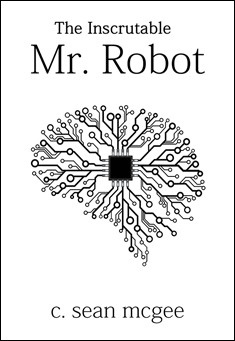 Morality and humanity come into question as a robot, overwhelmed by the promise of his own potential, discovers meaning and purpose in a bloody showdown with ex-superheroes, dastardly villains, and lesbian justice warriors.

“What exactly does it do?”

All eyes turned to the robot on the stage. Contrary to all the commotion, it didn’t look very impressive. One would have expected some life-like mechanoid that was indistinguishable from the people who built it and from those reporting. Unlike the old man who spoke on its behalf, this robot didn’t have skin and it wasn’t wearing clothes of any kind. It had no hair or eyebrows, and at best, its face could muster barely a handful of expressions. It hadn’t an inch of personality. It looked, at best, as if it were engineered from the drawings of a small child – a child with little to no imagination.

“He’s doing it,” said The Engineer.

All eyes fell back on the robot that was sitting lifeless on the stage.

“I’m sorry to disappoint, but this is a present-day robot.”

“Yeah sure, but this thing looks like a couple of old washing machines stacked together. I don’t see it. What am I missing?”

You could see the frustration on The Engineer’s face – having to defend himself to a loud-mouthed bully; someone who would no doubt defend her own ignorance by labelling the science she did not understand as stupid and irrelevant. But this would not deter The Engineer, for as frustrated as he was, when he looked back at his robot, his heart swelled with pride.

Instantly, a quiet hush blanketed the room. A thousand cameras pointed at the stage, and just as many fingers twitched in nervous wait for what should come next. Nobody dared say a thing. Nobody dared blink. They all sat on the very edges of their seats, teetering on the brink of exhilaration.

Mr. Robot turned his head and looked at The Engineer. He blinked twice and nodded, almost as if he were not only acknowledging his creator but assuring him too. But how could he? He was just a robot.

“Just a little?” asked The Engineer.

There were a few laughs from the gallery.

“So cute,” said one person.

“It is, isn’t it?” said another, a little surprised.

The Engineer knelt down in front of Mr. Robot and from across the table, he took the robot’s metal hands and squeezed them tight, and then he smiled. He didn’t say anything, not at first. He didn’t need to. It was that very smile which had kept Mr. Robot safe from every crack of thunder and from every creaking floorboard; and it was that very same smile that had kept all the spooks and monsters away when the lights were turned out. And even though Mr. Robot’s eyes were closed, he knew The Engineer was smiling; and so slowly, he opened one eye after the other.

Still smiling, The Engineer asked, “Do you want to play a game?”

by Jay Caselberg Set in a distant binary star system, warring families struggle for supremacy. Against a backdrop of cataclysmic conditio......