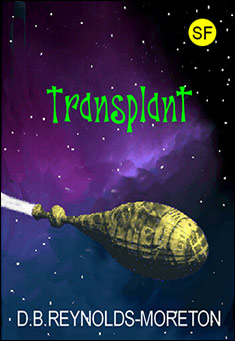 Stupidity, greed, and isolationistic fundamentalism between the three main super powers had pushed mankind to the very brink of the slippery slope leading to irrevocable mutual destruction. It only needed one more small 'international incident' to begin the terminal process of man's demise on planet earth, and it happened.

Just before the holocaust began, a small group of wealthy and reasonably sane individuals got together to discuss what could be done to save some small remnant of humankind.

The conference concluded that a small group of as near genetically perfect people as possible should be sent to another star system, hoping to find a similar planet to earth on which to continue the human race ...

Glyn Bolstrom burst out of his nightmare into the inky blackness of the cabin, his body bathed in an ice cold sweat and shaking uncontrollably. He could still see the group of hideously distorted faces surrounding him, mouthing their obscenities as his trembling fingers groped for the elusive light sensor pad behind his head.

Wave after wave of panic surged throughout his body as he tried unsuccessfully to differentiate between reality and the terrifying sequence of events which had made up his nightmare.

Eventually, his desperately searching fingers brushed across the smooth raised surface of the sensor pad and the cabin luminary flashed into life, flooding the area around him with its harsh blue white light, adding a hint of sanity.

The grotesque collection of distorted faces slowly faded from view, but not before another shudder had rippled through his already shaking body.

Glyn breathed a sigh of relief, his breath whistling through his still chattering teeth as he heaved his body into an upright position on the bunk bed.

‘I can’t take much more of this.’ he cried out loud.

‘Having one of your nightmares again, dear?’ His wife had been woken by his thrashing about as he came out of the horrible dream.

‘Yes, and the damn thing is getting worse each time it occurs. I can still see their awful faces after I’ve put the light on. Sorry to have disturbed your sleep yet again.’

‘Don’t worry, dear. Tomorrow, or I should say today, is Sunning Day, so you can sleep on a little and catch up on your rest as there are no set tasks for you today, as far as I know. At least, I didn’t see any on the screen last night.’

‘Try to get back to sleep, dear, and I’ll see if we can get some help in the morning.’ and with that she turned over and drifted back into her slumbers.

He knew no help would be forthcoming as the Medic had broken down, or to be more precise, was only working intermittently, and then it only offered random advice which rarely fitted the problem asked of it.
Glyn would have liked to go back to sleep, but he was now afraid to in case the faces returned. One helping of that nightmare was quite enough for one sleep period, he thought.

His sleep had been disturbed for several weeks now, and the nightmare always began at the same point.
His wife was just about to give birth to their first born, although in reality they were not due to have children for some years yet, unless there was an unfortunate terminal mishap among one of the other members of the ship.

by Candy Ray A story of time travel and mysticism, with a dystopian shade. Lydia and her girlfriend Moona are classical musicians......

The Wizard From Vahan

by Candy Ray Jasper is an apprentice magician in a society of the future, where chaos magic has become the dominant religion. He does......