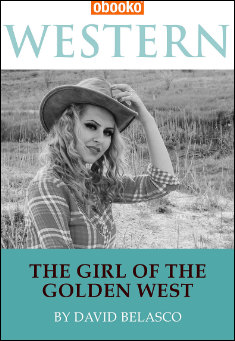 Free book: The Girl of the Golden West
By David Belasco

The Girl of the Golden West, set in the California Gold Rush, was also written and performed as a Broadway stage production and later as a musical western movie.

It was when coming back to the mines, after a trip to Monterey, that the Girl first met him. It happened, too, just at a time when her mind was ripe to receive a lasting impression. But of all this the boys of Cloudy Mountain Camp heard not a word, needless to say, until long afterwards.

Lolling back on the rear seat of the stage, her eyes half closed,— the sole passenger now, and with the seat in front piled high with boxes and baskets containing rebozos, silken souvenirs, and other finery purchased in the shops of the old town,—the Girl was mentally reviewing and dreaming of the delights of her week's visit there,—a visit that had been a revelation to one whose sole experience of the world had until now been derived from life in a rough mining camp. Before her half-closed eyes still shimmered a vista of strange, exotic scenes and people, the thronging crowds of carnivals and fêtes; the Mexican girls swaying through the movements of the fandango to the music of guitars and castanets; the great rodeo with its hundreds of vaqueros, which was held at one of the ranchos just outside the town; and, lastly, and most vividly of all, the never-to-be-forgotten thrill of her first bull-fight.

Still ringing in her ears was the piercing note of the bugle which instantly silenced the expectant throng; the hoarse roar that greeted the entrance of the bull, and the thunder of his hoofs when he made his first mad charge. She saw again, with marvellous fidelity, the whole colour-scheme just before the death of the big, brave beast: the huge arena in its unrivalled setting of mountain, sea and sky; the eager multitude, tense with expectancy; the silver-mounted bridles and trappings of the horses; the many-hued capes of the capadors; the gaily-dressed banderilleros, poising their beribboned barbs; the red flag and long, slender, flashing sword of the cool and ever watchful matador; and, most prominent of all to her eyes, the brilliant, gold-laced packets of the gentlemen-picadors, who, after the Mexican fashion,—so she had been told,—deemed it in nowise beneath them to enter the arena in person.

And so it happened that now, as the stage swung round a corner, and a horseman suddenly appeared at a point where two roads converged, and was evidently spurring his horse with the intent of coming up with the stage, it was only natural that, even before he was near enough to be identified, the caballero should already have become a part of the pageant of her mental picture.

Up to the moment of the stranger's appearance, nothing had happened to break the monotony of her long return journey towards Cloudy Mountain Camp. Far back in the distance now lay the Mission where the passengers of the stage had been hospitably entertained the night before; still further back the red-tiled roofs and whitewashed walls of the little pueblo of San Jose,—a veritable bower of roses; and remotest of all, the crosses of San Carlos and the great pines, oaks and cypresses, which bordered her dream-memory of the white-beach crescent formed by the waves of Monterey Bay.

The dawn of each day that swept her further from her week in wonderland had ushered in the matchless spring weather of California,—the brilliant sunshine, the fleecy clouds, the gentle wind with just a tang in it from the distant mountains; and as the stage rolled slowly northward through beautiful valleys, bright with yellow poppies and silver-white lupines, every turn of the road varied her view of the hills lying under an enchantment unlike that of any other land. Yet strange and full of interest as every mile of the river country should have been to a girl accustomed to the great forest of the Sierras, she had gazed upon it for the most part with unseeing eyes, while her thoughts turned, magnet-like, backward to the delights and the bewilderment of the old Mexican town. So now, as the pursuing horseman swept rapidly nearer, each swinging stride of the powerful horse, each rhythmic movement of the graceful rider brought nearer and more vivid the vision of a handsome picador holding off with his lance a thoroughly maddened bull until the crowd roared forth its appreciation.

"See, Señorita," said the horseman, at last galloping close to the coach and lifting his sombrero, "A beautiful bunch of syringa," and then, with his face bent towards her and his voice full of appeal, he added in lower tone: "for you!"

For a brief second, the Girl was too much taken back to find the adequate words with which to accept the stranger's offering. Notwithstanding that in his glance she could read, as plainly as though he had spoken: "I know I am taking a liberty, but please don't be angry with me," there was something in his sweeping bow and grace of manner that, coupled with her vague sense of his social advantage, disconcerted her. A second more, however, and the embarrassment had passed, for on lifting her eyes to his again she saw that her memory had not played her false; beyond all chance of a mistake, he was the man who, ten days earlier, had peered into the stage, as she was nearing Monterey, and later, at the bull-fight, had found time to shoot admiring glances at her between his daring feats of horsemanship. Therefore, genuine admiration was in her eyes and extreme cordiality in her voice when, after a word or two of thanks, she added, with great frankness:

"But it strikes me sort o' forcible that I've seen you before." Then, with growing enthusiasm: "My, but that bull-fight was jest grand! You were fine! I'm right glad to know you, sir."

The caballero's face flushed with pleasure at her free-and-easy reception of him, while an almost inaudible "Gracias" fell from his lips. At once he knew that his first surmise, that the Girl was an American, had been correct. Not that his experience in life had furnished him with any parallel, for the Girl constituted a new and unique type. But he was well aware that no Spanish lady would have received the advances of a stranger in like fashion. It was inevitable, therefore, that for the moment he should contrast, and not wholly to her advantage, the Girl's unconventionality with the enforced reserve of the dulcineas who, custom decrees, may not be courted save in the presence of duennas. But the next instant he recalled that there were, in Sacramento, young women whose directness it would never do to mistake for boldness; and,—to his credit be it said,—he was quick to perceive that, however indifferent the Girl seemed to the customary formality of introduction, there was no suggestion of indelicacy about her. All that her frank and easy manner suggested was that she was a child of nature, spontaneous and untrammelled by the dictates of society, and normally and healthily at home in the company of the opposite sex.

"And she is even more beautiful than I supposed," was the thought that went through his mind.

And yet, the Girl was not beautiful, at least if judged by Spanish or Californian standards. Unlike most of their women, she was fair, and her type purely American. Her eyes of blue were lightly but clearly browed and abundantly fringed; her hair of burnished gold was luxuriant and wavy, and framed a face of singularly frank and happy expression, even though the features lacked regularity. But it was a face, so he told himself, that any man would trust,—a face that would make a man the better for looking at it,—a face which reflected a soul that no environment could make other than pure and spotless. And so there was, perhaps, a shade more of respect and a little less assurance in his manner when he asked:

"I love it! Ain't it romantic—an', my, what a fine time the girls there must have!"

The man laughed; the Girl's enthusiasm amused him.

"Have you had a fine trip so far?" he asked, for want of something better to say.

"Mercy, yes! This 'ere stage is a pokey ol' thing, but we've made not bad time, considerin'."

"I thought you were never going to get here!"

The Girl shot a coquettish glance at him.

"How did you know I was comin' on this 'ere stage?"

"I did not know,"—the stranger broke off and thought a moment. He may have been asking himself whether it were best for him to be as frank as she had been and admit his admiration for her; at last, encouraged perhaps by a look in the Girl's blue eyes, he ventured: "But I've been riding along this road every day since I saw you. I felt that I must see you again."

"You must like me powerful well…?" This remark, far from being a question, was accompanied with all the physiognomical evidences of an assertion.

The stranger shot a surprised glance at her, out of the corner of his eye. Then he admitted, in all truthfulness:

"Have you tried not to?" questioned the Girl, smiling in his face now, and enjoying in the full this stolen intimacy.

"How funny it seems, an' yet, p'r'aps not so strange after all. The boys—all my boys at the camp like me—I'm glad you do, too."

by Max Brand Gunman’s Reckoning is full of the twists, turns, action, drama and emotional turmoil that mark a great Western. Ma......