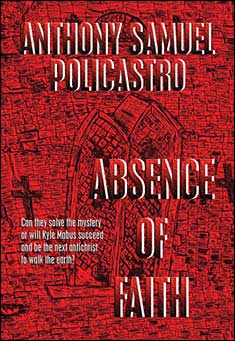 Absence of Faith is a medical mystery thriller.

After falling asleep and driving into a river, a doctor experiences one of the worst nightmares of his life. Knocked unconscious, the young intern has a negative near-death experience that is so realistic, so terrifying that he imagines he has died and gone to hell.

When other people living in the highly-religious small town of Ocean Village endure similar negative near-death experiences and wake up with burnt skin, they believe God has abandoned them.

When a Satanic cult emerges and begins to win over the town residents, matters start to get worse

Can the cult leader be stopped or will he destroy all known religions in the world? .

He was tired and looking forward to sleeping late the next morning. He and his wife, Linda, had just left an annual reunion with

his fellow classmates from medical school. They had become close and vowed to get together once a year to refresh their friendship no matter how far the winds of their careers had carried them. It seemed like only yesterday that they made that vow and now two years had slipped between that evening before graduation, and the night of this particular get together.

Carson and Linda approached the aging Red River Bridge; a forgotten wooden structure built in the 1920s and scheduled to be torn down in the summer. Carson enjoyed the clanking of the loose boards as the car went over them; Linda hated when he took this way home; she believed the bridge would collapse any day now and most likely it would be their car that caused the collapse. Below them, the river moved steadily marking their passage - a point in time captured like the click of a camera captures a split second of realty. Carson wondered what mysteries lay beneath the escaping, fouled water. He wondered how much history the river had seen - he knew that the river was old, very old. He knew that the river once flourished with crabs and oysters - the older men spoke of those days when they were children and the river teemed with edible sea life. It's hard to look at an old man and imagine that he was once a child - fresh, new and naive to the world heinhabited.

The river could have been here since the early beginnings of the earth, but today no one cared about such meaningless things. They regarded the river as a means to get out to the ocean or illegally dump unwanted chemicals or sewage. No one cared about the river - no one defended the river. His thoughts seemed to melt into others like a dream that progresses with random happenings all unrelated and all illogical.

The tiny orange light grew brighter as he was pulled downward at an ever-increasing speed. Shadows at the sides of the tunnel came to life and thrust out thin, spiny arms that grabbed at him. When the arms made contact, they were transparent and they transmitted an electrical- like pain through his skin that sliced his arms and legs into shredded raw flesh. He tried to avoid them but he couldn't. He fell faster and fear washed over him like the wind in his face as he thought of his impending doom. Suddenly he stopped falling as if he landed on a pillow of soft air. He was eased down on his back and he felt the back of his head sink into something soft, something familiar. He was in his bedroom lying in his bed, wondering how he got there. The curtains on the window were moving and he could see there was something outside pushing against the glass trying to get in. He tried to get up, but he couldn't feel his arms. The window shattered and a black entity resembling a long black scarf snaked into the room, stopped at the foot of the bed, and metamorphosed into a giant, angry dog with an over sized head and mouth. The dog jumped up on the bed and bit into Carson's left thigh violently shaking its head from side to side ripping the leg from Carson's body. Within seconds, the dog bit into Carson's other leg tearing it off with several quick turns of its violent head. Carson screamed in pain and tried desperately to move away kicking and pushing with a virgin terror that scared him more than the dog. The dog hovered over Carson its long pointy teeth dripping with Carson's blood and pieces of his skin and sinew. The beast opened its mouth wider and thrust its disfigured head towards Carson and Carson knew a new terror more intense, more frightening than all the others. This dog was familiar! Instantly, his mind reeled back to when houses were still being built in his neighborhood and he played in the wooded lot next door. The lot had a narrow dirt path that was well worn by all the neighborhood kids, and on this day, Carson, his friend Georgie, who lived across the street and tiny Sara from the house next door were on an adventure. The threesome walked down the path, Carson in the lead, Georgie behind him and Sara trailing when there was a rustling in the bush ahead. Suddenly, a large black dog appeared on the path with its teeth drawn and a low growl in its throat. A gold tag hung from its black collar ringed in silver studs. Sara immediately turned and ran screaming; Carson and Georgie stood there paralyzed in fear.

"Nice, doggie," Carson said putting up his hand and slowly backing away.

The growl intensified and turned into a loud bark and then the dog lunged towards Carson knocking him to the ground. Georgie ran as fast as he could, screaming and crying down the path. The dog bit into Carson's thigh and dragged him into the bush where it was hiding earlier. The dog released Carson, then bit into his foot, and violently shook its head back and forth. Carson kicked the dog in the head and the dog released his foot and then moved on top of Carson. He stood there a few seconds growling and spewing its hot, acrid breath onto Carson's face, its eyes filled with hatred and evil. Then the dog opened his mouth wider and moved towards Carson's neck. Carson screamed and pushed the dog's head away.

The dog's head flew to the left and the dog fell to the ground howling in pain. Carson looked up and saw the angry face of his father holding a baseball bat. The dog got up, shook its head and growled at Carson's dad. Carson's father hit the dog again on top of its head and it slumped down onto the ground whimpering. He hit the dog several times and the whimpering stopped. Carson only remembered riding in an ambulance and then waking up in the hospital, his mom and dad looking down at him his leg and foot in pain.