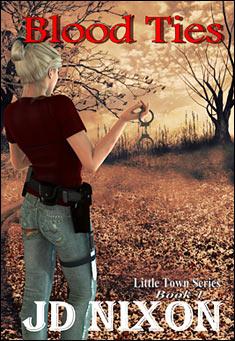 Police officer Tess Fuller has her hands full trying to maintain order in a poorly-resourced small mountain town overrun by the beautiful, arrogant and lawless Bycraft family. But what will her new sergeant, a serious by-the-books city cop, think of her renegade policing style? And will they be able to work together to save Tess' life when her feud with the Bycrafts escalates dangerously?

Residents of the small township nestled at the foot of Mount Big were shocked last week when two timber-getters stumbled over the body of Mrs Elizabeth Fuller, aged 21 years. The murdered woman was found in a paddock off to the side of the road leading to the township. It appeared that she had been outraged before being brutally beaten about the head with a large rock that was found in near proximity. Mrs Fuller, described by the townsfolk as a very comely woman, had been on her way to lend assistance to her husband's sister during her first confinement.

Suspicion for the heinous crime fell immediately on bullock driver, Mr Ned Bycraft, aged 30 years. He was seen by the timber-getters with bloodied hands running wildly from the paddock shortly before their most gruesome of discoveries. According to the timber-getters, Mr Bycraft had publicly threatened to do violent harm to Mrs Fuller on several occasions for rightly rejecting his insistent and unwanted attentions. The husband of the murdered woman, Mr Clem Fuller, also a timber-getter, had reportedly come to physical blows at least twice with Mr Bycraft over his unseemly behaviour towards Mrs Fuller.

An angry crowd of local men (one of whom is believed to have been Mr Fuller) ran Mr Bycraft to the ground before hanging him to his death from the branches of a nearby tree.

Constable Dougal Tighe from the Wattling Bay constabulary was ordered to the Mount Big township to investigate both deaths. But after receiving no co-operation

in his enquiries from the local townsfolk, Constable Tighe advised this reporter that there would be no further investigations undertaken into this matter.

Ned Bycraft's older brother, Mr Bill Bycraft, told this reporter that his brother was innocent of any crime and had actually himself been running for help after discovering Mrs Fuller's body when he was noticed by the two timber-getters. He further threatened that there would be a deadly reckoning on those responsible for killing his brother, particularly on the Fuller family.

Mr Fuller told this reporter that justice had been delivered for the dreadful outrage and murder of his wife and that he did not regret the circumstances of Mr Bycraft's death. He would not admit to being a participant in the lynching though.

Mrs Fuller was buried on Friday in a small but well-attended service. She is survived by her husband and two young children.

Mr Ned Bycraft is survived by a wife and seven children.

Robert John Bycraft (known as Bobby), 29, seasonal fruit-picker of Mount Big Town, was today found guilty and given a life sentence in the Supreme Court for the vicious murder of young mother, Leonie Mary Fuller, 24. Bycraft showed no emotion as Justice Leonard MacEnroe told the court that the murder was one of the most depraved crimes he had ever presided over in his twenty years on the bench.

Mrs Fuller was attacked in her house in Mount Big Town by Bycraft in June last year. She was half-strangled before being raped and stabbed repeatedly, with such savagery that the blade of the knife broke off inside her body.

Mrs Fuller's daughter, who was only two at the time, was also attacked during the violent crime, sustaining several serious knife wounds to her arms and torso.

Police believe that the young child may have witnessed her mother's brutal murder. The little girl was unconscious from blood loss when discovered by her distraught father. She was found lying underneath her parents' bed, where it is believed that Mrs Fuller pushed her to save her from the murderous frenzy. The court heard during the trial that Mrs Fuller suffered extensive defence wounds during the attack trying to protect her daughter and herself. Mrs Fuller was three months pregnant at the time of her death.

Mrs Fuller's friends and family, including her husband and parents, were in court for the sentencing and were abused by relatives of Bycraft, some of whom had to be forcibly removed from the courthouse by court security.

A spokesman for the Fuller family, Mr Abel Stormley, later thanked the Wattling Bay detectives for their relentless efforts to solve the crime and bring Bycraft to justice. The family also extended thanks to the community at Mount Big Town for their support during the family's traumatic experience.

Bycraft is expected to appeal his conviction.