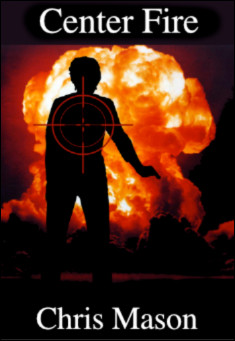 Carla is a ruthless ex-Mossad agent, once a rising star, who mysteriously walked away from a mission and vanished into the shadow world of mercenaries. She helps a notorious arms dealer, who's come out of retirement for one last score, steal three nuclear warheads from a missile base in Ukraine that's about to be decommissioned. But she has a private agenda that her comrades can't even begin to suspect.

When Carla breaks into the FBI office in Seattle to find a contact in the Witness Protection Program, she stumbles across Derek, a small-time thief who's pretending to hack into the FBI's computer system for the Mob, but is actually helping the FBI to entrap them. She forces him to help her and then kidnaps him.

Everything starts to unravel when Derek doesn't show up for his appointments with either side. Before you can say "double-cross," Carla and Derek are being chased by the FBI, the CIA, the Mafia, vengeful arms dealers, and the Mossad assassins that have been trying to take Carla down for over a year.

The spree of kidnappings, tricks, betrayals, gunfights, near-misses, car chases, and helicopter stunts ranges all over the Northwest into Canada. Their only hope for survival, and to stop the warheads from falling into the wrong hands, is to find a way to turn the chase around and become the hunters instead of the hunted.

Throughout the chaos of narrow escapes, explosions, and flying bullets, only one person has any understanding of what's really happening or any hope of preventing the nuclear terrorism she's helped unleash: the unstoppable Carla.

A bitter wind slashed down from the mountains looming over the missile site. Philippe Sottile shivered and turned his back to the snow that stung like sand. Once more he pulled up the collar of his fur coat, but it wasn’t enough; he was freezing. He felt an overwhelming yearning for his villa on the Côte d’Azur—drenched in warm sunshine, looking out over the calm blue waters of the Gulf de St. Tropez with a willing girl leaning on his arm—but he fought it down.

Glare from the security lights flooded the compound, banishing the night even though half of the lamps were burnt out, perhaps never to be replaced. The Ukrainians were even poorer now than when they had been part of the Soviet Union. There were only four miserable structures in the complex, all built of rusted, corrugated steel: a small control shack, a barracks, a garage and tool shed, and an outhouse-sized hut for the electrical generator.

Eight squat concrete pillboxes were spaced evenly in a ring around the buildings, surrounded by an electrified fence topped with razor wire. The launch tubes rose only a meter or so above the snow-covered ground; the missiles stood vertically well below the surface. Each launcher carried six MIRVs, each of which was powerful enough to destroy a small city, and that thought was enough to warm Philippe’s heart so that he momentarily forgot the bitter cold.

The doors of one of the launch tubes were drawn back, exposing a shaft leading down into the earth. Philippe tried to lean over to see what was happening, but he could see only the smooth wall of the tube. He sighed and pulled himself up to kneel on the gently sloping concrete rim. It was rough and intensely cold under his knees.

Five meters below him, Jensen and the Ukrainian sergeant were standing on a retractable steel grid, suspended above a void, their heads close together as they worked to remove a third warhead from the launcher. Two others had already been loaded into their crates and replaced with dummies. Below the men, the tube extended down perhaps fifty meters, most of its volume filled by the rocket. The launcher’s nose cone had been removed, exposing four real MIRVs and the two identical dummies, standing vertically like lethal pencil-tips.

Jensen looked up. Sweat shone on his black face and ran down into his beard. How could they could possibly be hot down there when it’s thirty below up here?

“What?” Jensen yelled back. He wiped his face with the back of his hand.

Jensen gestured rudely without speaking and went back to his work. Perhaps it was not heat that made Jensen sweat; perhaps it was the fact that he was dismantling a nuclear weapon. Interesting: Philippe had never seen Jensen nervous before.

A few minutes later the sergeant bellowed something incomprehensible. A private ran up and leaned over the edge of the tube. The sergeant yelled again, and the soldier ran off to the small crane, drove it forward and lowered a cradle down toward the missile. Within the cradle—a web of steel tubes and nylon straps—was an exact replica of one of the warheads, an orange-tipped gray cone about two meters in length. It looked just like the originals, but it was almost entirely hollow. Instead of propellant, control circuits, and a nuclear bomb, it contained only a few circuit boards cannibalized from a video game, whose sole function was to report that the warhead was operational.

by Peter C Byrnes Across Australia, one woman dies every week at the hands of a spouse, ex-spouse, friend, or a lover/former lover…......