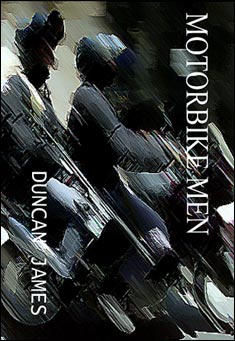 One of Britain's top particle physicists, Jack Barclay, is on the verge of a major breakthrough in developing the nuclear fusion process into a clean and sustainable alternative to carbon fuels. News of this spreads round the world causing great interest in most nations but grave concern in Russia. When other countries, including America, seek collaboration to help speed his work, Russia determines to put an end to Barclay's research at the Harwell and Culham laboratories.

As a top-secret British intelligence agency is tasked with protecting Barclay, one of Russia's top KGB agents is sent to arrange his assassination. The twists and turns of the action-packed plot take us, with the intelligence agency's team, from England's nuclear research laboratories to a final, bloody, gunfight in the Swiss Alps.

Jack Barclay had never been a very good-looking man, which was probably why marriage had passed him by. His lively personality wasn't enough for most women looking to the future, although he had enjoyed his share of girl friends in the past. But nothing approaching a lasting relationship had ever materialised.

Some women had felt sorry for him, probably because he appealed to their mothering instinct in some peculiar way. He had not been blessed with good looks at birth, and life had done nothing to improve things for the poor man. He had a horrendous scar across his forehead and through one eyebrow, the result of

'something-or-other in the Army' - nobody was quite sure, because he had never said.

It was actually an accident at school, when he and his twin brother both fell off the same bicycle they were riding while going too fast down hill. His brother had collected a very similar scar, oddly enough. There wasn't a lot of Jack's nose left, either, thanks to many an opposition boot on the rugby field. Neither had his two front teeth ever really straightened out after his head-on smash on the ice with a fellow who could skate rather well, while Jack was still trying to stay upright. In time, though, he became an excellent skier.

And he was on the short side of being tall. Vertically deprived, he called it. For some, five foot seven would have been enough, but although he never actually complained about it, the fact was that most women, and almost all other men, made him feel as if he was standing in a hole.

So, as an up-shot of all this, he lived on his own, most recently in a second-floor flat in Battersea, which he had bought as a London bolt-hole when he felt he really had to get away from the pressures of his research work in Oxfordshire, where he lived in digs. The Battersea flat did not have a bad outlook across the park, and he could see the bridge if he leant over his balcony. That, in turn, provided him with more than enough gardening, all of it in pots. He kept the apartment clean and tidy, and mostly cooked for himself when he was there. He enjoyed that, and didn't often eat out anywhere unless he was abroad on business or away from home for some other reason. He was no bother to his neighbours, so they said, but this was not altogether surprising as he was rarely there.

He had never got on with his brother. Even though they were identical twins, they were as different as chalk from cheese. Jack had done well at school, and his brother Roger hadn't. Roger appeared not to care about learning anything worthwhile, and never made the slightest effort. Which was why, quite early on at Grammar School, they had been separated into different classes. Brother Roger was not the least impressed by the efforts and achievements of his twin, although the school's teachers had thought that a bit of peer pressure, especially from a twin brother, might spur him into making something of an effort, if only for the sake of appearances. But that theory didn't work, and he hadn't even tried to do well - at anything. He had never shown the slightest interest in sport, although he was required, unless he really was ill, to play 'rough and muddy rugby' during the winter, and 'boring cricket' in the summer. Roger's scholarly brother, Jack, on the other hand, had represented the school at cricket, rugby and, later badminton, too. A fellow classmate had once managed to break Roger's nose during a particularly awful game of rugby, and an opposition batsman had square-cut a ball at cricket one Wednesday afternoon and loosened two of Roger's front teeth for him while he had been thinking of something else. All of which resulted in he and his brother continuing to look like two peas in a pod.

The plain fact of the matter was that Roger had simply idled his way through every aspect of school life, and couldn't leave soon enough - a view eventually shared by his headmaster. The brothers were certainly not identical twins, except in appearance. Had they been closer, they could have played havoc everywhere they went. But they chose to keep their distance from one another, and the older they got, the greater became the distance between them.

So, it was no great surprise to their parents, although an ongoing disappointment until the day they died, when Roger Barclay had joined the local bank as a junior clerk, without even waiting for his 'O' level results. In the event, they were as disappointing as everyone expected, and not worth waiting for anyway.

Brother Jack, meanwhile, had gone up to Oxford, done remarkably well, and continued to succeed in his chosen career as a mathematician and research scientist in particle physics. His reputation went before him, and his services were soon in demand. Oxford wanted him to stay on to tutor after he had achieved his doctorate, and the Americans were even now trying to entice him to work for them. But he had elected to stay in the UK, and to work for the Atomic Energy Authority, although he had rejected approaches to help develop new and ever more devastating weapons. He was convinced that the power of the atom should be put to the future good of mankind, and harnessed to generate the energy that the world's fast-growing population would need in order to survive.

Which is how Professor Jack Barclay came to be a key figure in the development of nuclear energy as a replacement for fossil fuels. His research efforts were closely watched around the world - sometimes too closely for his own comfort.

He preferred not to be in the limelight, but to work quietly with a few chosen colleagues at the purpose-built research laboratory at Culham, towards their ultimate goal of achieving sustainable nuclear fusion.

Fusion power offered an almost limitless source of energy for the future once the formidable scientific and engineering problems surrounding its development were overcome. Because of this potential, every major nation in the world pursued its own research programme to some extent, in a commercially competitive effort to achieve the Holy Grail of meeting the fast-growing universal demand for energy. But in spite of this, there was also a great deal of international co-operation, particularly among scientists, even if this was not shared between politicians. Harnessing nuclear fusion would answer the world's insatiable demand for energy without contributing to global warming, and without producing massive amounts of radioactive waste. What waste there was, quickly decayed. Hydrogen was its main fuel - the most commonly available natural gas in the universe.

To make this dream of endless power a commercial reality meant engineering the fusion together of such nuclei as hydrogen isotopes so as to release energy, rather than the easier technique of splitting atoms in nuclear fission, the process used for weapons. The fusion process is similar to that which takes place in the sun and other stars, and requires similar exceptionally high temperatures. Energy-producing fusions need gas from a combination of the hydrogen isotopes deuterium and tritium to be heated to some one hundred million degrees centigrade and to be confined for about a second. During this time, the plasma of electrons and hydrogen interact to fuse into helium, and some of their mass is destroyed, releasing huge amounts of energy in the form of heat, light and radiation. Such fusions had been carried out in laboratories for many years, but only of very short durations. Confinement for longer periods would result in a controllable, continuous reaction, which generated more energy than it used.

Professor Jack Barclay had set that as his goal.

Previous work had suggested that the use of magnetic confinement of the gas was the most promising in achieving a continuous 'burn', although, thanks largely to Barclay's work, research to achieve the same objective using lasers was now well advanced. Although he was one of a team, his incisive brain and sound theoretical approach gave him prominence among his peer group. Barclay reasoned that using lasers would provide the ability to maintain a steady flow of fusion blasts, taking research closer to the continuous system needed for commercial power generation. It was his work that lead to the formation of the High Power Laser Programme at the Rutherford Appleton Laboratory at Harwell, in which he now played a leading role.

This aspect of his research was considered so important that very little of it was made public knowledge, even within the scientific communities of cooperating countries.

Although limited and lacking in detail, news of his new research work had somehow got out, and had caught the public imagination through the popular press, as well as exciting fellow researchers round the world. They constantly demanded the publication of learned papers and his presence at conferences to expand on his new theories, but he was a diminutive man, who, probably because of his stature, disliked the attention of others and certainly hated speaking in public, even at seminars about his chosen subject. But the media had more than once given him and his work unwanted and unwelcome publicity, so that he was now quite well known generally as well as in the very specialised world of nuclear physics. It was his most recent work in developing the theory of laser confinement of the hydrogen plasma that was exciting most interest, particularly in America, the Middle East and Russia. It soon became evident from the level of their interest that Barclay's work had put the UK

well ahead of other countries in this most-promising aspect of the nuclear fusion race.

And that brought with it particular dangers. Not just for him, either. Neither of them knew it at the time, but Jack's success was to prove to be the death of his brother Roger.