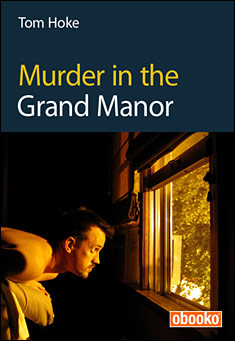 Murder in the Grand Manor
By Tom Hoke

When a Chicago detective follows a lead to San Antonio, Texas, his world is turned topsey turvey when his seemingly simple case mushrooms into a wild combination of murder, romance, and a gulf coast hurricane.

Jim Smith knew this was going to be a memorable trip when his headlights picked out the figure of a woman talking animatedly to a palmetto during a driving rain storm. Peering through the blur of water on his windshield, he found himself staring at gold opera pumps, a dripping outer garment of some shiny material hanging nearly to the ground, and two hats stuck squarely one upon the other on her head. Suddenly she turned, waved a gloved fist at his lights, and disappeared around the left side of the building.

In disbelief, he nosed the rental car closer to the looming building and a neon sign spelled out G R A D M A O R, with enough space to allow for the true name, which according to his directions, could only be Grand Manor. Three stories high, all but obscured by dark, wet foliage, the hotel appeared scarcely grand and by no means a manor.

The attendant in the gas station back up the road had warned him. The attendant had showed some surprise when Jim asked how to find the Grand Manor Hotel. "That place is dead, even if it's still running. You won't like it." He started talking about a new casino hotel. "Look", Jim cut him off, "I want the Grand Manor. You DO know where it is?" Out of sheer curiosity, Jim added, "What's the matter with the Grand Manor?"

The attendant shrugged. "It used to be the town meeting place a few years ago. Everybody stopped at the bar sometime during the day. A guy always knew what was going on in town then. You know, Rotary Club, Lion's Club, and Garden Club luncheons, that sort of thing. And the bar always had at least a dozen people in it." He shook his head. "They put in a new bridge and a higher road separating the town from the old hotel. I guess that was the end. Nobody goes there no more."

Then he waxed philosophical, "The town fell apart in a way. Since it got divorced from the Grand Manor, Bay St. Louis ain't the same, just a bunch of houses scattered around. Without a central meeting place, there's nothing to hold the town together." He looked at Jim curiously. "You got a friend staying there?" he asked.

Jim turned up his raincoat collar. "No," he said quite truthfully. "I don't have a friend staying there." Jerry Duprey was no friend of his, especially after this morning. However, a thousand bucks said he had to find Duprey and take him back to Fort Worth, Texas. Most of all, he wanted a word or two with Jerry Duprey.

Jim took a deep breath and slammed the car door as he ran for the unappealing entrance, shoes crunching on the crushed shell of the driveway. A single naked street light threw waving shadows of heavy Spanish moss in continuous motion across the face of the building. A wet strand dangling eerily from a long branch of an enormous live oak tree brushed his head. Ancient the Grand Manor might be, but dry it looked, and nothing else mattered at the moment.