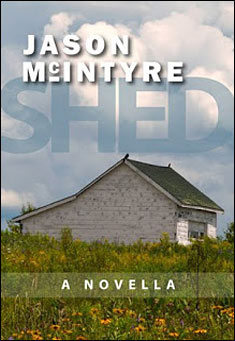 Simon and Rupert spend their days playing in the fields out near the old power station but at night, a visitor comes for them. Older brother Simon shoulders the burden of their stepfather Everett and his greedy dominion over their Mama. But the brothers must now stand together to heal the wounds of their real father's departure and brace themselves for a harrowing showdown with Everett.

Simon and I lay in the dark, peering into the blackness of the basement around us. My eyes were opened wide but I couldn't even make out the lines on the wallboard or the doorway at the foot of the bed. The heat of the day had surrendered and it was cool there in the quiet beneath the earth. I had to hold my breath at times to stop from shivering. There was a small square of hazy, barely visible light coming from behind the window above us but it offered almost no illumination at all. I looked up and imagined the street lamp that stood way down at the end of the drive. Its light was blurred out by the tall weeping willows and the enormous distance between the house and the road.

What was to go on down here was beyond that world on the other side of those trees -- beyond the light itself -- and I wished at that moment that those trees were not there so I could see my brother's face and know what he was thinking. We were both there in that darkness, stripped down to our underwear, laying still on the mattress side by side saying nothing and breathing shallowly. There was only one sheet on the bed and we lay on top of it. Here on the island during the summer, it gets hot but it is substantially cooler down here, especially at night. I don't know whether it was the night air of the basement pressing in on me or just the waiting but I simply couldn't help it any longer; I finally began to shiver.

I looked up to my older brother as little brothers often do. I always had. What he said I didn't question. He didn't tell me why we were laying there on a bare sheet with all the other blankets pushed off into the corner of the room. And even though we were laying there in the pitch dark with scarcely a thread of clothing on, I didn't ask once. I just trusted him.

My memories of my big brother during that time are so clear, even now. Simon was a quiet, unassuming boy. That much was obvious to everyone in town, to everyone at school, to Mama, and even to me. He never felt the need to make his thoughts known to

anyone who didn't want to hear them and he never spoke out of turn. At least, he tried not to after Mama married Everett.

It never really surprised me that my brother was so quiet. I never thought much of it. After Daddy died, we both had little to say, even to each other. Mama started seeing Everett and he was around pretty much all the time starting about two years before Simon began seventh grade. Simon and I hated him from the start.

Everett worked at Ethan's Shop near the docks. He was a hull welder, an odds n' sods man. Whenever boats came in needing hulls patched or equipment re-soldered to decks after a storm Everett was called in for double shifts. Fishing was the lifeblood for most everybody on the island in the late seventies and the fisheries were the heart's blood of our little community, bringing in as many loads as they could. Every other service and industry was secondary in those days and as a result anyone tied to the boats and lobster trawlers -- and the men who worked them -- was regarded almost as a local hero. Everett, by association I suppose, was highly respected for his work, even if he was somewhat lazy. Simon and I didn't understand what everyone saw in him. We didn't really get the silent respect he garnered from the town, but we accepted him as best we could, since he was to be our new dad.

I guess it was the idea of a regular paycheck, at least for our mama, that made him seem appealing. When he proposed marriage to her he promised Mama that she and her two boys would never go hungry and he told her that he loved her more than any man ever could.

But that wasn't true. Our daddy loved Mama, loved her more than life itself and more than Everett ever would. Daddy had been an electrician, his father one before him, and between the two of them they had installed almost every power box and length of wire on the island since early 1942. Daddy took on the family business after granddaddy's death which was a few years before I was even born; he eked out a living for us by taking care of whatever electrical services were needed on the island. Mama arrived from the mainland in 1965 fresh from high school for a job at the newspaper as a typesetter. Her uncle was a newspaper man and had known Edwin Barstow, the editor of 'The Island Press', for some time. She'd had a strong leaning towards books and writing ever since she was a child and seemed a natural at the newspaper. She had even hoped of becoming a respected reporter someday just as her father had been. The two of them, my daddy and my mama, met at Harlow's Grocery on Main Street her first week in town when they both reached for the same filet in the cooler by the checkout.

They both laughed at the absurdity and their romance began that summer. Soon they dashed off to the mainland, scooting around the country in a little brown and white bowler trailer towed behind Granddaddy's old Buick. Mama's eyes used to light up when she'd tell Simon and me that story and we loved listening every single time she told it.

Theirs was one of those movie loves, one of those unbreakable ones that you know will never burn out. I knew it even then, even when I was just a little kid. So, what Everett told her wasn't true. Although I can understand why she might have believed it to be at the time. He was awfully sincere for those first few months. And after Daddy had died she was in dire straits, I'll tell you that much. She didn't have any idea how she was going to make the payments on the small house that Daddy and her had bought before Simon was born. And keep us fed by herself. She was sick with

worry and sick with sorrow. The paper had closed down some years before, was replaced by a mainland gazette which was shipped over by boat in the afternoons, and our Mama had no experience in any other line of work. Other than cooking and cleaning, she had no other skills. And, with most everyone at bare wages from shipping and the fishing boats, scarcely anyone at all could afford to hire a cleaning lady. Along came Everett with his shined boots, slicked back hair, some flowers picked out of the neighbor's garden, and his regular paycheck from Ethan's. I guess that was almost all she needed.

by Peter C Byrnes Across Australia, one woman dies every week at the hands of a spouse, ex-spouse, friend, or a lover/former lover…......