jQuery is a JavaScript library designed to simplify HTML DOM tree traversal and manipulation, as well as event handling, CSS animation, and Ajax. It is free, open-source software using the permissive MIT License. Web analysis indicates that it is the most widely deployed JavaScript library by a large margin.

jQuery's syntax is designed to make it easier to navigate a document, select DOM elements, create animations, handle events, and develop Ajax applications. jQuery also provides capabilities for developers to create plug-ins on top of the JavaScript library. This enables developers to create abstractions for low-level interaction and animation, advanced effects and high-level, themeable widgets. The modular approach to the jQuery library allows the creation of powerful dynamic web pages and Web applications.

The set of jQuery core features—DOM element selections, traversal and manipulation—enabled by its selector engine (named "Sizzle" from v1.3), created a new "programming style", fusing algorithms and DOM data structures. This style influenced the architecture of other JavaScript frameworks like YUI v3 and Dojo, later stimulating the creation of the standard Selectors API.

Microsoft and Nokia bundle jQuery on their platforms. Microsoft includes it with Visual Studio for use within Microsoft's ASP.NET AJAX and ASP.NET MVC frameworks while Nokia has integrated it into the Web Run-Time widget development platform.

jQuery, at its core, is a Document Object Model (DOM) manipulation library. The DOM is a tree-structure representation of all the elements of a Web page. jQuery simplifies the syntax for finding, selecting, and manipulating these DOM elements. For example, jQuery can be used for finding an element in the document with a certain property (e.g. all elements with an h1 tag), changing one or more of its attributes (e.g. color, visibility), or making it respond to an event (e.g. a mouse click).

jQuery also provides a paradigm for event handling that goes beyond basic DOM element selection and manipulation. The event assignment and the event callback function definition are done in a single step in a single location in the code. jQuery also aims to incorporate other highly used JavaScript functionality (e.g. fade ins and fade outs when hiding elements, animations by manipulating CSS properties).

The principles of developing with jQuery are:

jQuery's architecture allows developers to create plug-in code to extend its function. There are thousands of jQuery plug-ins available on the Web that cover a range of functions, such as Ajax helpers, Web services, datagrids, dynamic lists, XML and XSLT tools, drag and drop, events, cookie handling, and modal windows.

An important source of jQuery plug-ins is the plugins subdomain of the jQuery Project website. The plugins in this subdomain, however, were accidentally deleted in December 2011 in an attempt to rid the site of spam. The new site is a GitHub-hosted repository, which required developers to resubmit their plugins and to conform to new submission requirements. jQuery provides a "Learning Center" that can help users understand JavaScript and get started developing jQuery plugins. 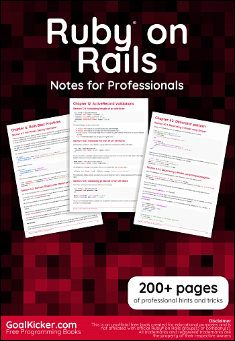 Ruby on Rails Hints and Tips for Professionals

by Peter Ranieri Over 200 pages. Subjects covered include: Getting started with Ruby on Rails Routing ActiveRecord Views Ac......