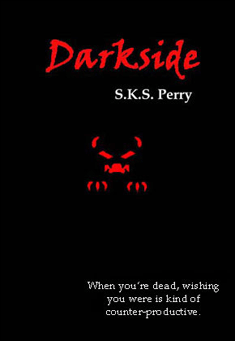 James Decker just won't stay dead. Slain while rescuing a young woman from a would-be rapist, he finds himself in a pseudo-life, caught between two realities, belonging to neither.

Haunted by the ghosts of his father and grandfather, he learns that the woman he rescued is in fact an Innocent, the physical embodiment of hope. As it turns out, seeing dead people is the least of James' worries. It's the trolls, goblins, vampires, and other assorted creepy-crawlies that make being dead a living nightmare.

When a Madness Demon kidnaps the Innocent to sacrifice at the Blood Moon ritual, it's up to James and an odd assortment of Otherworld companions to rescue her. If they fail, humanity will be without hope for the next thousand years ...

All right, let me just start by saying that I don't drink or do drugs. Ever. I suppose nowadays that statement alone is enough to label me peculiar, or a liar, or both, but it's true. If you have any trouble getting your mind around that, then you might as well stop listening right now, because it only gets worse.

Is this thing on? The little needle's jumping around in the green, so I guess it is. Okay, where do I

First off, I am not a vampire. I freaking hate vampires, always whining about how they'll never see

another sunset. I've got a friend who's been blind since birth and he's never seen a ******** thing, so don't whine to me about no freaking sunsets. And I'm not a shapeshifter either, though most of them aren't half-bad, just a little irresponsible. No, basically what I am is someone who was just too damn ornery--or stupid, depending on who you ask--to die. Have I lost you yet? Cool, then listen up.

Everything hit the fan about three weeks ago. I was just loading some groceries into my trunk after a little late-night shopping at the 7-11, when I heard this woman scream. I probably should have minded my own business, but I think you'll figure out that I rarely do if you listen to enough of this little tale. Besides, my mom just didn't bring me up that way.

Anyway, there was this white guy off to my left--a real white-trash-looking creep--and he was roughing up this preppie-looking black girl. The both of them were partially hidden behind a rusted-out black Ford Bronco. He had her pinned against it, and I could tell he was going to hit her--again.

I sauntered over to their side of the truck--well, it looked like a saunter, but I can move pretty quickly without it looking like I am--and caught the creep by the shoulder. The girl's eyes widened as I slammed him face-first up against the Ford, then yanked him back and sent him sprawling to the pavement. She seemed to be okay, just a little bruising on her cheek where he'd hit her, so I turned my attention back to the creep.

Now I'm not much to look at--I'm only about five foot seven--but I'm really broad shouldered, and my friends say I've got this evil-looking mug, especially when I'm pissed. Apparently I looked nasty enough that the creep figured he couldn't handle me without the .45 he whipped out from inside his vest. He scrambled away from me a bit until he figured it was safe enough to get to his feet, then covered me with the gun, holding it out at that ninety-degree angle that always looks so cool in the movies. It just proved to me that he didn't know what he was doing.

That should have scared me. There's nothing worse than a weapon in the hands of someone who doesn't know what they're doing, but think they do. People get shot that way. I did. The only thing worse than people like him is people like me. You know, someone who doesn't know enough to be scared and shut their mouth when there's a gun pointed at their head.

The creep was tall and lanky, mostly bone, and wore faded denims, cowboy boots, a Marilyn Manson T-shirt with the sleeves ripped off, and the black leather vest. It looked like someone had tried to tattoo a rebel flag on his left deltoid with an Etch A Sketch. "Ya shoulda just minded yer own business, dude. Me and the piece were right in the middle 'a negotiations."

I looked over at the girl still huddled against the Ford. I don't know why, but I just knew she wasn't a working girl. There was this innocence about her--yeah, I know, it sounds clich?, but you had to see her to know what I'm talking about. I mean, some of these girls, they act all innocent--it's part of the allure--but this one wasn't faking it. I wasn't about to leave her to this creep.

"Listen you anorexic rat *******, why don't you leave us alone and go get a sandwich or something?

I'm sure there must be a KKKFC open somewhere."

He grinned then, all teeth and cheekbones, and that's when I noticed his eyes. The pupils were dilated, and I knew he was strung out on something. For a second there I was worried, but the puke didn't give me time to get really scared.

It's funny. The girl screamed. I heard the bang, much louder than it should have been, almost like a howitzer. I saw the flash, and the smoke. I even saw the shell casing eject. I never saw the bullet. I'm not even sure I really felt it. All I remember is thinking, "That scrawny ******* shot me!"

The round caught me clean, dead center of the chest. The impact slammed me back into the Bronco. My head snapped forward so that my chin touched my breastbone, and I glared up at the shooter through hooded eyes. I staggered forward a step, then shook my head roughly from side to side. The creep stepped back, bumped a light post, and let go another wild shot that didn't come anywhere near me. All I wanted to do was get my hands around his scruffy neck. It never occurred to me that I was supposed to be dead. I reached out for him and he pumped off another couple of rounds, but by now he was totally unnerved and he threw the

.45 at me and turned and hightailed it out of there.

I turned to the girl, but she'd passed out. Well, I could hardly blame her. I stepped over to the Bronco, leaned my back up against it, and slid down into a sitting position with my legs straight out in front of me. The front of my shirt was soaked with blood, but I undid the first couple of buttons and opened it up anyway. Call me a *********. I'm not going to lie and say the hole was big enough to see through, but it was big, and there wasn't anywhere near enough blood.

Maybe it's just the shock, I thought. You know how sometimes they say you don't feel something right away because of the excitement and the stress and all. But who was I kidding--a hole that big? I tried to take my pulse. I do it all the time when I'm jogging, but this time? Zilch, zero, nada.

That's when I saw the troll. At least I think it was a troll; it could have been a gremlin, or a boggle, or even a goblin. I'm not really up on that sort of thing, but I'm learning.

"Hey pal, got a light?" he says. He was standing maybe three feet away from me--all eyes and teeth.

I fumbled in my jacket pocket for my lighter. I don't smoke, but it was a present from an old girlfriend, and you never know when one is going to come in handy. Like then, for instance.

He took the lighter and blinked at me with those enormous, forest-green eyes that took up the whole top two-thirds of his face, then pulled a fat, smelly cigar out of the patchwork jacket he wore. He crammed the cigar into this huge slit of a mouth that accounted for the last third of his mug, and puffed until he had the thing lit. 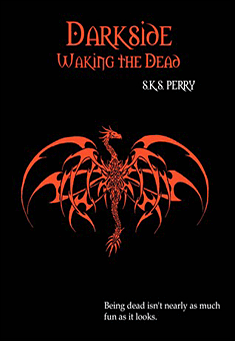 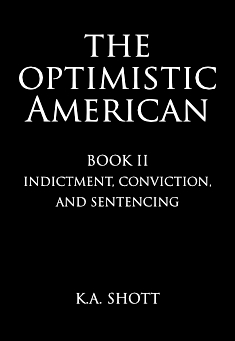 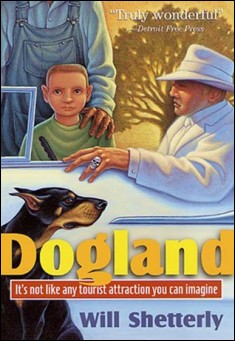