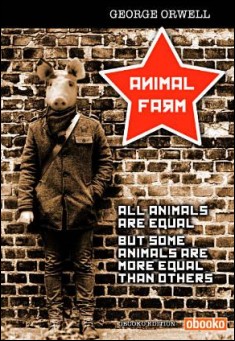 This classic book tells the story of a group of farm animals who rebel against their human farmer, hoping to create a society where the animals can be equal, free, and happy. Ultimately, however, the rebellion is betrayed and the farm ends up in a state as bad as it was before, under the dictatorship of a pig named Napoleon.

According to the author, Animal Farm reflects events leading up to the Russian Revolution of 1917 and then on into the Stalinist era of the Soviet Union. Orwell, a democratic socialist, was a critic of Joseph Stalin and hostile to Moscow-directed Stalinism, an attitude that was critically shaped by his experiences during the Spanish Civil War. The Soviet Union, he believed, had become a brutal dictatorship, built upon a cult of personality and enforced by a reign of terror. In a letter to Yvonne Davet, Orwell described Animal Farm as a satirical tale against Stalin ("un conte satirique contre Staline"), and in his essay "Why I Write" (1946), wrote that Animal Farm was the first book in which he tried, with full consciousness of what he was doing, "to fuse political purpose and artistic purpose into one whole".

Source and for more information: Wikipedia

MR. JONES, of the Manor Farm, had locked the hen−houses for the night, but was too drunk to remember to shut the popholes. With the ring of light from his lantern dancing from side to side, he lurched across the yard, kicked off his boots at the back door, drew himself a last glass of beer from the barrel in the scullery, and made his way up to bed, where Mrs. Jones was already snoring.

As soon as the light in the bedroom went out there was a stirring and a fluttering all through the farm buildings. Word had gone round during the day that old Major, the prize Middle White boar, had had a strange dream on the previous night and wished to communicate it to the other animals. It had been agreed that they should all meet in the big barn as soon as Mr. Jones was safely out of the way. Old Major (so he was always called, though the name under which he had been exhibited was Willingdon Beauty) was so highly regarded on the farm that everyone was quite ready to lose an hour's sleep in order to hear what he had to say.

At one end of the big barn, on a sort of raised platform, Major was already ensconced on his bed of straw, under a lantern which hung from a beam. He was twelve years old and had lately grown rather stout, but he was still a majestic−looking pig, with a wise and benevolent appearance in spite of the fact that his tushes had never been cut. Before long the other animals began to arrive and make themselves comfortable after their different fashions. First came the three dogs, Bluebell, Jessie, and Pincher, and then the pigs, who settled down in the straw immediately in front of the platform. The hens perched themselves on the window−sills, the pigeons fluttered up to the rafters, the sheep and cows lay down behind the pigs and began to chew the cud. The two cart−horses, Boxer and Clover, came in together, walking very slowly and setting down their vast hairy hoofs with great care lest there should be some small animal concealed in the straw. Clover was a stout motherly mare approaching middle life, who had never quite got her figure back after her fourth foal.

Boxer was an enormous beast, nearly eighteen hands high, and as strong as any two ordinary horses put together. A white stripe down his nose gave him a somewhat stupid appearance, and in fact he was not of first−rate intelligence, but he was universally respected for his steadiness of character and tremendous powers of work. After the horses came Muriel, the white goat, and Benjamin, the donkey. Benjamin was the oldest animal on the farm, and the worst tempered. He seldom talked, and when he did, it was usually to make some cynical remark−for instance, he would say that God had given him a tail to keep the flies off, but that he would sooner have had no tail and no flies. Alone among the animals on the farm he never laughed. If asked why, he would say that he saw nothing to laugh at. Nevertheless, without openly admitting it, he was devoted to Boxer; the two of them usually spent their Sundays together in the small paddock beyond the orchard, grazing side by side and never speaking.

The two horses had just lain down when a brood of ducklings, which had lost their mother, filed into the barn, cheeping feebly and wandering from side to side to find some place where they would not be trodden on. Clover made a sort of wall round them with her great foreleg, and the ducklings nestled down inside it and promptly fell asleep. At the last moment Mollie, the foolish, pretty white mare who drew Mr. Jones's trap, came mincing daintily in, chewing at a lump of sugar. She took a place near the front and began flirting her white mane, hoping to draw attention to the red ribbons it was plaited with. Last of all came the cat, who looked round, as usual, for the warmest place, and finally squeezed herself in between Boxer and Clover; there she purred contentedly throughout Major's speech without listening to a word of what he was saying.

All the animals were now present except Moses, the tame raven, who slept on a perch behind the back door.
When Major saw that they had all made themselves comfortable and were waiting attentively, he cleared his throat and began:

"Comrades, you have heard already about the strange dream that I had last night. But I will come to the dream later. I have something else to say first. I do not think, comrades, that I shall be with you for many months longer, and before I die, I feel it my duty to pass on to you such wisdom as I have acquired. I have had a long life, I have had much time for thought as I lay alone in my stall, and I think I may say that I understand the nature of life on this earth as well as any animal now living. It is about this that I wish to speak to you.

by David M. Antonelli Thurston is an American working as a lecturer in Brighton. His life is thrown into turmoil when his lover mysteriously v......