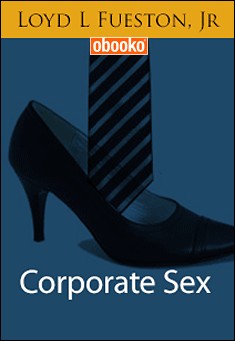 Corporate Sex was named Unleashed Desires when I submitted it to publishers and agents about five years ago. It is about the mating rituals and forms of reproduction that take place in the New York City financial districts.

Mary Pride was standing at the entrance of her cubicle when she caught movement out of the corner of her right eye. Looking up, she saw Jake Preskile striding towards her. He quickly drew close to her, a grim and determined expression upon that face which had always struck Mary as being so lean and hungry. His hand started to go up in a wave but he quickly dropped it in response to. . . a laugh. Mary realized she had laughed, not in a malicious manner, but in the way she’d often laughed at her father when he had stiﬄy crumbled to her side to work on a jigsaw puzzle or a picture to be colored.

Jake came up to within a couple of feet of her and smiled as smoothly as Mary would have expected, though she really didn’t know him well at all. She’d probably only exchanged a few sentences with him in the entire three years she’d been working at CMBG in New York. And she’d never had a desire for more communication, of any sort, with him. He was a symbol of much that left her weary and discouraged her with her present life. He was a man who seemed at home and even quite happy in the corporate environment.

And then Mary told herself she barely knew Jake and it might well be unfair to consider him to be a well-adapted corporate animal. . .

“Mary,” and she heard him speak in a pleasant voice, leaving her feeling still more suspicious. Why was he here? Why would an ambitious creature of the ﬁnancial world waste his time in the Personnel Department? He looked at her strangely and she wondered if her mask was down, if she were showing her distrust and dislike, and she told herself it wasn’t fair to make this ﬂesh-and-blood man into a symbol of all that she disliked about her life and about her environment. The puzzlement was still showing in the wrinkles of concentration about his eyes, but Jake went on to say, “Mr Thornsby and I were talking about the tight schedule we’ll be on with,” and he looked about before adding, “the acquisition we’ll be talking about in the meeting upstairs. When I showed him the schedule I’d put together, he told me it puts a burden on you. So I came down here to talk to you quickly before the meeting.” He looked at his watch and then back at her, his face showing once more nothing but calm ambition and conﬁdent intensity. There was a hard tint to the baby-blue of his eyes, there was a hardness about the very placement of his prominently hooked nose. His chin was ﬁrm in a manner that Mary found displeasing, that is, in conjunction with the entire package.

She motioned down the hallway a short ways. “We can talk in the conference room, behind closed doors. I was leaving to run a couple of personal errands before heading up to the meeting.”

A smile appeared upon Jake’s face, a smile that veered close to being attractively pleasant, a smile that distracted Mary for just a heart-beat before she took a step towards the conference room. Jake didn’t move, and he grinned before she was able to maneuver around him. “Didn’t anyone tell you that the personal life is dead in this brave, new corporate world?”

Mary gave no more than a cursory smile. She stepped to her right and walked past Jake, entering the conference room and taking the strap of her dark-blue nylon briefcase from her shoulder. As she was placing her burden upon the table, she checked out of the corner of her eyes, making sure Jake was at her side before saying, as if to no one in particular, “I’ve always found our generation has the singularly unattractive habit of parodying what is reprehensible about our behavior and our ways of thought.” Immediately she wondered when she had become some sort of Puritan, but the line of thought disappeared as soon as she looked at Jake and saw not anger but interest in. . .

And she remembered that the thought she’d just expressed had not been her own but had rather come from a critical review of the advertisements for one of the television channels which brought back old programs from Mary’s childhood and well before that as well. A shudder passed up her spine, though she was sure she showed nothing on the surface, but then another shudder passed up her spine as she met Jake’s gaze eyeball to eyeball. He’d shown no more than a desire to be pleasant before Mary had made a comment which she had intended to puncture rather than make her suddenly attractive to this corporate reptile. Now she feared she’d awakened a diﬀerent interest on his part, but she smiled in a manner meant to be neutral and no more than polite. Turning more fully towards Jake who’d retreated a step to sit down, she told him, “Now we can mention the name of Baxton, Inc. I don’t think this room is bugged by any investment bankers wishing to stir up interest in competing bids.”